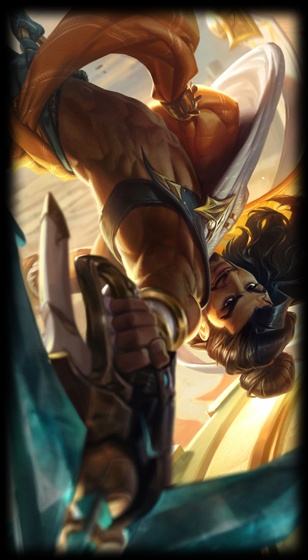 “Not everything happens for a reason. Some things need to be sorted out.”
~ Akshan
Champion Information
Region

Passive
Ability
Passive
Affects
Self
Every three hits from Akshan's Attacks and Abilities deals bonus damage and grants him a Shield if the target was a champion.

W
Ability
No Target
Affects
Self
Akshan passively marks enemy champions as Scoundrels when they kill his ally champions. If Akshan kills a Scoundrel, he resurrects the allies they killed, gains bonus gold, and clears all marks.

E
Ability
Direction
Affects
Self and Enemies
Damage Type
Physical
Akshan fires a grappling hook into terrain then swings around it, repeatedly firing at the nearest enemy while swinging. He can jump off early or gets knocked off when colliding with champions or terrain.
18 / 16.5 / 15 / 13.5 / 12
70
Comeuppance

Raising an eyebrow in the face of danger, Akshan fights evil with dashing charisma, righteous vengeance, and a conspicuous lack of shirts. He is highly skilled in the art of stealth combat, able to evade the eyes of his enemies and reappear when they least expect him. With a keen sense of justice and a legendary death-reversing weapon, he rights the wrongs of Runeterra’s many scoundrels while living by his own moral code: “Don’t be an ass.”

Dashing through the shadows of eastern Shurima, a righteous avenger stalks those who have harmed others. His punishment is swift, certain, and exacted by a curious weapon that rights the wrongs of his foes.

Raised on the streets of the city of Marwi, Akshan was introduced to injustice at birth. In a place where local warlords took what they wanted, most people survived by keeping their heads down and minding their own affairs. Try as he might, young Akshan could never manage to let bad deeds go unnoticed and was often quick to intervene when he saw someone being mistreated. This approach made the boy many powerful enemies, and on one fateful occasion, left him beaten within an inch of his life.

But luck was on his side. An old woman named Shadya found the boy unconscious in the street outside her dwelling. Though Marwian custom said she should not get involved, she took young Akshan inside and, against all odds, he pulled through.

As Akshan regained his faculties, he realized his savior was no ordinary woman. Shadya was a member of the Sentinels of Light, an ancient order committed to fighting Harrowings and eradicating agents of the Black Mist. She saw Akshan as a troubled youth, stubborn and defiant, but vulnerable. After butting heads with the boy over her numerous sentinel house rules, Shadya quickly discovered there was much to like about him. He had guts and a conscience—a combination seldom found in Marwi. Seeing the immense potential in the young man, Shadya made a deal with him: she would allow him to stay, free from the grasp of his countless enemies, and, in return, he would dedicate himself to the sentinel order.

Shadya and Akshan formed a fast bond as she taught him everything she knew about surviving as a solo sentinel. Akshan the scrappy street urchin grew into Akshan the full-grown bane of scoundrels. But even as Akshan’s skills grew by the day, he could see his mentor growing more distant, and more troubled.

At last, Shadya told her pupil the reason for her concern: A Harrowing was coming, bigger than any the world had ever seen, bearing an army of wraiths and ghouls from the Shadow Isles. Their only hope of stopping the cataclysm rested with the ancient sentinel weapons that lay buried within Shurima's crypts and tombs. If the world was to be saved from ruination, they needed to collect these weapons, and quickly.

To Shadya’s dismay, she found that the ancient weapons had already been plundered by local warlords. She pleaded with them to relinquish the artifacts for the fight against the inevitable Harrowing, but the warlords refused, determined to unlock the weapons’ mysterious power for themselves.

With time running out, Akshan and Shadya were forced to make do with what they had. As they took stock of their arsenal, Akshan discovered a particularly striking gun hidden away in the base’s vault. Alarmed, his mentor snatched it away and forbade Akshan from ever using it. The weapon, known as the Absolver, was imbued with an ancient enchantment that granted it a strange, unspeakable power—it could take the life of a killer and, by doing so, restore their most recent victims to life.

“It must not be wielded by anyone,” said Shadya. “Such matters of life and death are best left in the hands of fate.”

But Akshan still bristled at sentinel rules, and he had even stronger opinions on fate. He had spent his whole life seeing good people horribly mistreated while bad people did as they pleased without consequence. If fate was real, it definitely needed help—help that the Absolver could provide.

As his interest in the weapon deepened, Akshan continued to pry its history from Shadya and came to a shocking discovery: She had used the gun to save Akshan when she found him unconscious in the street all those years ago. With it, she’d slain the criminal who had nearly killed him, and, in doing so, restored young Akshan to life. He wondered: Why did he alone deserve to be revived by the gun? Surely there were others who were more worthy.

While Akshan questioned the antiquated rules of his order, his mentor continued to press the warlords to turn over their stolen weapons. Tensions between the two parties built until one tragic day Akshan returned home to find Shadya murdered in the street, almost exactly where he had fallen all those years ago.

Akshan knew what he had to do. He made some key alterations to the Absolver and set out into the scorching desert with the forbidden weapon, hungry for vengeance. Though he could not determine which of the warlords had killed his mentor, he knew one way to be certain: he would pick them off one by one until Shadya was returned to Runeterra.