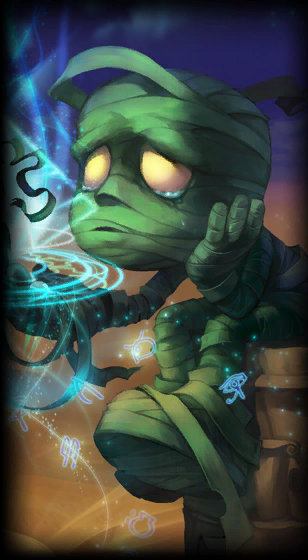 “Solitude can be lonelier than death.”
~ Amumu
Champion Information
Region

Q
Ability
Direction
Affects
Enemies and Self
Damage Type
Magic
Amumu tosses a sticky bandage at a target, stunning and damaging the target while he pulls himself to them.
16 / 15.5 / 15 / 14.5 / 14
70
Despair

W
Ability
No Target
Affects
Enemies
Damage Type
Magic
Overcome by anguish, nearby enemies lose a percentage of their maximum Health each second and have their Curses refreshed.
1
8 Per Second
Tantrum

E
Ability
No Target
Affects
Self and Enemies
Damage Type
Magic
Permanently reduces the physical damage Amumu would take. Amumu can unleash his rage, dealing damage to surrounding enemies. Each time Amumu is hit, the cooldown on Tantrum is reduced by 0.5 seconds.
9 / 8 / 7 / 6 / 5
35
Curse of the Sad Mummy

Legend claims that Amumu is a lonely and melancholy soul from ancient Shurima, roaming the world in search of a friend. Doomed by an ancient curse to remain alone forever, his touch is death, his affection ruin. Those who claim to have seen him describe a living cadaver, small in stature and wrapped in creeping bandages. Amumu has inspired myths, songs, and folklore told and retold for generations—such that it is impossible to separate truth from fiction.

A lonely and melancholy soul from ancient Shurima, Amumu roams the world in search of a friend. Cursed by an ancient spell, he is doomed to remain alone forever, as his touch is death and his affection ruin. Those who claim to have seen him describe Amumu as a living cadaver, small in stature and covered in bandages the color of lichen. Amumu has inspired myths, folklore, and legends told and retold for generations – such that it is impossible to separate truth from fiction.

The hardy folk of Shurima agree upon certain things: the wind always blows from the west in the morning; a full belly on a new moon is an ill omen; buried treasure hides under the heaviest of rocks. They do not agree, however, about the tale of Amumu.

One oft-told story links Amumu to the first great ruling family of Shurima who succumbed to a disease that corrupted flesh with hideous speed. The youngest child, Amumu, was quarantined in his chambers and befriended a servant girl who heard his cries through the walls. She regaled the lonely heir with courtly news and stories of her grandmother’s mystic powers.

One morning, the girl brought word that Amumu’s last remaining brother had passed away, making him Emperor of Shurima. Saddened that he had to bear this news alone, she unlocked his door and ran inside to comfort him face to face. Amumu threw his arms around her, but as they touched, he fell back, realizing he had condemned her to the same terrible fate as his family.

Upon the girl’s death, her grandmother placed a twisted blight on the young emperor. In her mind, Amumu had as good as murdered her kin. As the curse took effect, Amumu was trapped in his moment of suffering like a locust ensnared in honeyed amber.

A second tale whispers of another crown prince, one given to bouts of petulance, cruelty, and murderous vanity. In this telling, Amumu was crowned Emperor of Shurima at a young age, and convinced he was blessed by the sun, he forced his subjects to worship him as a god.

Amumu sought the fabled Eye of Angor, an ancient relic entombed in a gilded crypt, said to grant eternal life to whoever looked upon it with an unflinching heart. He hunted the treasure for years with a host of slaves who carried him through labyrinthine catacombs, sacrificing themselves to traps so the emperor could continue without hindrance. Amumu finally reached the cyclopean golden archway, where upon dozens of his stonemasons labored to breach the sealed door.

As the young emperor rushed within, determined to look into the Eye of Angor, his slaves seized their chance and sealed the stone doorway behind him. Some say the child emperor endured in the darkness for years, his loneliness driving him to insanity and causing him to claw at his own skin, which he was forced to wrap in bandages. His life was extended by the power of the Eye as he meditated on his past transgressions, but the gift was a double edged sword, for he was cursed to remain forever alone.

When a series of devastating earthquakes shattered the foundations of his tomb, the emperor escaped with no knowledge of how much time had passed, seeking to undo the suffering he had caused in life.

Yet another story of Amumu tells of the first and last Yordle ruler of Shurima, who believed in the innate goodness of the human heart. To prove his detractors wrong, he swore an oath to live as a beggar until he made one true friend, convinced his people would rally to help their fellow Shuriman.

Though thousands walked by the disheveled Yordle, not one stopped to offer a helping hand. Amumu’s sadness grew until he eventually died of a broken heart. But his death was not the end, for some swear the Yordle still wanders the desert, forever searching for someone who might restore his faith in humanity.

These stories, despite their differences, are woven with parallels. Whatever the circumstances, Amumu is doomed to exist in a broken state of emptiness, eternally alone and friendless. Fated to forever search for a companion, his presence is cursed and his touch is death. On long winter nights when the fire is never allowed to burn low, the sad mummy can sometimes be heard weeping in the desert, despairing that he’ll never know the solace of friendship.

Whatever Amumu searches for – atonement, kinship, or a single act of kindness – one thing is as certain as the western wind at dawn: he has yet to find it.