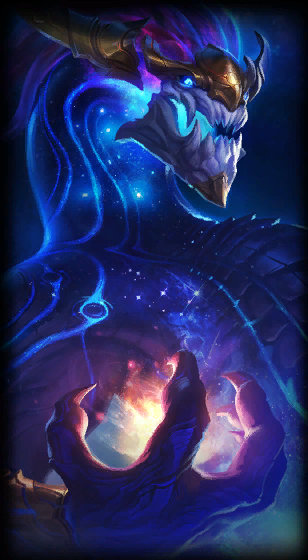 Center of the Universe

R
Ability
Direction
Affects
Enemies
Damage Type
Magic
Aurelion Sol projects a blast of pure starfire, damaging and slowing all enemies caught in it and knocking nearby enemies back to a safer distance.
110 / 90 / 70
100

Aurelion Sol once graced the vast emptiness of the celestial realm with wonders of his own devising, but was tricked by the Aspects of Targon into revealing the secrets of a sun that he himself created. His awesome power was channeled into immortal god-warriors to protect the apparently insignificant world of Runeterra—now, desiring a return to his mastery of the cosmos, Aurelion Sol will drag the very stars from the sky, if he must, in order to regain his freedom.

The appearance of a comet in the night sky is often said to portend upheaval and unrest. Under the auspices of such fiery harbingers, new empires rise, old cultures fall, and even the stars themselves may vanish from the heavens…

The truth is, perhaps, more unsettling.

The almighty being known as Aurelion Sol was already ancient before the rise of the mortal races of Runeterra. Born in the first breath of creation, he and those like him roamed the vast nothingness of a pristine celestial realm, seeking to fill this canvas of incalculable breadth with marvels whose twinkling spectra would bring fulfillment and delight to all who witnessed them.

As he wandered, Aurelion Sol seldom encountered any equals. The eternal Aspects were dispassionate and incurious things, contributing little to existence, content only to compose amusingly self-centered philosophies on the nature of creation.

But then, bathed in the light of a fairly unremarkable sun he had crafted eons earlier, he discovered something. A world. New realms.

He did not know who had created this world, or why—only that it had not been him.

The Aspects, who seemed unusually invested in it, implored him to come closer. There was life here, and magic, and fledgling civilizations that cried out for guidance from beings greater than themselves. Flattered by this new audience to his supreme majesty, Aurelion Sol descended to bask in their adulation, in the form of a vast and terrible dragon from the stars.

The tiny inhabitants of the insignificant land of Targon named him for the golden light of the sun he had gifted them, and the Aspects commanded them to bring forth a suitable offering in return. The mortals climbed to the peak of their tallest mountain, and presented him with a splendorous crown, crafted with careful and cunning magic, and etched with the inscrutable patterns of the celestial realm.

From the moment it touched Aurelion Sol’s brow, he knew this was no gift at all.

The accursed thing clamped in place with unimaginable force, enough that even he could not remove it, and he could feel his knowledge of the sun and its creation being stolen and scrutinized by intelligences vastly inferior to his own. Worse still, the power of the crown hurled him back into the heavens, and prevented him from getting any closer to that world again.

Instead, he was forced to watch as the duplicitous Aspects of Targon set the mortals to work in the construction of a great, gleaming disc. With this, they channeled his celestial power to raise up immortal god-warriors, for some unknown conflict that was apparently still to come.

Outraged, Aurelion Sol could see other stars fading across the firmament for lack of care and maintenance, and he strained to break free of the crown’s control. It was he who had birthed their light into the universe! Why must he be shackled, now, by the Aspects and their lowly pawns? He roared with glee when the Sun Disc failed… only to see a second, more powerful one take its place. Eventually, resigned to his fate, he saw the god-warriors cast down their rivals, then chittering creatures of pure darkness, and eventually each other.

Then, in little more than the blink of a star dragon’s eye, the world was ravaged by a succession of sorcerous catastrophes, and Aurelion Sol finally knew that Targon and the hated Aspects were all but defenseless. As he cautiously circled back, he realized the magic that bound him was weakening. Flecks of gold began to fall from his crown, each one blazing across the skies like a comet.

Driven by the tantalizing possibilities of freedom and revenge, Aurelion Sol now regards Runeterra with simmering, eternal fury. Surely, it is here, upon this world, that the cosmic balance will tip in his favor once more—and with it, the universe itself shall bear witness to the fate of those who dare steal the power of a star forger.