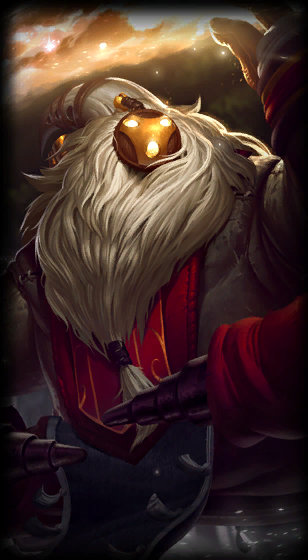 “The chimes of his footsteps are echoes of change.”
~ Ryze
Champion Information
Region

W
Ability
Ground
Affects
Allies
Reveals a healing shrine which powers up over a short time, disappearing after healing and speeding up the first ally that touches it.
14
70
Magical Journey

E
Ability
Direction
Affects
Allies and Enemies
Bard opens a portal in nearby terrain. Allies and enemies alike can take a one-way trip through that terrain by moving into the portal.
22 / 20.5 / 19 / 17.5 / 16
30
Tempered Fate

A traveler from beyond the stars, Bard is an agent of serendipity who strives to maintain the harmony between creation, and the cold indifference of what lies beyond it. Many Runeterrans sing songs that ponder his extraordinary nature, yet they all agree that the cosmic vagabond is drawn to artifacts of great magical power. Surrounded by a jubilant choir of helpful meeps, it is impossible to mistake his actions as malevolent, as Bard always serves the greater good… in his own odd way.

It is said that most inhabitants of the celestial realm see their home as a wondrous and vivid tapestry, woven with prismatic threads of purest starlight. However, for one prodigious entity, the intangible and everlasting beauty of this dimension is not seen, but heard—for Bard, a troubadour as enigmatic as he is eternal, the wondrous firmament is a symphony of mystic, ambrosial music.

In the beginning, Bard had drifted without purpose or perspective through a silent cosmos, but with a deep sense of anticipation that something miraculous would eventually come to fill it. Fate did not disappoint, and with the forging of the first stars, the silence was broken and the first rapturous notes of creation rang in Bard’s ear.

He traveled the swirling harmonies between the stars, along with the tiniest wisps of residual inspiration and thought left over from their birth. These semitonal, incomplete motes of energy—or meeps—were drawn to him whenever he added his own voice to the cosmic opus, forever ringing in one perfect accord.

This was not his masterpiece, yet he gloried in it all the same.

But after a measureless interval, a dissonance began to creep in. It was so small at first, Bard might have missed it, but the ever-doting meeps drew his attention to a failed dynamic shift here, an unexpected syncopation there, and even the growing absence of sound where, before, sound had been.

Bard scoured the celestial realm for clues, until he discovered the source. It was the most curious of things—a world with a song all of its own.

Driven by unknown magic, the music produced by Runeterra was as primitive, unevolved, and chaotic as the mortal beings that lived there… and yet it had an inherent beauty, like the rolling thunder of a storm, or the melodious knocking of wooden chimes in the wind that precedes it. Bard would have merely appreciated it for what it was, but unfortunately this particular song had gone far beyond a mere counterpoint to the celestial whole, and was becoming destructive. Something had to be done.

Touching down in the First Lands of Ionia, Bard and his attendant meeps crossed into the material realm. All at once, his ears became like eyes, and he fashioned himself a simple body from the trinkets and fabrics of a traveling shawm-player’s wagon, including a beguiling mask—circular, with three holes in the face.

He walked the world for an age, confusing and delighting those he encountered along the way, and found the state of things far more complex than he had first imagined. Many objects of wild and unpredictable power seemed to have made their way erroneously into Runeterra, and were disrupting the natural cosmic order of things. Casting his gaze back to the heavens, Bard deduced that some other power within the celestial realm was at work here… though to what end, he could not guess.

Regardless, he has taken to the role of caretaker, retrieving anything out of place and returning it to where it can do no further harm. Though this may be only the first step in bringing the universe back in tune, it may also be the only way this world can be saved from what lies beyond it.

And Bard is not blind to the future. He can see a great conflict approaching—one fought not in any single realm, but in all—and awaits the time when he must finally pick a side.