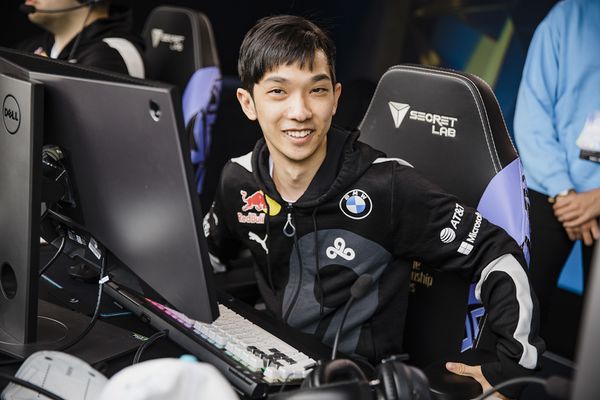 Robert "Blaber" Huang is an American player who is playing as a Jungler for Cloud9.

Blaber, initially known as blaberfish2, started his competitive career on Wildcard Gaming Blue. He competed in the 2017 NA CS Open qualifiers, but the team failed to qualify after losing 2-0 against Solaris, which would see them place top 32 and far from qualifying for the main qualifiers. His first return to competition would come at the end of 2017, competing in the Tyler1 Championship Series, playing with the likes of Allorim, Shoryu and Linsanity on Beans for Dinner. The team won their first round, but lost against MLGB E-SPORTS CLUB in the following round, resulting in a 5-8th exit. Blaber's professional career kicked off during the 2017 Scouting Grounds event, where Cloud9 had 3 draft pick slots to make use of. Blaber competed on Team Ocean, and lost just a single game in the tournament, winning the finals 2-0. This resulted in Blaber getting drafted by Cloud9.

Blaber made his debut in the 2018 NA Academy Summer Split, securing 16 out of 18 wins in the regular season and beating CLG Academy 3-1 in the finals, which would bring him his first title of his career. Alongside the Academy debut, Blaber made his LCS debut on Cloud9 following a streak of bad results, which resulted in the team improving significantly and securing a playoffs slot against everyone's expectations. They ended as the runner-ups in the summer split, but Blaber's team managed to qualify for Worlds 2018 through the NA Regional Finals. At Worlds 2018, Blaber would share his spot with Svenskeren, the player he initially replaced. Cloud9 sweeped their group but barely beat Gambit Esports in a 5-game series to qualify for the main event. Despite this nailbiter, Cloud9 managed to make it out of their group ahead of Team Vitality and Gen.G Esports, and they would eventually end their run in the semi-finals following a loss against Fnatic.

2019 was a return to academy for Blaber, as Cloud9 decided to stick with Svenskeren for their main roster. In his two academy splits, the team placed 2nd in Spring, and lost against Ssumday's 100 Thieves in the semi-finals of Summer, resulting in a 3-4th place finish. Blaber once again joined Cloud9 for Worlds 2019, splitting the group stage games with Svenskeren equally. It resulted in a 3rd place in their group, eliminating Cloud9 from Worlds in a 9-12th place finish, only beating Hong Kong Attitude at the event.

For spring 2020, Cloud9 completely rebuilt their roster, with Zven joining from TSM, Vulcan joining from Clutch Gaming and Blaber being promoted from Cloud9 Academy permanently. Despite doubt from the community, Blaber's Cloud9 secured their first LCS title in 6 years after beating FlyQuest 3-0 in the finals, with Blaber taking the MVP award home. Unfortunately, the team couldn't attend MSI 2020, as it was cancelled due to the ongoing pandemic. The team didn't make any changes heading into summer, but failed to perform when it counts, losing against FlyQuest and TSM in the playoffs and finishing 4th, just outside of a qualifying slot for Worlds 2020.

Ahead of the 2021 season, Cloud9 signed Fudge and Perkz, which would help Blaber acquire his second LCS title and MVP award with a 3-2 finals win against Team Liquid, resulting in a qualification for MSI 2021. Despite the team being hyped heading into the tournament, Blaber and Cloud9 failed to qualify for the playoffs stage, notably being the only team to lose against the Australian invite Pentanet.GG.