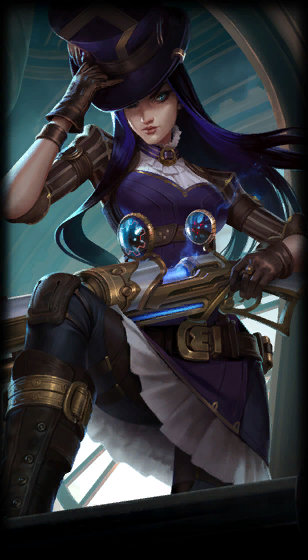 "To be the best hunter, you have to be able to think like your prey."
Champion Information
Region

Passive
Ability
Passive
Affects
Self
Damage Type
Physical
Every few basic attacks, or against a target she has trapped or netted, Caitlyn will fire a headshot dealing bonus damage that scales with her critical strike chance. On trapped or netted targets, Caitlyn's Headshot attack range is doubled.
Piltover Peacemaker

E
Ability
Direction
Affects
Self and Enemies
Damage Type
Magic
Caitlyn fires a heavy net to slow her target. The recoil knocks Caitlyn back.
16/14.5/13/11.5/10
75
Ace in the Hole

Renowned as its finest peacekeeper, Caitlyn is also Piltover’s best shot at ridding the city of its elusive criminal elements. She is often paired with Vi, acting as a cool counterpoint to her partner’s more impetuous nature. Even though she carries a one-of-a-kind hextech rifle, Caitlyn’s most powerful weapon is her superior intellect, allowing her to lay elaborate traps for any lawbreakers foolish enough to operate in the City of Progress.

Born to a wealthy and influential family of hextech artificers, Caitlyn swiftly learned the social graces of life in Piltover, but preferred to spend her time in the wilder lands outside it. Equally adept at mingling with the moneyed citizens of the City of Progress or stalking a deer through the mud of the forest, she could confidently track a bird on the wing over the merchant districts, or put a shot through the eye of a hare at a hundred paces with her father’s repeater musket.

Caitlyn’s greatest assets, however, were her intelligence and willingness to learn from her parents, who reinforced her understanding of right and wrong. Though the family’s engineering skills had made them wealthy, her mother always warned of Piltover’s seductions, and its gilded promises that could harden the kindest heart. At first, Caitlyn paid little heed—to her, Piltover was a place of beauty and order that she cherished after each trip into the wild.

All that was to change one Progress Day, some years later.

Caitlyn returned to find her home ransacked and empty. The family retainers were all dead, and there was no trace of her parents. Caitlyn secured the house, and immediately set out to find them.

Tracking within the confines of a city was very different from hunting in the wild but, one by one, Caitlyn located the thugs who had invaded her family home. None knew the identity of the individual who hired them—only a proxy with the initial C. Even so, the trail eventually led Caitlyn to a secret hextech laboratory where her mother and father were being forced to work for a rival merchant clan, and she rescued them. The Piltover Wardens, acting upon her information, later arrested the clan leader behind the kidnapping, though no trace could be found of the mysterious “C”.

Caitlyn and her parents began to rebuild their lives… but something fundamental had changed in her. She now recognized ambition and greed were as deadly as a cornered beast, lurking just beneath Piltover’s gleaming veneer. She had seen people in need of help, and knew she could help them. And, though she loved her parents dearly, Caitlyn had no desire to learn the family trade.

She established herself as an investigator of sorts, utilizing her hunting skills to act as a finder of lost people and retriever of stolen property. For her twenty-first birthday, Caitlyn’s parents presented her with a hextech rifle of exquisite artifice, with greater accuracy than any musket. The weapon could take a variety of specialized shells, and be easily modified in the field, and so went with Caitlyn whenever she took a case.

She turned a tidy profit in a profession that taught her, first-hand, both the allure and danger of untested hextech and chemtech development. In just a few years, she made a name for herself as someone who could help with matters mundane and… more esoteric. After a particularly traumatic case involving a missing hextech device and a series of child abductions, Caitlyn was summoned by the Wardens.

She had been recommended by one of their number who had also developed something of an affinity for stranger cases—and their battle with a host of rogue chimerics in the employ of a lunatic chem-researcher driven mad by his own concoctions led to her being offered a formal position as a sheriff. At first, Caitlyn refused, but eventually came to realize that the Wardens’ resources could potentially get her closer to discovering the true identity of “C”, the only person still unaccounted for following the attack on her family home.

Caitlyn has since become a highly respected officer within the ranks of the Piltover Wardens, maintaining order in the City of Progress. She recently partnered with a new recruit from Zaun, the brash and reckless Vi. How such an unlikely pairing came about—and been proven so effective—is the subject of wild rumor and tavern speculation among their fellow Wardens, as well as those they haul away to jail.