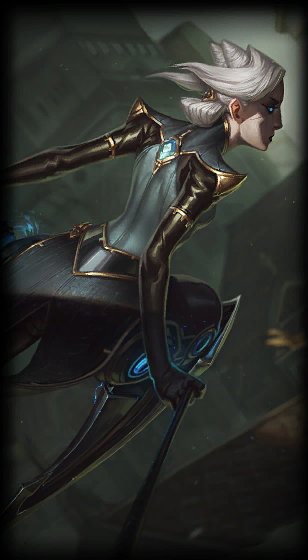 “Precision is the difference between a butcher and a surgeon.”
~ Camille
Champion Information
Region

Passive
Ability
Passive
Affects
Self
Basic attacks on champions grant a shield equal to a percentage of Camille's maximum health against their damage type (Physical or Magic) for a brief duration.
20 / 15 / 10
Precision Protocol

Q
Ability
No Target
Affects
Self
Damage Type
Physical
Camille's next attack deals bonus damage and grants bonus movement speed. This spell can be recast for a short period of time, doing significantly increased bonus damage if Camille delays a period of time between the two attacks.
9 / 8.25 / 7.5 / 6.75 / 6
25
Tactical Sweep

E
Ability
Direction
Affects
Enemies
Damage Type
Physical
Camille pulls herself to a wall, leaping off and knocking up enemy champions upon landing.
16 / 15 / 14 / 13 / 12
70
The Hextech Ultimatum

Weaponized to operate outside the boundaries of the law, Camille is the Principal Intelligencer of Clan Ferros—an elegant and elite agent who ensures the Piltover machine and its Zaunite underbelly run smoothly. Adaptable and precise, she views sloppy technique as an embarrassment that must be put to order. With a mind as sharp as the blades she bears, Camille's pursuit of superiority through hextech body augmentation has left many to wonder if she is now more machine than human.

Most of the family’s wealth came through harvesting a rare crystal from the brackern, a creature native to Shurima. These hex-crystals—or “first crystals”—contained power normally only wielded by those born with innate magical ability. After Camille’s great-great aunt lost an arm during an early expedition, her sacrifice inspired the Ferros family motto: “For family, will I give.”

The brackern were a limited resource, and Camille's family had to augment the crystals they’d accumulated. Utilizing shadow investments in chemtech and runic alchemy, they developed less powerful, but easier to make, synthetic hex-crystals.

Yet there were consequences—synthetic crystal manufacturing has long been rumored to heavily contribute to the Zaun Gray. Furthermore, it was only through espionage, intimidation, and murder that Clan Ferros held its monopoly on this priceless commodity, and ensured its uninterrupted production in Zaun, maintaining the family’s place in Piltover’s illustrious Bluewind Court.

As the eldest surviving child of Clan Ferros’ masters, Camille received every educational advantage. She had exceptional tutors, learning to speak several foreign languages and play the cellovinna at a concert-master level. Camille also learned to read and write Ancient Shuriman while assisting her father on digs in the Odyn Valley.

Traditionally, one of the younger children would become their family's principal intelligencer, working with the clan master to secure their family’s success by any means necessary. However, Camille's younger brother, Stevan, had a weak constitution, and so Camille took his place. He jealously watched her embrace her additional training, and she became quite adept in combat, reconnaissance, and interrogation.

When Camille was twenty-five, augmented Zaunite thugs attacked her and her father, intent on stealing lucrative trade secrets. Camille’s father succumbed to his wounds, and in anguish, her mother died soon after. Stevan became clan master, and he doubled the clan’s research in human hextech augmentation, eager to prove himself as a strong leader.

After a year of mourning, Stevan oversaw the induction of Hakim Naderi—a promising young crystallographer from the Shuriman coastal city of Bel'zhun—as the family’s lead artificer.

Camille requested hextech augmentation from Hakim to push her beyond her human limitations. Hakim was instantly enamored with her, and they bonded over the preparations and late night stories of Shurima… and eventually, Camille returned Hakim's feelings. Their affair grew reckless, as they knew the surgery would conclude their time together. Hakim would move onto other projects, and Camille would once again be fully committed to the principal intelligencer’s duties. More than that, Hakim worried that in carving away Camille's heart, he might remove her humanity.

Days before Camille's operation, Hakim proposed marriage and begged her to run away with him. For the first time in her life, Camille was torn.

Stevan had no such conflict, as he needed Camille to execute his vision. When he learned of the secret proposal, he devised a plan—the next time Camille and Hakim were together, Stevan set himself up to be attacked. When she saw her brother bruised and bloodied, Camille recognized what could happen when her attention was divided.

Hakim pleaded with Camille, but she wouldn’t listen. For family, she would give. She ended her relationship with Hakim, insisting her surgery go forward.

He was the only one who could safely perform the operation, and so he excised Camille’s heart and replaced it with hextech—then resigned. When she awoke, the lab she and Hakim had shared was abandoned.

Camille focused on her work. She took on further refinements, including bladed legs, grapple-spindled hips, and other, minor hex-augmentations, leading some to wonder how much of the woman was left. And as Clan Ferros amassed more power and wealth, Camille’s missions became darker and more deadly.

Thanks to her hextech heart, she did not age—but the years were not so kind to her brother. Yet even as Stevan's body grew more frail, his iron grip on the clan remained.

Eventually, Camille uncovered the depth of Stevan's betrayal, and realized his machinations were no longer in the family’s best interests. In that moment, she discarded the last sentiment she felt toward her brother.

After installing her favorite grand-niece as clan master, Camille now runs the family's public affairs as well as its more shady operations. As a solver of… difficult problems, she embraces her more-than-human transformation and the cutting judgment it affords her—but a strange, mournful keening in her hextech heart may yet prove a troubling portent.

Regardless, Camille refuses to sit idle, and gains invigoration from well-executed industrial espionage, a fresh-brewed cup of tea, and long walks in the Gray.