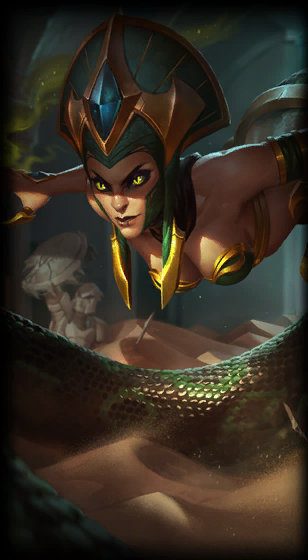 "There is no antidote for me."
Champion Information
Primary Role

Cassiopeia spews venom in an arc, leaving toxic clouds for 5 seconds.Enemies in the clouds are continually afflicted with Debilitating Poison, inflicting a decaying 40/50/60/70/80% slow and grounding them, prohibiting the use of Movement abilities. They also take 20/35/50/65/80 (+15% of Ability Power) magic damage per second.Miasma has a minimum cast range.
18/17/16/15/14
70
Twin Fang

R
Ability
Direction
Affects
Enemies
Damage Type
Magical
Cassiopeia releases a swirl of magical energy from her eyes, stunning any enemies in front of her that are facing her and slowing any others with their back turned.

Cassiopeia is a terrifying creature - half woman, half snake - whose slightest glance brings death. The youngest daughter of one of Noxus's most influential families, she was once a beautiful and cunning temptress capable of manipulating the hardest heart. Transformed by the venom of an ancient Shuriman tomb guardian, she continues to serve Noxian interests as she always has, just in a more... visceral way.