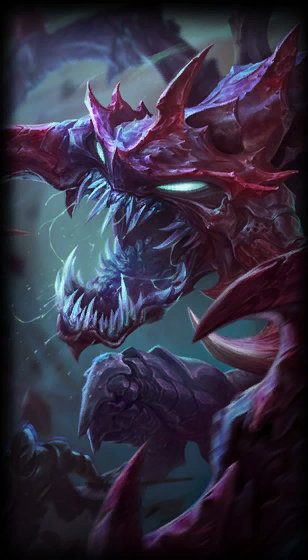 “Your souls will feed the Void!”
~ Cho'Gath
Champion Information
Region

Passive
Ability
Passive
Affects
Self
Whenever Cho'Gath kills a unit, he recovers Health and Mana. The values restored increase with Cho'Gath's level.
Rupture

From the moment Cho’Gath first emerged into the harsh light of Runeterra’s sun, the beast was driven by the most pure and insatiable hunger. A perfect expression of the Void’s desire to consume all life, Cho’Gath’s complex biology quickly converts matter into new bodily growth—increasing its muscle mass and density, or hardening its outer carapace like organic diamond. When growing larger does not suit the Void-spawn’s needs, it vomits out the excess material as razor-sharp spines, leaving prey skewered and ready to feast upon later.

There is a place between dimensions, between worlds. To some it is known as the Outside, to others it is the Unknown. To those that truly know, however, it is called the Void. Despite its name, the Void is not an empty place, but rather the home of unspeakable things - horrors not meant for minds of men. Cho'Gath is a creature born of the Void, a thing whose true nature is so awful most will not speak its name. Its fellows have been poking at the walls that divide dimensions for a crack, a way into Runeterra, where they can visit their own personal paradise of horror upon the world. They are called the Voidborn, creatures so ancient and terrible that they have been removed from history altogether. It is rumored that the Voidborn command vast armies of unspeakable creatures on other worlds, that they were once driven from Runeterra by powerful magic lost to antiquity.

If such tales are true, then the rumors that follow must be equally true - that one day, the Voidborn will return. Even now, something dark stirs in Icathia. Cho'Gath, an alien creature of malice and violence, causes all but the most stalwart to cringe in fear. Cho'Gath even appears to feed on its predations, growing and swelling as it gorges itself. Worse yet, the creature is intelligent, perhaps greatly so, hinting at the sentient horror of the Void.