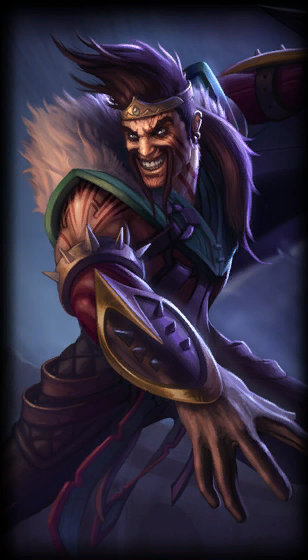 “'The best' is wherever I decide to set the bar each day.”
~ Draven
Champion Information
Region

Passive
Ability
Passive
Affects
Self
Draven gains his fans' Adoration when he catches a Spinning Axe or kills a minion, monster, or tower. Killing enemy champions grants Draven bonus gold based on how much Adoration he has.
Spinning Axe

Q
Ability
No Target
Affects
Self
Damage Type
Physical
Draven's next attack will deal bonus physical damage. This axe will ricochet off the target high up into the air. If Draven catches it, he automatically readies another Spinning Axe. Draven can have two Spinning Axes at once.
12 / 11 / 10 / 9 / 8
45
Blood Rush

W
Ability
No Target
Affects
Self
Draven gains increased Movement Speed and Attack Speed. The Movement Speed bonus decreases rapidly over its duration. Catching a Spinning Axe will refresh the cooldown of Blood Rush.
12
40 / 35 / 30 / 25 / 20
Stand Aside

R
Ability
Direction
Affects
Enemies
Damage Type
Physical
Draven hurls two massive axes to deal physical damage to each unit struck. Whirling Death slowly reverses direction and returns to Draven after striking an enemy champion. Draven may also activate this ability while the axes are in flight to cause it to return early. Deals less damage for each unit hit and resets when the axes reverse direction. Executes enemies who have less health than Draven's number of Adoration stacks.
100 / 90 / 80
100

In Noxus, warriors known as reckoners face one another in arenas where blood is spilled and strength tested—but none has ever been as celebrated as Draven. A former soldier, he found that the crowds uniquely appreciated his flair for the dramatic, not to mention the spray of blood from each of his spinning axes. Addicted to the spectacle of his own brash perfection, Draven has sworn to defeat whomever he must to ensure that his name is chanted throughout the empire forever more.

Even as an orphan on the streets of Basilich, Draven was headstrong and full of bravado, frequently getting into vicious brawls with older street children and shady underworld thugs. While supremely confident in his own ability—some would say overconfident—it is unlikely he would have survived childhood had it not been for his older brother, Darius, who invariably finished the fights Draven started.

When Basilich fell to the warhosts of Noxus, the brothers came to the attention of a captain named Cyrus, after Draven made an ill-considered attempt on his life. Impressed with their fighting spirit, Cyrus allowed them to join the Noxian ranks.

For years, the brothers fought as part of Cyrus’ warhost—yet while Darius took to this life easily, Draven grew steadily more bored. His martial skill was beyond question, but the daily drudgery of soldiering felt like too much effort for too little reward… and not enough personal glory.

Darius inevitably rose to command his own warband, and Draven joined him. However, if he thought that would be easier, or a way to achieve greater individual recognition, he was sorely disappointed.

Some say Draven chose to leave Darius’ command. Some say he was forced out. Either way, his skills were highly sought after as a champion and duelist, and he was enticed to join a succession of warbands during the occupation of Ionia, before ending up with a fairly respectable contract in the Reckoning pits.

For centuries, the gladiatorial Reckoners had performed a vital role in Noxus—punishing criminals and settling disputes between the noble houses—and Draven was determined to receive the riches, adoration, and renown he felt he deserved. However, with long, protracted wars on many fronts, the spectacle was beginning to lose its appeal for the common citizen. As the attention of the crowds drifted, Draven fell into a slump, spending more and more time in the seedier drinking halls and gambling dens of the capital.

He was washed-up and broke when the former general Jericho Swain found him.

Swain had a plan to reclaim Noxus’ lost glory, and needed Draven’s help to achieve it. Perhaps Swain only enlisted him as a way to ensure his brother Darius’ support after the fact. Regardless, Draven proved integral to Swain’s plan—to depose the Grand General himself, Boram Darkwill.

Standing triumphant with Swain, Draven smiled for the first time in months as the cheers of the Noxian people washed over him.

But duty called. In the days and weeks following this unprecedented coup, many among the noble elite refused to honor Swain’s succession, so they were sentenced to death in the arena.

One condemned man escaped his handlers ahead of his execution. Operating on pure instinct—as was ever his wont—Draven leapt from the high balcony and hurled a pair of axes at the fleeing man, cutting him down in a heartbeat. After a moment of stunned silence, the crowd roared their approval. Draven retrieved his axes, spinning them high in the air, playing to his new fans, and savoring their rapturous applause.

Soon enough, an enterprising (and diminutive) promoter, tired of paying to house, feed, and train Reckoners only for them to die in front of dwindling audiences, approached Draven with an idea. What if the drama of the classic pit fights could be combined with Draven’s natural showmanship?

The Reckoners quickly became entertainers as much as combatants, each with their own carefully constructed backstory, fighting style, and flamboyant personality. The fights were often bloody—this was still Noxus after all—but far less often ended in death. The rivalries, trash-talking, and intrigue between the best-known Reckoners became the stuff of legend throughout the empire, but none were talked about more than Draven.

For a time he lived the high life, receiving invitations to a never-ending stream of parties and banquets, mixing with the wealthy and influential of Swain’s new Noxus. He even reconciled with Darius, and would occasionally still march out with the warhosts, defeating enemy champions and generals in single combat.

Nevertheless, Draven has started to grow restless once again. He has all that he could have ever imagined, and more, but now dreams of the day when the whole world knows his name.