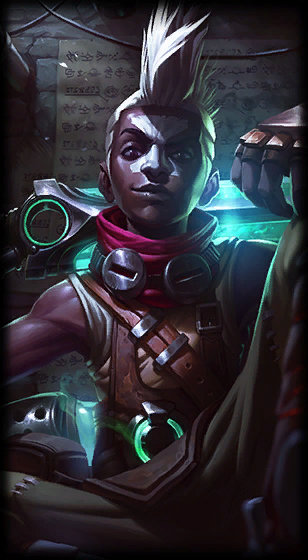 “My devices work best when they don’t work as intended… which is most of the time.”
Champion Information
Region

Passive
Ability
Passive
Affects
Enemies and Self
Damage Type
Magic
Every third attack or damaging spell on the same target deals bonus magic damage, and grants Ekko a burst of speed if the target is a champion.
Timewinder

Q
Ability
Direction
Affects
Enemies
Damage Type
Magic
Ekko throws a temporal grenade that expands into a time-distortion field upon hitting an enemy champion, slowing and damaging anyone caught inside. After a delay, the grenade rewinds back to Ekko, dealing damage on its return.
9/8.5/8/7.5/7
50/60/70/80/90
Parallel Convergence

W
Ability
Ground
Affects
Enemies and Self
Damage Type
Magic
Ekko's basic attacks deal bonus magic damage to low health enemies. He can cast Parallel Convergence to split the timeline, creating an anomaly after a few seconds that slows enemies caught inside. If Ekko enters the anomaly, he gains shielding and stuns enemies by suspending them in time.
22/20/18/16/14
30/35/40/45/50
Phase Dive

E
Ability
Direction
Affects
Self and Enemies
Damage Type
Magic
Ekko rolls evasively while charging up his Z-Drive. His next attack deals bonus damage and warps reality, teleporting him to his target.
9/8.5/8/7.5/7
40/45/50/55/60
Chronobreak

R
Ability
No Target
Affects
Self and Enemies
Damage Type
Magic
Ekko shatters his timeline, becoming untargetable and rewinding to a more favorable point in time. He returns to whenever he was a few seconds ago, and heals for a percentage of the damage received in that duration. Enemies near his arrival zone take massive damage.
110/80/50
100

A prodigy from the rough streets of Zaun, Ekko manipulates time to twist any situation to his advantage. Using his own invention, the Z-Drive, he explores the branching possibilities of reality to craft the perfect moment. Though he revels in this freedom, when there’s a threat to his friends, he’ll do anything to defend them. To outsiders, Ekko seems to achieve the impossible the first time, every time.

Born with genius-level intellect, Ekko constructed simple machines before he could crawl. His parents, Inna and Wyeth, vowed to provide a good future for their son—Zaun, with all its pollution and crime, would only stifle Ekko, whom they felt deserved the wealth and opportunities of Piltover. Throughout his youth he watched his parents age beyond their years, toiling for too many hours under dangerous conditions in suffocating factories. They earned meager wages while greedy factory owners, and sneering Piltovan buyers, profited immensely from their labor.

It would all be worth it, they reasoned, if it meant their son could one day rise to the city above.

Ekko saw things differently. Beyond Zaun’s flaws, he saw a dynamic place overflowing with energy and potential. Zaunites’ industry, resourcefulness, and resilience stirred a hotbed of pure innovation. They had built a thriving culture from catastrophe, and flourished where others would have perished. That spirit captivated Ekko, and spurred him to a youth of wild invention and innovation.

He wasn’t alone. He befriended scrappy orphans, inquisitive runaways, and eager upstarts. Zaunites tended to eschew formal education in favor of apprenticeships, but these “Lost Children of Zaun” looked to the labyrinthine streets to be their mentor. They wasted time in glorious, youthful fashion—foot races through the border markets, or daring climbs from the Sump to the Promenade. They ran wild and free, answering to no one.

One night, on a solo trek into the rubble of a recently demolished laboratory, Ekko made an astonishing find: a shard of blue-green crystal that glittered with magical energy. Every child of Zaun heard tales of hextech, said to power weapons and heroes alike. Such a thing had the potential to change the world, and now he held a broken one. He scrambled to find more pieces, but the crunching footfalls of teched-up enforcers told him he wasn’t the only one looking. Ekko barely escaped, and returned to his home.

He experimented madly with the crystal. During one less-than-scientific attempt, the gem exploded into a vortex of shimmering dust, triggering eddies of temporal distortion. Ekko opened his eyes to see several splintered realities—and several “echo” versions of himself—staring back in sheer panic amid the fractured continua.

He’d really done it this time.

After some tense coordination between Ekko and his paradoxes, they managed to contain and repair the hole he had torn in the fabric of reality. Eventually, he harnessed the shattered crystal’s temporal powers into a device that would allow him to manipulate small increments of time… at least in theory.

On his name day, his friends badgered him into climbing the ancient clocktower known as Old Hungry, so Ekko brought the untested device along with him.

The Lost Children climbed, stopping occasionally to paint an obscene caricature or two of prominent Pilties. They were near the top when a handhold gave way, sending one of Ekko’s friends tumbling to certain doom. Instinctively—as if he’d done it a thousand times before—Ekko activated his device. The world shattered around him, and he was wrenched backward through swirling particles of time.

Then Ekko was back, watching his friend reach again for the same rotting plank. The plank broke, the boy fell… but Ekko was ready this time, diving to the edge and grabbing him by the shirt. Ekko tried to swing him to safety, but his friend became caught in the tower’s clockwork gears, and—

Several attempts later, Ekko finally saved his friend’s life. But to his crew, Ekko’s supernatural reflexes had saved their friend before anyone even realized the danger. He told them about the crystal and made them swear to secrecy. Instead, they dared each other to new heights of foolishness, knowing Ekko had the means to pluck them out of danger.

With each trial, and so much error, the time-warping device—which Ekko dubbed the Zero Drive—grew more and more stable. The only limit was how many do-overs his body could take before exhaustion set in.

Ekko’s time-bending antics have made him a person of interest to some of Zaun and Piltover’s most inventive, most powerful, and most dangerous individuals. But his only interest is in his friends, his family, and his city. He dreams of the day when his hometown rises up to dwarf the so-called City of Progress, when Piltover’s golden veneer will be overshadowed by the towering ingenuity and relentless spunk of a Zaun born not from generations of privilege, but from sheer daring. He may not have a plan yet, but he’s got all the time in the world.

After all, if Ekko’s Z-Drive can change the past, how hard can it be to change the future?