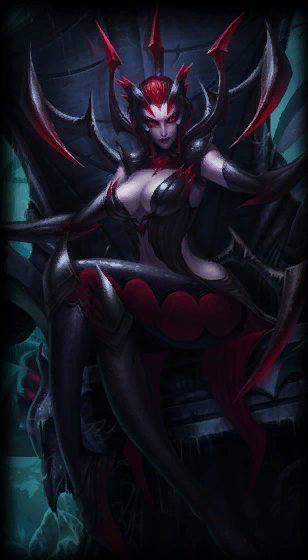 “Beauty is power too, and can strike swifter than any sword.”
~ Elise
Champion Information
Region

E
Ability
Direction
No Target
Affects
Enemies
Self
Human Form: Stuns the first enemy unit hit and reveals them if they are not stealthed.

Spider Form: Elise and her Spiderlings ascend into the air and then descend upon target enemy. After descending on an enemy target, Elise's bonus damage and healing from Spider Queen is increased.
12 / 11.5 / 11 / 10.5 / 10
50
Spider Form

R
Ability
No Target
Affects
Self
Transforms into a menacing spider, reducing her attack range in exchange for movement speed, new abilities, and a Spiderling swarm that will attack her foes.
4

Elise is a deadly predator who dwells in a shuttered, lightless palace, deep within the oldest city of Noxus. She was once the mistress of a powerful noble house, until the bite of a vile spider-god transformed her into something utterly inhuman, yet still beautiful—an arachnoid creature, drawing unsuspecting prey into her web. Elise now feeds upon the naive and the faithless, and there are few who can resist her seductions.

The Lady Elise was born centuries ago to House Kythera, one of the oldest bloodlines of Noxus, and swiftly learned the power of beauty to influence the weak.

When she came of age, she entertained the courtship of Berholdt, heir to House Zaavan. Their union was opposed by many, since it would strengthen Kythera at Zaavan’s expense—but Elise worked hard to beguile her intended husband, and manipulated her detractors to secure a betrothal.

Unbeknown to her, this political marriage had been planned for many years by shadowy forces working behind the scenes throughout the empire, with Berholdt Zaavan a mere pawn in a much larger game. Even so, it was an unexpected twist that Elise should dominate him so completely, and while he remained the face of his house, it was clear who was in charge. As time passed, his resentment grew.

One evening, over a typically frosty dinner, Berholdt revealed he had poisoned her wine, and demanded Elise withdraw from society and allow him to take up the reins of power. Knowing he would have the antidote about his person, Elise played the role of a remorseful wife, weeping and begging her husband’s forgiveness. Just as it seemed he might be convinced, she snatched up a knife and plunged it into his heart.

Even with the antidote, Elise was bedridden for weeks… and it was then that the Pale Woman approached her.

The enigmatic mistress of “the Black Rose” spoke of a secret society where hidden knowledge and sorcery were shared among those who could be trusted, and kept from those who could not. In truth, the Pale Woman did not care who controlled each of the noble houses, as long as they were sworn to her. Since Elise had killed the thrall Berholdt, she would have to prove her own value, or a more suitable replacement would be found.

Seeing a path to greater power, Elise took to the cabal like few before her. She met often with the most prominent members, trading influence and thwarting her rivals in a complex web of tangled schemes. With the wealth of two houses, there were not many who could oppose her, and she became even more adept at persuading others to do her bidding.

Eventually, she learned of an object that held great significance for the Black Rose—the skull of an ancient warlord known as Sahn-Uzal, rumored to have been hidden long ago in the Shadow Isles. Keen to gain the Pale Woman’s favor, Elise found a desperate, debt-ridden captain willing to bear her and a handful of devotees to the cursed city of Helia. They came ashore on a beach of ashen sand, and were tormented by spiteful wraiths as they searched in vain for the lost vault.

But Elise found something she had not anticipated.

A creature of the long-forgotten past had made its home in the lightless depths beneath the city. This bloated, chitinous monster was the spider-god Vilemaw, and it erupted from the darkness to devour the intruders, before sinking its fangs into Elise’s shoulder. She fell, howling and convulsing as the venom wrought terrible changes upon her body. Her spine rippled with undulant motion, and arachnoid legs pushed out from her flesh.

Finally, breathless with the agony of transformation, Elise turned to find her new master looming above her. An unspoken understanding passed between them in that moment, and she scuttled back to the beach, untroubled by the Isles’ spirits as she weaved in and out of the twisted treeline.

Some weeks later, when her ship arrived back at the Noxian capital in the dead of night, Elise had regained her human form… though she was the only living thing left aboard.

Though no evidence was ever found of the warlord’s skull, the Pale Woman saw Elise’s dangerous new gift for what it was—a means to come and go safely between Noxus and the Shadow Isles. An accord was struck, wherein the Black Rose would provide Elise with endless unwitting sacrifices to offer up to the spider-god, and in return she would recover any artifacts of power she could from those benighted, forbidding shores.

Elise once again took up residence in the neglected halls of House Zaavan, carefully cultivating a reputation as a seductive yet unreachable recluse. Few have ever guessed her true nature, yet fanciful rumors abound—wild tales of her ageless beauty, and a terrifying, voracious creature said to lair in the bowels of her dilapidated, dust-wreathed palace.

Though centuries have passed, whenever Elise feels the summons of her god, she returns to the land of the Black Mist with a hapless suitor in tow, or some other easily swayed soul.

And none who accompany her ever return.