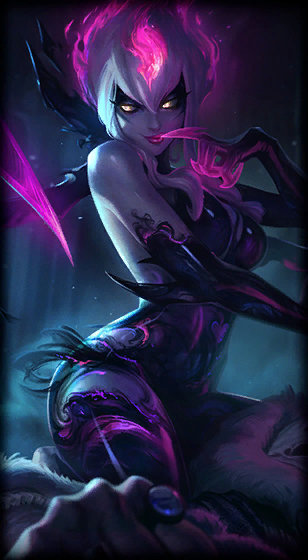 “What are you doing tonight? How about we get together and unlock that vast well of torment inside you?”
~ Evelynn
Champion Information
Region

Passive
Ability
Passive
Affects
Self
When out of combat, Evelynn enters Demon Shade. Demon Shade heals Evelynn when she is low on health and grants Camouflage after level 6.
Hate Spike

Q
Ability
Direction
Auto
Affects
Enemies
Damage Type
Magic
Evelynn strikes out with her Lasher, dealing damage to the first unit hit. Then, Evelynn can shoot a line of spikes at nearby foes up to 3 times.
4
40 / 45 / 50 / 55 / 60
Allure

E
Ability
Unit
Affects
Enemies and Self
Damage Type
Magic
Evelynn whips her target with her Lasher, dealing damage. She then gains movement speed for a short duration.
8
40 / 45 / 50 / 55 / 60
Last Caress

R
Ability
Direction
Affects
Enemies and Self
Damage Type
Magic
Evelynn briefly goes untargetable and decimates the area in front of her before warping backwards a long distance.
120 / 100 / 80
100

Within the dark seams of Runeterra, the demon Evelynn searches for her next victim. She lures in prey with the voluptuous façade of a human female, but once a person succumbs to her charms, Evelynn’s true form is unleashed. She then subjects her victim to unspeakable torment, gratifying herself with their pain. To the demon, these liaisons are innocent flings. To the rest of Runeterra, they are ghoulish tales of lust gone awry and horrific reminders of the cost of wanton desire.

Evelynn was not always a skilled huntress. She began eons ago, as something primordial, shapeless, and barely sentient. This nascent wisp of shadow existed, numb and unroused by any stimulation, for centuries. It might have remained so, had the world not been upended by conflict. The Rune Wars, as they would come to be known, brought an era of mass suffering the world had never known.

As people across Runeterra began to experience a vast array of pain, anguish, and loss, the shadow stirred. The nothingness it had known for so long had been replaced by the manic vibrations of an agonized world. The creature quivered with excitement.

As the Rune Wars escalated, the world’s torment grew so intense that the shadow felt as if it might burst. It drank in all of Runeterra’s pain, which it experienced as boundless pleasure. The sensation nourished the creature, and over time, it transformed into something more. It became a demon, a ravenous spiritual parasite that fed on the basest of human emotions.

When the wars finally ended, the world’s suffering waned, and the demon found itself growing desperate. The only pleasure it had ever known was born of other creatures’ misery. Without their pain, it felt nothing, just as it had in its earliest days.

If the world would not provide the suffering the demon needed to thrive, it would have to make its own. It needed to inflict pain on other beings so that it could experience that elation again.

At first, catching prey was a challenge for the demon. It could move undetected in its shadow form, but to touch a human, the creature needed to manifest as something tangible. It made several attempts to fashion a physical body from its shadow-flesh, but each result was more monstrous than the last, scaring off her prey.

The demon realized it needed a shape that was pleasing to humans, one that would not only lure them right into its claws, but would offer them ecstasy born of their own desires, so that their pain would be that much sweeter.

From the shadows, it began to study those it sought to prey upon. It tailored its flesh to their liking, learned to say what they wanted to hear, and to walk in a manner they found alluring.

In a matter of weeks, the demon had perfected her physique, leading dozens of enamored victims to be tortured to death at her hands. Though she relishes the exquisite pain of each of her victims, she always finds herself wanting more. Each human’s desires are so small, and they always expire too soon. Their pain, too fleeting to give her anything more than tiny morsels of pleasure, is just enough to tide her over to the next feeding.

She yearns for the day she can plunge the world into utter chaos, and she can return to an existence of pure, rapturous ecstasy.