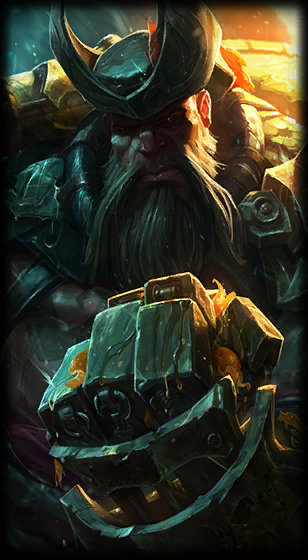 “I was cutting throats and sinking Noxian war galleys when you were still pissing your britches, boy. You don’t want to take me on.”
Champion Information
Region

E
Ability
Ground
Affects
Enemies
Damage Type
Physical
Gangplank uncovers a powder keg at target location. If he attacks it, it explodes, spreading the attack's damage to enemies in the area, slowing them.
18/17/16/15/14
Cannon Barrage

As unpredictable as he is brutal, the dethroned reaver king Gangplank is feared far and wide. Once, he ruled the port city of Bilgewater, and while his reign is over, there are those who believe this has only made him more dangerous. Gangplank would see Bilgewater bathed in blood once more before letting someone else take it—and now with pistol, cutlass, and barrels of gunpowder, he is determined to reclaim what he has lost.

Having grown rich preying upon the trade routes of the Twelve Seas, Gangplank has made himself many powerful enemies. In Ionia, he incurred the wrath of the deadly Order of Shadow after ransacking the Temple of the Jagged Knife, and it is said that the Grand General of Noxus himself has sworn to see Gangplank torn asunder after the pirate stole the Leviathan, Swain’s personal warship and the pride of the Noxian fleet.

While Gangplank has incurred the wrath of many, none have yet been able to bring him to justice, despite assassins, bounty hunters, and entire armadas being sent after him. He takes grim pleasure in the ever-increasing rewards posted for his head, and makes sure to nail them to the Bounty Board in Bilgewater for all to see whenever he returns to port, his ships heavy with loot.

In recent times, Gangplank has been brought down by the machinations of the bounty hunter Miss Fortune. His ship was destroyed with all of Bilgewater watching, killing his crew and shattering his aura of invincibility. Now that they have seen he is vulnerable, the gangs of Bilgewater have risen up, fighting amongst themselves to claim dominion over the port city.

Despite receiving horrific injuries in the explosion, Gangplank survived. Sporting a multitude of fresh scars, and with a newly crafted metal arm to replace his amputated limb, he is now determined to rebuild his strength, reclaim what he sees as rightfully his – and to ruthlessly punish all those who turned against him.