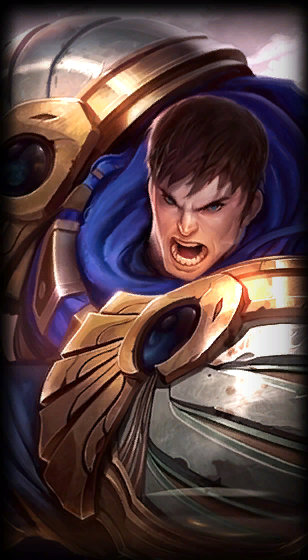 “This kingdom, and its people, have given me everything. What kind of man would I be if I gave any less in return?”
~ Garen
Champion Information
Region

Passive
Ability
Passive
Affects
Self
If Garen has not recently been struck by damage or enemy abilities, he regenerates a percentage of his total health each second.
Decisive Strike

Q
Ability
No Target
Affects
Self and Enemies
Damage Type
Physical
Garen gains a burst of Move Speed, breaking free of all slows affecting him. His next attack strikes a vital area of his foe, dealing bonus damage and silencing them.
8
Courage

W
Ability
No Target
Affects
Self
Garen passively increases his armor and magic resist by killing enemies. He may also activate this ability to give him a shield and tenacity for a brief moment followed by a lesser amount of damage reduction for a longer duration.
23 / 21 / 19 / 17 / 15
Judgment

R
Ability
Unit
Affects
Enemies
Damage Type
True
Garen calls upon the might of Demacia to attempt to execute an enemy champion.
120 / 100 / 80

A proud and noble soldier, Garen fights at the head of the Dauntless Vanguard. He is popular among his fellows, and respected well enough by his enemies—not least as a scion of the prestigious Crownguard family, entrusted with defending Demacia and its ideals. Clad in magic-resistant armor and bearing a mighty broadsword, Garen stands ready to confront mages and sorcerers on the field of battle, in a veritable whirlwind of righteous steel.

Born into the noble Crownguard family, along with his younger sister Lux, Garen knew from an early age that he would be expected to defend the throne of Demacia with his life. His father, Pieter, was a decorated military officer, while his aunt Tianna was Sword-Captain of the elite Dauntless Vanguard—and both were recognized and greatly respected by King Jarvan III. It was assumed that Garen would eventually come to serve the king’s son in the same manner.

The kingdom of Demacia had risen from the ashes of the Rune Wars, and the centuries afterward were plagued with further conflict and strife. One of Garen’s uncles, a ranger-knight in the Demacian military, told young Garen and Lux his tales of venturing outside the kingdom’s walls to protect its people from the dangers of the world beyond.

He warned them that, one day, something would undoubtedly end this time of relative peace—whether it be rogue mages, creatures of the abyss, or some other unimaginable horror yet to come.

As if to confirm those fears, their uncle was killed in the line of duty by a mage, before Garen turned eleven. Garen saw the pain this brought to his family, and the fear in his young sister’s eyes. He knew then, for certain, that magic was the first and greatest peril that Demacia faced, and he vowed never to let it within their walls. Only by following their founding ideals, and by displaying their unshakeable pride, could the kingdom be kept safe.

At the age of twelve, Garen left the Crownguard home in High Silvermere to join the military. As a squire, his days and nights were consumed by training and the study of war, honing his body and mind into a weapon as strong and true as Demacian steel. It was then that he first met young Jarvan IV—the prince who, as king, he would one day serve—among the other recruits, and the two became inseparable.

In the years that followed, Garen earned his place in the shieldwall as a warrior of Demacia, and quickly gained a fearsome reputation on the battlefield. By the time he was eighteen, he had served with honor in campaigns along the Freljordian borders, played a key role in purging fetid cultists from the Silent Forest, and fought alongside the valiant defenders of Whiterock.

King Jarvan III himself summoned Garen’s battalion back to the Great City of Demacia, honoring them before the royal court in the Hall of Valor. Tianna Crownguard, recently elevated to the role of High Marshal, singled out her nephew in particular, and recommended him for the trials necessary to join the ranks of the Dauntless Vanguard.

Garen returned home in preparation, and was greeted warmly by Lux and his parents, as well as the common people living on his family’s estate. Though he was pleased to see his sister growing into an intelligent, capable young woman, something about her had changed. He had noticed it whenever he visited, but now Garen wrestled with a real and gnawing suspicion that Lux possessed magical powers… though he never let himself entertain the idea for long. The thought of a Crownguard being capable of the same forbidden sorceries that had slain their uncle was too unbearable to confront.

Naturally, through courage and skill, Garen won his place among the Vanguard. With his proud family and his good friend the prince looking on, he took his oaths before the throne.

Lux and her mother spent much more time in the capital, in service to the king as well as the humble order of the Illuminators—yet Garen tried to keep his distance as much as possible. Though he loved his sister more than anything else in the world, some small part of him had a hard time getting close to her, and he tried not to think about what he would be forced to do if his suspicions were ever confirmed. Instead, he threw himself into his new duties, fighting and training twice as hard as he had before.

When the new Sword-Captain of the Dauntless Vanguard fell in battle, Garen found himself put forward for command by his fellow warriors, and the nomination was unopposed.

To this day, he stands resolute in the defense of his homeland, against all foes. Far more than Demacia's most formidable soldier, he is the very embodiment of all the greatest and most noble ideals upon which it was founded.