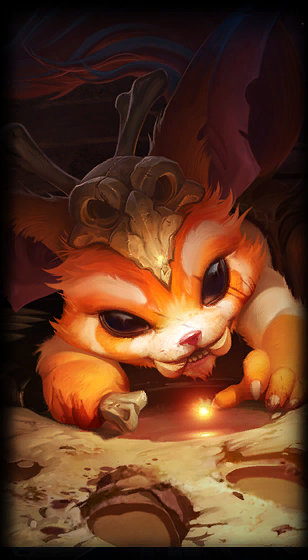 Passive
Ability
Passive
Affects
Self
While in combat Gnar generates Rage. At maximum Rage his next ability will transform him into Mega Gnar, granting increased survivability and access to new spells.
Boomerang Throw / Boulder Toss

Q
Ability
Direction
Affects
Enemies
Damage Type
Physical
Gnar throws a boomerang that damages and slows enemies it hits before returning to him. If he catches the boomerang its cooldown is reduced.

Mega Gnar is too enraged to be hyper and instead can rear up on his hind legs and smash down on the area in front of him, stunning enemies in an area.
7
Hop / Crunch

E
Ability
Ground
Affects
Enemies
Damage Type
Physical
Gnar leaps to a location and bounces off the head of any unit he lands on, traveling further.

R
Ability
Ground
Affects
Enemies
Damage Type
Physical
Mega Gnar throws everything around him in a chosen direction, dealing damage and slowing them. Any enemy that hits a wall is stunned and takes bonus damage.
90 / 60 / 30

Gnar is an excitable yordle whose playful antics can erupt into a toddler’s outrage in an instant, transforming him into a massive beast bent on destruction. Frozen in True Ice for millennia, the curious creature broke free and now hops about a changed world he sees as exotic and wondrous. Delighted by danger, Gnar flings whatever he can at his enemies, be it his bonetooth boomerang... or an uprooted tree.

Before the ice had given the Freljord its name, there existed a land brimming with wonder—that is, if one could see the world through the eyes of Gnar.

A young yordle with boundless energy, Gnar and others like him lived openly among the hardy tribes of the northlands. Though barely big enough to leave footprints in the snow, his temper rivaled that of beasts ten times his size, and he would erupt with a babble of curses the moment anything went amiss. For this reason, he felt more kinship with the greater and wiser creatures, who kept their distance from mortals. To Gnar, they looked like overgrown, white-furred yordles… and that was good enough for him.

While the tribes foraged across the tundra, gathering wild berries and tasty moss, Gnar collected more essential items, like rocks, pebbles, and the muddy remains of dead birds. His greatest treasure was the jawbone of a drüvask. When he tugged it from the cold earth, he squealed with glee and flung it as far as he could.

It landed two hops away.

Thrilled by this early success, Gnar carried his “boomerang” wherever he went. The world would try its best to offer him new delights—shiny lint, sweet nectar, round things—but none could match the pure joy he felt in throwing and catching his cherished weapon. He now considered himself a hunter, and trailed herds of wild beasts that paid him no mind.

But even he could sense change coming to the land. The sky seemed darker. The winds felt colder. The mortal tribes who had once foraged together, now appeared to hunt each other…

The big white yordles would know what to do. Gnar would go to them.

Using all of his hunting skill, he tracked them into the snow-capped peaks of a vast mountain range, much farther than he had ever wandered before. As he approached unseen, he also saw more mortals than he could count. This was exciting, but no one else seemed too happy about it.

Then the ground shook, and split apart. For the first time in Gnar’s life, it seemed as though everyone else was throwing tantrums. The mortals yelled. The big yordles roared.

But the monster’s arrival silenced them all.

Heaving itself up from the newly opened abyss, it bore huge horns, whipping tentacles, and a single eye, burning with strange light that made the fur on Gnar’s back crawl. While some mortals fled at the sight, he began to feel an odd pain in his chest—it was like the thought of losing his boomerang, or never being hugged again. This horrible thing wanted to hurt his new friends.

And this made him angry. In that moment, Gnar truly raged.

All he could see was the monster. In a flash, he was in the air, leaping toward it. In one paw, he grasped a snowball… or so he thought. In fact, it was a boulder plucked from the mountainside, for Gnar had grown as large as the big white yordles. He would send this monster back where it came from, by walloping its face!

But the blow never landed. Gnar felt a chill colder than any winter, one that seemed to turn the air itself into ice—truly, this elemental magic froze him in place, biting through his shaggy fur. Everything, including the monster, became quiet. The yordle’s strength and anger melted away. A deep tiredness crept into his limbs, and he fell softly asleep.

Gnar napped for a long time. When he finally awoke, he shook the frost from his shoulders, breathing heavily. Everyone else was gone. With no monsters to fight and no friends to protect, he felt very small and alone again.

The land was very different, too. There was snow everywhere, blanketing everything as far as his wide eyes could see. Still, he let out a happy yelp when he saw his beloved boomerang lying beside him, and scurried away to find something to hunt.

Even now, Gnar has no grasp of what took place that fateful day, nor how he escaped. He simply marvels at the world before him, with so many oddities to collect and places to explore.