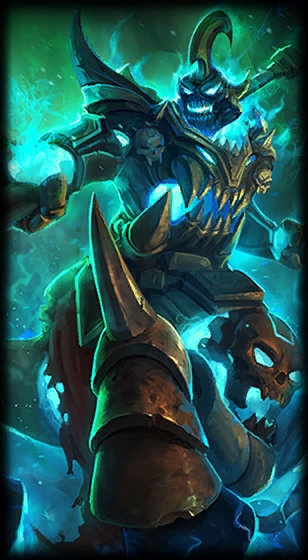 "Break their ranks and ride them down without mercy. Crush the living and feast on their terror."
Champion Information
Primary Role

Hecarim is an armored colossus who charges from the Shadow Isles at the head of a deathly host of spectral horsemen to hunt the living. A monstrous fusion of man and beast, cursed to ride for eternity, Hecarim revels in slaughter and crushing souls beneath his armored hooves.

Born into an empire long since gone to dust and forgotten, Hecarim was squired to a legendary company of knights known as the Iron Order, a brotherhood sworn to defend their king’s land. There he endured the harshest training imaginable, a punishing regime that schooled him to be a formidable warrior.

As Hecarim grew to manhood, he mastered every form of combat and war-stratagem with ease. He quickly outstripped his fellow squires in mounted warfare, and the Knight Commander of the Iron Order saw greatness within the young man and recognized a potential successor. But as the years passed and Hecarim won victory after victory from the back of his mighty warhorse, the Knight Commander finally recognized a growing darkness within his lieutenant. Hecarim’s thirst for wholesale slaughter and obsessive hunger for glory was eroding his honor and the Knight Commander knew the young knight must never become the master of the Iron Order. In his private chambers, he told Hecarim that he would not be his successor and though his lieutenant was furious, he bit back on his anger and returned to his duties.

When the Order next rode to war, the Knight Commander found himself surrounded by enemies and isolated from his fellow knights. Only Hecarim could ride to his aid, but in a moment of rancor, he turned his mount away and left the Knight Commander to die. At battle’s end, the surviving knights, oblivious to what Hecarim had done, knelt on the bloody ground and swore to follow him as their master.

Hecarim rode to the capital, and met with Kalista, the king’s general. Kalista recognized his exceptional nature, and when the king’s wife was wounded by the poisoned blade of an assassin, she tasked the Iron Order with staying at the king’s side while she sought a cure. Hecarim accepted, but being given what he perceived to be a menial task planted a seed of resentment.

Hecarim remained with the king as he descended into grief-induced madness. Gripped by paranoia, the king raged at those who sought to separate him from his dying wife and despatched the Iron Order to quell what he saw as dissent throughout his kingdom. Hecarim led the Iron Order in bloody suppressions of discontent, earning a dreadful reputation as a ruthless enforcer of the king’s will. Villages burned and the riders of the Iron Order put hundreds to the sword. The kingdom was in darkness, and when the queen died, Hecarim spun falsehoods around the king, speaking of how he had uncovered the truth behind her death, seeking sanction to lead the Iron Order to foreign lands and earn yet more dark renown.

Before he rode out, Kalista returned from her quest. She had found a cure for the queen’s malady upon the legendary Blessed Isles, but was too late to save her. Horrified at what had become of the kingdom, Kalista refused to share what she had discovered and was imprisoned for her defiance. Hecarim saw an opportunity to win yet more favor and visited Kalista’s cell. Promising to keep the king from any rash actions, Hecarim persuaded Kalista to reveal what she knew. Kalista reluctantly agreed and guided the king’s fleet through the glamours veiling the Blessed Isles from sight.

Hecarim led the ruined form of the king to the center of the magical island, where he met with its guardians and demanded their aid. The guardians offered their sympathies, but told the king his wife was beyond their help. Enraged, the king ordered Kalista to kill the guardians one by one until they relented. Kalista refused and stood between the king and the island’s inhabitants.

Hecarim recognized a crossroads in his life and made a decision that would damn him for eternity. Instead of supporting Kalista, he drove a spear through her back and commanded the Iron Order to slay the inhabitants of the Blessed Isles. Hecarim and his warriors slaughtered the guardians until a lantern-bearing wretch finally led the king to what he sought - the secret to resurrecting his wife.

But when the queen returned to life she was a horror of decayed meat and maggot-ridden flesh who begged to be allowed to die once more. Repulsed at what he had done to his beloved wife, the king enacted a spell to end their lives and bind them together for all eternity. His conjuration was successful, but unwittingly empowered by the many potent magical artifacts stored on the island, its power was increased a hundredfold.

A hurricane of black mist surrounded the king, spreading across the island and killing everything it touched. Hecarim abandoned the king to his doom and led the Iron Order back to their ships, killing all in their path as the spirits of those slain by the black mist arose as undying wraiths. One-by-one, the knights were dragged down into undeath until only Hecarim remained. As uncontrolled sorcery filled him, he and his mighty steed were fused together in a monstrous abomination that reflected the true darkness of his soul.

Howling in rage, the titanic beast known as the Shadow of War was wrought in an agonizing transformation, a brazen monster of fury and spite. The sins of his former life were heightened by the maelstrom of dark magic, birthing a creature of endless malice and terrifying power.

Now Hecarim is bound to the Shadow Isles, patrolling its nightmare shores and killing all before him in a mockery of his former duty. And when the Black Mist reaches beyond the Shadow Isles, he and the spectral host of the Iron Order ride with him to slaughter the living in the memory of glories long passed.