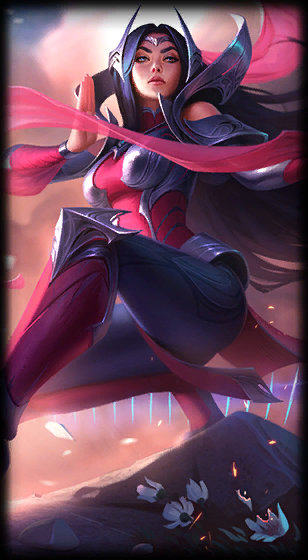 “There was a time when I danced only for myself. Now, I dance for the First Lands.”
~ Irelia
Champion Information
Region

Q
Ability
Unit
Affects
Enemies and Self
Damage Type
Physical
Irelia dashes forward to strike her target, healing herself. If the target is Marked or dies to Bladesurge, its cooldown refreshes.
11 / 10 / 9 / 8 / 7
20
Defiant Dance

E
Ability
Ground
Affects
Enemies
Damage Type
Magic
Irelia sends out two blades which converge on each other. Enemies caught in between are damaged, stunned and Marked.
18 / 16.5 / 15 / 13.5 / 12
50
Vanguard's Edge

R
Ability
Direction
Affects
Enemies
Damage Type
Magic
Irelia fires a massive number of blades that explode outward upon hitting an enemy champion. Enemies hit by the blades are damaged and Marked. Afterwards the blades form a wall that will damage and slow enemies that walk through it.
140 / 120 / 100
100

The Noxian occupation of Ionia produced many heroes, none more unlikely than young Irelia of Navori. Trained in the ancient dances of her province, she adapted her art for war, using the graceful and carefully practised movements to levitate a host of deadly blades. After proving herself as a fighter, she was thrust into the role of resistance leader and figurehead, and to this day remains dedicated to the preservation of her homeland.

Even as a small child, Xan Irelia was fascinated by the grace and beauty of human movement. Under her grandmother’s tutelage, she learned the traditional silk dances of her province—though she was dubious of their supposedly mystical connection to the Spirit of Ionia, Irelia’s love for the dances was real. Seeking to master the art, she eventually left home to study with some of Ionia’s most respected performers at the Placidium of Navori.

Irelia’s people were peaceful and sought harmony with their neighbors, but rumors of foreign invaders sighted off the coast unsettled many at the Placidium. Irelia returned to her village to find it already occupied, with steel-helmed soldiers from distant Noxus shoving unarmed civilians through the streets with the butts of their spears. The Noxian Admiral Duqal had seized the Xan home to quarter his fleet officers.

Irelia’s brothers and her father Lito had evidently protested; her entire family now lay in unmarked graves, in the gardens.

Ravaged by grief, the young girl saw Duqal’s men hauling valuables from the house. Among the loot was a large metal crest, depicting the Xan family emblem. Irelia raced to it, wrenching it from Noxian hands. The admiral himself hurled her to the ground, and had his warriors shatter the crest with a heavy iron maul, before ordering them to dig a fresh grave for this upstart child.

As they surrounded her, Irelia averted her eyes, looking to the pieces of the Xan crest scattered on the ground. From deep within her soul, she felt a strange rhythm begin to beat. The shards of metal began to twitch, to twist, moving seemingly on their own, and Irelia felt the serene joy of the ancient dances once more...

With a sweep of her arm, she sent the pieces flying like ragged blades, cutting clean through two of the Noxians. As Duqal and his officers reeled in shock, Irelia snatched up the shards of her crest, and fled the village.

In the quiet forests beyond, Irelia mourned her family, and thought back to her grandmother’s teachings. She realized that the techniques she had learned were more than mere dances—they were a powerful expression of something far greater.

The Noxian occupation soon began to test the fragile peace of the First Lands. It was said that even the religious leader Karma had been forced to strike back at the invaders with deadly magic, though her followers had now withdrawn to the Lasting Altar and would not condone any further violence. Across Navori, dissenting voices began to band together. A resistance was forming, one that would not rest until Ionia was free once more. Irelia joined their ranks, performing her cherished dances for them in the woodland camps, to preserve some vestige of their vanishing culture.

She was barely fourteen years old when she found herself back at the Placidium. Her band of resistance fighters joined the militia who had sworn to guard the monasteries and wild, sacred gardens.

But Noxus knew only too well what this place represented. A particularly cunning general named Jericho Swain captured the Placidium and took its defenders hostage, hoping to lure the inevitable reinforcements into a trap.

It was in this moment that Irelia rose to meet her destiny. Freed from her bonds, she unleashed the full potential of her ancient blade dance, lashing out with graceful zeal. A dozen of Swain’s veterans fell, sowing chaos in their ranks as the other captives joined her, before she struck down the general himself—the sight of this rebellious girl hefting his severed arm over her head would be the turning point of the war.

This victory, the Great Stand at Navori, ensured that everyone in Ionia knew the name of Xan Irelia, and looked to her for leadership. Reluctantly, she led the growing resistance for almost three years of grueling battle before her triumph at Dalu Bay. There, she finally cornered the defeated Admiral Duqal, and exacted the vengeance she had sought for so long.

Though the war has long since ended, Ionia has been permanently changed by it. The First Lands are now divided, with rival factions fighting each other almost as bitterly as they did the Noxians. Many continue to look to Irelia for answers but, while others might welcome such power, Irelia remains uneasy with it.

At heart, she still yearns only to dance alone.