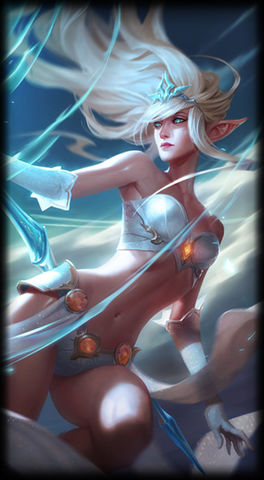 “Do not fear the winds of change—they will always be at your back.”
Champion Information
Region

Q
Ability
Direction
Affects
Enemies
Damage Type
Magic
By creating a localized change in pressure and temperate, Janna is able to create a small storm that grows in size with time. She can activate the spell again to release the storm. On release this storm will fly towards the direction it was cast in, dealing damage and knocking away any enemies in its path.
12
60/80/100/120/140
Zephyr

W
Ability
Unit
Affects
Enemies
Damage Type
Magic
Janna summons an air elemental that passively increases her Move Speed and enables her to pass through units. She may also activate this ability to deal damage and slow an enemy's Move Speed. The passive is lost while this ability is on cooldown.
8/7.5/7/6.5/6
50/60/70/80/90
Eye of the Storm

R
Ability
No Target
Affects
Enemies and Allies
Janna surrounds herself in a magical storm, throwing enemies back. After the storm has settled, soothing wind heal nearby allies while the ability is active.
150/135/120
100

An ancient and mysterious wind spirit, Janna has come to protect the dispossessed of Zaun. While her presence is most often felt as a soothing breeze or a ferocious tempest, she also can manifest in corporeal form as an ethereal figure, comforting the downtrodden. Over the eons, Janna has witnessed the rise and fall of civilizations. Through it all, she remains steadfast as a beacon of hope to those in need.

Since ancient times, there have been those who prayed to the winds. From sailors seeking good weather to the downtrodden calling on winds of change, mortals have placed their hope in the tempests and gales that sweep across Runeterra.

Surprisingly, the wind sometimes would seem to answer. Seafarers might spot a bright blue bird just before a healthy tailwind billowed their sails. Others could swear they’d heard a whistling in the air right before a storm, as if to warn them of its approach. As word of these omens spread, sightings of the bird grew more common. Some even swore they had seen the bird transform into a woman. With tapered ears and flowing hair, this mysterious maiden was said to float above the water and direct the wind with a flick of her staff.

The faithful called this wind spirit Jan’ahrem, an ancient Shuriman word meaning “guardian,” for she always seemed to appear in moments of great need. As time went on, she came to be known more simply as Janna.

Her name spread across the Shuriman continent’s coasts, and the seafaring people of Oshra Va’Zaun were her most fervent believers. They depended on calm seas for the trade ships that traveled through their city’s port. Statues and shrines were raised in gratitude for Janna’s benevolence. After the Shuriman empire enveloped the city, these displays of devotion continued… for a time.

When the emperor issued decrees suppressing “false idols,” Janna’s statues were torn down. Yet despite the growing worship of the Ascended god-warriors, many still offered quiet prayers to Janna, for what could god-warriors do to protect ships from storms? These mortals often wore amulets with the image of a bluebird—smaller, more personal tokens in Janna’s honor.

Through all of this, Janna continued to aid the vulnerable who called upon her. In a region rife with upheaval, she remained constant. Those with an eye toward history might appreciate the irony of “winds of change” being the only thing that did not.

After the great empire fell, once verdant lands became a desert as the remaining Ascended brought war and chaos—yet Janna shielded the city, now known as Zaun, from the turmoil.

Over the centuries, Janna watched as Zaun’s ambitions grew. While the city was still a robust trade port, its denizens aspired for more. They dreamed of cutting a canal through the isthmus on which they lived, opening a path that would unite the seas surrounding Valoran and Shurima. The city poured great effort, wealth, and time into the construction. Prayers to Janna waned as mortal dreams focused on mortal machinations.

However, the canal’s excavation made great portions of Zaun unstable. On one cataclysmic day, entire districts on the River Pilt collapsed below the western sea level, and thousands suddenly found themselves fighting for their lives against the clashing currents.

As these unfortunate souls faced their doom, they prayed for salvation. They called out the name of their ancient protector:

Though these mortals had seemingly forgotten her until now, Janna did not hesitate to help them. An immense gale swept over the city as she took corporeal form. Impossible walls of air held flooding waters at bay as people fled the drowned ruins of their homes. Ferocious gusts of wind cut through the suffocating smoke from fires caused by the destruction. Yet while she saved many, thousands still perished that day—but all who survived witnessed Janna’s benevolence. Never again would the city’s people forget their savior.

To this day, through the rise of Piltover and the ongoing struggles of modern Zaun, Janna’s faithful wear bluebird medallions and show reverence to the winds. And through it all, Janna stands steadfast by the humble and the meek. Zaunites all know that whether they fight for breath amid the toxic clouds of the Zaun Gray, stand against the brutality of violent chem-barons, or fend off other threats, Janna will not abandon them.