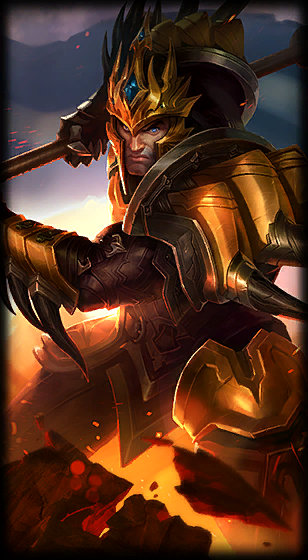 Q
Ability
Direction
Affects
Enemies
Damage Type
Physical
Jarvan IV extends his lance, dealing physical damage and lowering the Armor of enemies in its path. Additionally, this will pull Jarvan to his Demacian Standard, knocking up enemies in his path.
10 / 9 / 8 / 7 / 6
45 / 50 / 55 / 60 / 65
Golden Aegis

W
Ability
No Target
Affects
Self and Enemies
Jarvan IV calls upon the ancient kings of Demacia to shield him from harm and slow surrounding enemies.
9
30
Demacian Standard

R
Ability
Unit
Affects
Enemies
Damage Type
Physical
Jarvan IV heroically leaps into battle at a target with such force that he terraforms the surrounding area to create an arena around them. Nearby enemies are damaged at the moment of impact.
120 / 105 / 90
100

As the king’s only son, Prince Jarvan is heir apparent to the throne of Demacia. Raised to be a paragon of his nation’s greatest virtues, he is forced to balance the heavy expectations placed upon him with his own desire to prove himself on the battlefield. An exceptional warrior in his own right, Jarvan also inspires his troops with fearsome courage and selfless determination, raising his family’s colors high and revealing his true strength as a future leader of his people.

Soon after King Jarvan III’s coronation, he addressed the people of Demacia. Even though there were still many foes beyond the borders of their proud kingdom, several of the noble families had begun to feud with one another, some even raising private militias to seek the favor of their new king.

This would not stand. Jarvan would not allow such dangerous rivalries to develop, and declared his intention to end the feuding by marriage. His bride, the Lady Catherine, was much beloved by the people—and courtly gossip had long held that the two shared some secret fondness for one another. The bells of the Great City rang for a day and a night in celebration, and by year’s end came the announcement that the royal couple were expecting their first son.

But all joy was forgotten when Catherine died in childbirth.

The infant, named for his father’s line, was declared heir apparent to the throne of Demacia. Torn between grief and elation, Jarvan III swore never to take another wife, and that all his hopes and dreams for the kingdom’s future would live on in his son.

With no memory of his mother, the young prince Jarvan was raised at court, groomed and guarded every moment of his life. The king insisted that he receive the finest Demacian education, learning from an early age the moral value of charity, the solemn burden of duty, and the honor of a life spent in service to one’s people. As he grew, he was also introduced to the history and politics of Valoran by his father’s seneschal, Xin Zhao. Hailing from distant Ionia, this loyal protector taught the prince about the world’s more spiritual philosophies, as well as the myriad arts of war.

During his military training, Prince Jarvan found himself facing a brash youth of the Crownguard family named Garen. The two were of similar age, and became a quick pair—Jarvan admired Garen’s sheer determination and fortitude, and Garen looked up to the prince’s tactical instincts.

When Jarvan came of age, his father rewarded him with the honorary rank of general. While it was not necessarily expected that the heir to the throne would take to the field of battle, Jarvan was determined to prove himself, with or without the king’s blessing. The lands beyond the Argent Mountains had long been contested by the empire of Noxus, creating an almost lawless frontier where foreign reavers and warring tribes threatened many of Demacia’s allies. The prince pledged to bring stability back to the region. His great grandfather had been slain by a foul Noxian brute many years ago, in the first clashes between their nations in the south. Now, that insult would finally be answered.

Jarvan’s armies won victory after victory… but the carnage he witnessed in the outlying towns troubled him deeply. When word came that the Gates of Mourning had fallen, he resolved to drive onward into Noxian territory, against the advice of his lieutenants.

Inevitably, with the battalions spread so thin, Jarvan was encircled and defeated by Noxian warbands before he even reached Trevale.

Refusing to surrender, the prince and a handful of other survivors fled into the forests, only to be hounded for days by enemy scouts. Eventually, pierced through his side by an arrow, Jarvan collapsed into the shade of a fallen tree, where he drifted in and out of consciousness. He was devastated. He had failed his family, his kingdom, and his brothers-in-arms.

Doubtless he would have died there, alone, were it not for Shyvana.

This strange, violet-skinned woman somehow carried Jarvan all the way back to Demacia, to the old castle at Wrenwall, where she proved herself a kind and worthy companion during his days of healing. At first taken aback by her outlandish appearance, the garrison commander could not deny that she had done a great service to the throne in saving Jarvan’s life.

Unfortunately, Shyvana was herself being pursued—by the monstrous elemental dragon Yvva. When the castle’s watchmen spotted the beast on the horizon, Jarvan saw a chance to redeem himself. As Shyvana prepared to meet the beast in the skies in her half-dragon form, the prince limped from his bed to marshal the garrison, and reinforce the walls. He took up his lance, and swore that they would return to the Great City with the head of Yvva, or not at all.

The battle was swift and deadly. When his men were driven in fear from their posts, it was Jarvan who rallied them. When they were wounded, it was Jarvan who directed healers to their aid. The fell creature was slain by Shyvana, but it was the prince’s leadership that had held the line. In that moment, Jarvan saw the true strength of the Demacian people—standing together as one in defense of their homeland, no matter their differences or misgivings. He promised Shyvana that she would always have a place among his guard, if she so chose.

With the dragon’s skull in tow, Jarvan journeyed to his father’s court in triumph, Shyvana at his side. Though the king was overcome with emotion at his son’s return, some of the gathered nobles quietly questioned the wisdom of allowing such a creature to stand with the prince… let alone serve as one of his protectors.

Even so, Jarvan resumed his position within the military, also playing a key role in stately matters beyond the defense of the realm. With his friend Garen now Sword-Captain of the elite Dauntless Vanguard, and Shyvana and the Wrenwall veterans training other border garrisons, the prince felt assured that Demacia could answer any emergent threat.

But the kingdom itself was changing.

The Mageseeker order had gained support among the noble families, leading to widespread imprisonment of anyone in Demacia possessing magical talents. Fear of persecution quickly gave way to resentment, and finally rebellion. When mages attacked the Great City, Jarvan was distraught to discover that his father, the king, had been killed.

Although the prince’s political stance toward mages has hardened significantly since then, he has yet to fully allay concerns over his suitability to rule. As such, he has taken the counsel of many prominent nobles—including Garen’s aunt, High Marshal Tianna Crownguard—and pledged to heed their wisdom and experience in the days ahead.

For he must examine his own conscience and allegiances carefully if he is ever to come into his inheritance, and be crowned King Jarvan IV of Demacia.