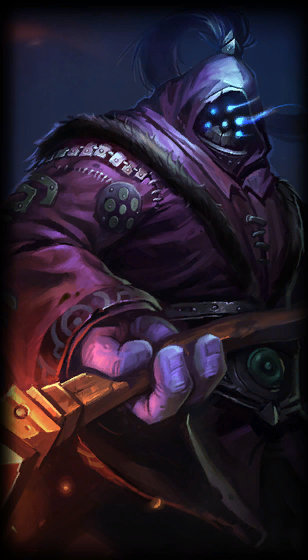 “Strength and will are what make a weapon.”
~ Jax
Champion Information
Region

Runeterra’s greatest weapons master, Jax is the only survivor of the Kohari—champions sworn to the defense of Icathia. But when the Void was unleashed against the Shuriman empire’s Ascended Host, Icathia was destroyed, leaving Jax without a home or purpose. He gathered the “last light of Icathia”, a symbol of his hope to one day defeat the Void, and now travels the world, searching for warriors strong enough to face the coming darkness by his side.

Saijax Cail-Rynx Icath’un grew up in Icathia, a satrapy of the Shuriman empire. Ever since he was a boy, his father told him of when their home was a proud, independent nation, before it was ground under the heel of Shuriman oppression. He told him of the Kohari, heroes who protected Icathia and its Mage King. The Mage King had resisted Shurima’s conquest, but when he died in battle, his Kohari protectors followed him, committing ritual suicide. The Shuriman emperor displayed the Kohari’s decaying bodies for all to see, and the Mage King himself was impaled above the city gates, his bones left to molder.

Saijax’s father had witnessed this cruel act, and over time he passed down to his son the burning resentment that was growing in every Icathian heart. Even so, Saijax committed himself to the study of arms, learning from Shurima’s weapons masters as well as his own clan’s elders.

After many centuries of Shuriman rule, a massive earthquake struck the coastal province of Saabera. The destruction revealed something hidden deep beneath the earth, something dark and of great power—perhaps strong enough even to overcome Shurima’s god-like Ascended warriors. Saijax was entrusted with protecting the Icathian mages who encountered this discovery… which the guards just barely contained with brazier-staves that blazed with conjured elemental fire. Disturbed, he escorted the mages to the governing council so they could tell of what they’d learned.

They called this power the Void.

Immediately the council recognized its potential, but Saijax saw the doom the Void portended. As a master of weaponry, he knew the danger of using a weapon they could neither fully understand nor safely harness. He regretted that he didn’t kill the mages as they rode from Saabera. He would regret it even more in the days to come.

Confident that the Void could defeat their Shuriman overlords, the council crowned a new Mage King. The Kohari were rebuilt, with Saijax among the first to join their ranks. They triumphed in early engagements, and Saijax even killed one of the vaunted Ascended in battle, watching with pride as its corpse was paraded around the liberated city of Bai-Zhek.

When the Ascended Host approached Icathia, Saijax and his brethren assembled on the front lines. As the two armies churned the earth beneath them into crimson loam, Icathia’s mages and priests deemed the time had come to unleash the Void.

Ruin swept over the land, as Icathians, Shurimans, and even Ascended were unraveled from existence. The city’s walls collapsed as the Void swallowed thousands into cold, silent oblivion.

In moments, Icathia was lost.

Saijax rode to the ruined crater where the Void had been summoned, determined to fall upon his sword like the Kohari of old. But before he could take his life, he saw among the devastation a discarded brazier-stave that he recognized from Saabera—it still blazed with elemental fire that harmed the Void. This flame kindled a spark in Saijax’s heart. He took up the stave and left behind the ruins of his homeland, tending to this “last light of Icathia”, and the hope it represented.

Grieving and ashamed, Saijax Cail-Rynx Kohari Icath’un forsook his old name, and from that day was known only as Jax.

He became a wanderer, traveling across the known world and to places beyond any map. As he bore the elemental fire, Jax’s life extended beyond even the expectations of his long-lived people. Yet the farther he went from Icathia, the lower the flame burned, until it threatened to gutter out once and for all. Jax understood with grim resolution that he couldn’t run from his past. He had a duty to return, and fight. The advance of the Void had been halted by the last surviving Ascended, but its singular threat endured.

For centuries since, Jax has roamed, a vagabond warrior searching for those strong enough to rebuild the Kohari. Though he has fought countless times against beings of great skill, courage, and power, none have yet convinced him that they can march against the coming darkness. The fall of Icathia has plagued Jax with doubt, but one thing remains certain: when the final battle comes, Jax will stand against the Void.

Even if he has to face it alone.