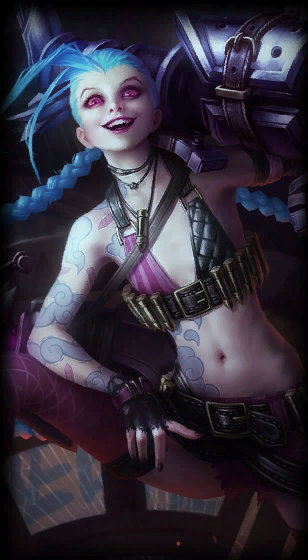 R
Ability
Direction
Affects
Enemies
Damage Type
Physical
Jinx fires a super rocket across the map that gains damage as it travels. The rocket will explode upon colliding with an enemy champion, dealing damage to it and surrounding enemies based on their missing Health.
75 / 65 / 55
100

A manic and impulsive criminal from Zaun, Jinx lives to wreak havoc without care for the consequences. With an arsenal of deadly weapons, she unleashes the loudest blasts and brightest explosions to leave a trail of mayhem and panic in her wake. Jinx despises boredom, and gleefully brings her own chaotic brand of pandemonium wherever she goes.

While most look at Jinx and see only a mad woman wielding an array of dangerous weapons, a few remember her as a relatively innocent girl from Zaun—a tinkerer with big ideas who never quite fit in. No one knows for certain what happened to turn that sweet young child into a wildcard, infamous for her wanton acts of destruction. But once Jinx exploded onto the scene in Piltover, her unique talent for sowing anarchy instantly became the stuff of legend.

Jinx first gained notoriety through her anonymous “pranks” on the citizens of Piltover… particularly those with connections to the wealthy merchant clans. These pranks ranged from the moderately annoying to the criminally dangerous. She blocked streets on Progress Day, with a stampede of exotic animals freed from Count Mei’s menagerie. She disrupted trade for weeks when she lined the city’s iconic bridges with adorably destructive flame chompers. Once, she even managed to move every street sign in town to new and utterly confusing locations.

Though this unknown troublemaker’s targets seemed random, and her motivation nothing more than pure chaos, her actions always served to bring the city’s orderly bustle to a screeching halt.

Naturally, the wardens attributed some of her crimes to chem-punk gangs from the undercity. Having others get credit for her manic schemes didn’t sit well with Jinx, and so she made sure to make her presence known at every future crime scene. Rumors soon circulated of the mysterious, blue-haired Zaunite girl carrying chemtech explosives, a shark-mouthed rocket launcher, and a repeater gun. Still, the authorities dismissed these reports as preposterous. After all, how could a lowly street punk possibly obtain such lethal ordnance?

Jinx’s bombastic spree seemed endless, with the wardens’ attempts to catch the culprit thwarted at every turn. She began tagging her works of destruction with vivid graffiti, and other taunting messages directed at the city sheriff’s newest ally in the fight against crime, Enforcer Vi.

Jinx’s reputation grew, leaving the people of Zaun divided as to whether she was a hero for sticking it to the arrogant Pilties, or a dangerous lunatic for escalating existing tensions between their two cities.

After months of ever-increasing carnage, Jinx unveiled her biggest plan yet. In her trademark electric pink, Jinx daubed the walls of the Ecliptic Vaults—one of Piltover’s most secure treasuries—with a very unflattering caricature of Enforcer Vi, and the details of her own intention to rob the stores within.

An uneasy sense of anticipation settled on Piltover and Zaun leading up to the promised date of the heist. Many doubted even Jinx would have the guts to show up and risk almost certain capture.

When the day arrived, Vi, Sheriff Caitlyn, and the wardens prepared a trap for Jinx outside the treasury. But Jinx had already smuggled herself inside by way of an oversized coin crate that had been delivered days before. When Vi heard pandemonium erupt from inside the structure, she knew the wardens had been outclassed once again. She burst into the treasury, and the ensuing confrontation left the Ecliptic Vaults a smoldering ruin, and the merry mischief maker Jinx nowhere to be found.

Jinx remains at large to this day, and is a constant thorn in Piltover’s side. Her schemes have inspired copycat crimes among the chem-punks, as well as numerous satirical plays lampooning the incompetence of the wardens, and even a smattering of new colloquialisms throughout both cities—though no one has yet had the courage to call Enforcer Vi “Pretty-in-Pink” to her face.

Jinx’s ultimate endgame, and her obvious obsession with Vi, both remain a mystery, but one thing is certain: her crimes are continuing and growing in sheer audacity.