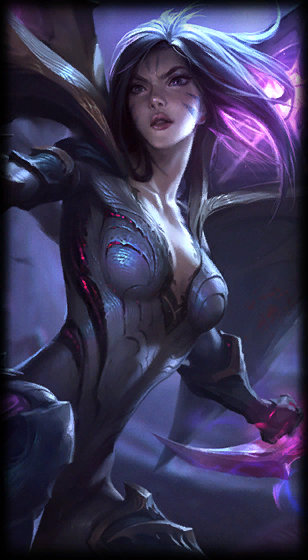 “My appearance may frighten you, but make no mistake—I am on your side, and we fight to the bitter end.”
~ Kai'Sa
Champion Information
Region

Q
Ability
No Target
Affects
Enemies
Damage Type
Physical
Kai'Sa shoots a swarm of missiles that seek out nearby targets.

Claimed by the Void when she was only a child, Kai’Sa managed to survive through sheer tenacity and strength of will. Her experiences have made her a deadly hunter and, to some, the harbinger of a future they would rather not live to see. Having entered into an uneasy symbiosis with a living Void carapace, the time will soon come when she must decide whether to forgive those mortals who would call her a monster, and defeat the coming darkness together… or simply to forget, as the Void consumes the world that left her behind.

Perhaps the most remarkable thing about the fearless hunter of the Void known as Kai’Sa is how unremarkably her life began. She did not descend from tribal warriors hardened by generations of battle, nor was she summoned from distant lands to fight the unknowable menace lurking beneath Shurima. Rather, she was just an ordinary girl, born to loving parents who called the unforgiving southern deserts their home. This was where she would spend her days playing with friends, and her nights dreaming about her place in the world.

In her tenth summer, the young girl Kaisa’s destiny would be changed forever. Had she been older, she might have noticed more of the unusual events that had begun to unfold in the villages—every day, her mother urged her stay home, for fear of strangers wandering the land, demanding tribute to dark powers below. Kaisa and her friends did not believe it, until one evening they came upon a pen of sacrificial goats bought from nomad herdsmen. Using the knife her father had given her on her eighth birthday, she cut their tethers and set the animals free into a nearby canyon. It seemed like a harmless prank, until the unthinkable happened. The ground began to quake, flashes of light scorched the sky, and the children ran for their lives.

The Void had been awakened. A great rift split the bedrock, swallowing up Kaisa’s village and everyone in it, leaving nothing behind but sand pierced with twisted columns as black as night.

Kaisa regained consciousness to find herself trapped underground. She was filled with crippling fear, but there was still hope; she could hear the faint cries of other survivors. They called out to each other feebly, repeating their names one by one like a mantra. Sadly, by the third day, hers was the only voice left. Her friends and family were all gone. She was alone in the darkness.

It was only when all seemed lost that she saw the light.

She followed it down.

Along the way, she found meager sustenance. Amid the debris left by the collapse were ragged waterskins, rotting peaches—anything to keep starvation at bay. But, eventually, Kaisa’s hunger was replaced by fear once again. She found herself in a vast cavern, illuminated by an otherworldly purplish glow, and she could see she was no longer alone.

Skittering creatures swarmed in the depths. The first that came for Kaisa was no bigger than her, and she clutched her knife in both hands, ready to defend herself. The voidling horror knocked her to the ground, but she drove the blade into its pulsing heart, and the two of them tumbled deeper into the abyss.

The creature was seemingly dead, but its unnatural skin had taken hold upon the flesh of her arm. The dark shell tingled, but was hard as steel to the touch. In a panic, Kaisa broke her knife trying to remove it. But when the larger beasts came, she used it as a shield to make her escape.

Soon enough, she realized the shell was becoming part of her. As her daily struggle to survive drew out into years, this second skin grew with her, and so too did her resolve.

Now she had more than hope, she had a plan. Fight hard. Stay alive. Find a way back.

She was transformed, from frightened girl to fearless survivor, from prey to predator. For almost a decade, she has lived between two worlds in an attempt to keep them apart—the Void hungers to consume not only the scattered villages of Shurima, but the whole of Runeterra. She will not allow that to happen.

Though she has slain countless Void-constructs, she understands that many of the people she protects would see her as a monster herself. Indeed, her name has begun to pass into legend, an echo of the ancient horrors of doomed Icathia.

No longer Kaisa… but Kai’Sa.