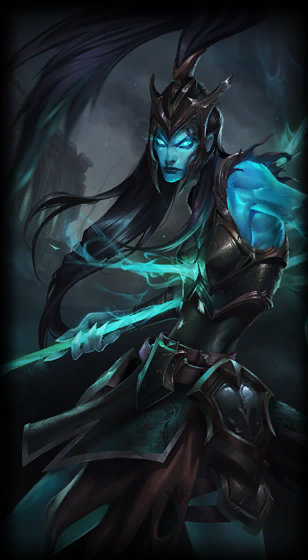 “Turncoats, oath breakers and betrayers… we hate them all.”
~ Kalista
Champion Information
Region

Passive
Ability
Passive
Affects
Self
Enter a movement command while winding up Kalista's basic attack or Pierce to lunge a short distance when she launches her attack.
Pierce

R
Ability
No Target
Affects
Allies
Kalista teleports the Oathsworn ally to herself. They gain the ability to dash toward a position, knocking enemy champions back.
150 / 120 / 90
100

An undying specter of wrath and retribution, Kalista is an armored nightmare summoned from the Shadow Isles to hunt deceivers and traitors. The betrayed may cry out in blood to be avenged, but Kalista only answers those willing to pay with their very souls. Those who become the focus of Kalista’s wrath should make their final peace, for any pact sealed with this grim hunter can only be ended by the cold, piercing fire of her soul-spears.

In life, Kalista was a proud general, niece to the king of an empire that none now recall. She lived by a strict code of honor, serving the throne with utmost loyalty. The king had many enemies, and when they sent an assassin to slay him, it was Kalista’s vigilance that averted disaster.

But in saving the king, she damned the one he loved most—the assassin’s deflected blade was envenomed, and sliced the arm of the queen. The greatest priests and surgeons were summoned, but none could draw the poison from her body. Wracked with grief, the king dispatched Kalista in search of a cure, with Hecarim of the Iron Order taking her place at his side.

Kalista traveled far, consulting learned scholars, hermits and mystics… but to no avail. Finally, she learned of a place protected from the outside world by shimmering pale mists, whose inhabitants were rumored to know the secrets of eternal life. She set sail on one last voyage of hope, to the almost legendary Blessed Isles.

The guardians of the capital city Helia saw the purity of Kalista’s intent, and parted the mists to allow her safe passage. She begged them to heal the queen, and after much consideration, the masters of the city agreed. Time was of the essence. While the queen yet breathed, there was hope for her in the fabled Waters of Life. Kalista was given a talisman that would allow her to return to Helia unaided, but was warned against sharing this knowledge with any other.

However, by the time Kalista reached the shores of her homeland, the queen was already dead.

The king had descended into madness, locking himself in his tower with the queen’s festering corpse. When he learned of Kalista’s return, he demanded to know what she had found. With a heavy heart, for she had never before failed him, she admitted that the cure she had found would be of no use. The king would not believe this, and condemned Kalista as a traitor to the crown.

It was Hecarim who persuaded her to lead them to the Blessed Isles, where her uncle could hear the truth of it from the masters themselves. Then, perhaps, he would find peace—even if only in accepting that the queen was gone, and allowing her to be laid to rest. Hesitantly, Kalista agreed.

And so the king set out with a flotilla of his fastest ships, and cried out in joy as the glittering city of Helia was revealed to him. However, they were met by the stern masters, who would not allow them to pass. Death, they insisted, was final. To cheat it would be to break the natural order of the world.

The king flew into a fevered rage, and commanded Kalista to slay any who opposed them. She refused, and called on Hecarim to stand with her… but instead he drove his spear through her armored back.

The Iron Order joined him in this treachery, piercing Kalista’s body a dozen times more as she fell. A brutal melee erupted, with those devoted to Kalista fighting desperately against Hecarim’s knights, but their numbers were too few. As Kalista’s life faded, and she watched her warriors die, swearing vengeance with her final breath…

When next Kalista opened her eyes, they were filled with the dark power of unnatural magic. She had no idea what had transpired, but the city of Helia had been transformed into a twisted mockery of its former beauty—indeed, the entirety of the Blessed Isles was now a place of shadow and darkness, filled with howling spirits trapped for all eternity in the nightmare of undeath.

Though she tried to cling to those fragmented memories of Hecarim’s monstrous betrayal, they have slowly faded in all the centuries since, and all that now remains is a thirst for revenge burning in Kalista’s ruined chest. She has become a specter, a figure of macabre folklore, often invoked by those who have suffered similar treacheries.

These wretched spirits are subsumed into hers, to pay the ultimate price—becoming one with the Spear of Vengeance.