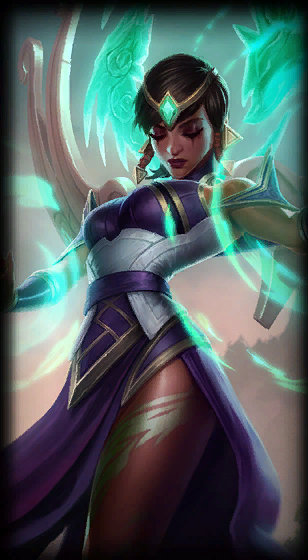 “As Ionia changes, so must I.”
~ Karma
Champion Information
Region

Mantra Bonus: In addition to the explosion, Mantra increases the destructive power of her Inner Flame, creating a cataclysm which deals damage after a short delay.
9 / 8 / 7 / 6 / 5
45
Focused Resolve

W
Ability
Unit
Affects
Enemies
Damage Type
Magic
Karma creates a tether between herself and a targeted enemy, dealing damage and revealing them. If the tether is not broken, the enemy will be rooted and damaged again.

R
Ability
No Target
Affects
Self
Damage Type
Magic
Karma empowers her next ability to do an additional effect. Mantra is available at level 1 and does not require a skill point.
40 / 38 / 36 / 34

No mortal exemplifies the spiritual traditions of Ionia more than Karma. She is the living embodiment of an ancient soul reincarnated countless times, carrying all her accumulated memories into each new life, and blessed with power that few can comprehend. She has done her best to guide her people in recent times of crisis, though she knows that peace and harmony may come only at a considerable cost—both to her, and to the land she holds most dear.

Karma is the living embodiment of an ancient Ionian soul, who serves as a spiritual beacon to each generation of her people. Her most recent incarnation came in the form of a 12-year-old girl named Darha. Raised in the northern highlands of Shon-Xan, she was headstrong and independent, always dreaming of a life beyond her provincial village.

But Darha began to suffer strange, fitful visions. The images were curious—they felt like memories, yet the girl was certain they had not happened to her. At first, the problem was easy enough to conceal, but the visions grew in intensity until Darha was convinced she was descending into madness.

Just when it seemed she would be confined to the healing huts forever, a group of monks visited her village. They had come from a place known as the Lasting Altar, where the divine leader Karma had passed away some months earlier. The monks were in search of the old man’s next incarnation, believing him to be among the villagers. They applied a series of tests to everyone they met, but eventually prepared to leave empty handed.

As they passed the healing huts, Darha threw herself out of her cot and ran to stop them. She wept, telling them of her visions, and that she had known the monks’ voices from the babble in her head.

They recognized the signs immediately. This was their Karma. The visions were past lives rushing to fill a new vessel.

In that moment, Darha’s life changed forever. She bid farewell to all she’d ever known, and journeyed to the Lasting Altar to learn from the monks. Over the years, they taught her to connect with her ancient soul, and to commune with thousands of previous incarnations, each espousing the wisdom of ages past. Karma had always advocated peace and harmony, teaching that any act of evil would bring about its own repercussions, and so required no response.

But Darha questioned these principles, even as she became Karma. Some of her followers were confused. How could she be invested with the Spirit of Ionia, the First Lands’ most sacred manifestation, and yet disagree with their most self-evident philosophies?

Indeed, these beliefs were truly tested when Noxus invaded Ionia. Many thousands were killed as the enemy warbands advanced inland, and Karma was forced to face the harsh realities of war. She could feel the immense destructive potential that swelled in her soul, and wondered what the point of this power could be, if it was not to be used.

The voices of the past urged her to remain at the Lasting Altar, to comfort her people and allow this conflict to pass. And yet, a far deeper truth compelled her to act...

Karma agonized over this, until she could stand it no longer. She confronted a Noxian commander on the deck of his own war frigate, and unleashed her divine fury. This was no single, measured attack—she obliterated the entire vessel and its crew in a heartbeat.

Though many Ionians rejoiced at this apparent victory, the monks believed she had made a huge mistake. She had upset the spiritual harmony of their homeland, disgracing all who had borne the name of Karma before her, and tarnished her own undying soul along with those of her followers. Even if it meant a life of solitary meditation and penance, they implored her to do no further injury.

Karma silenced them with a raised hand. Though she could still hear the voices in her head, it was the Spirit of Ionia in her heart that guided her… and the First Lands were stirring to defend themselves. She did not know if she had been chosen for her courage and strength of will, but Karma knew that sometimes harmony came only at a great cost. Their world was changing, and true wisdom lay not in resisting that fact, but accepting it.

Though the war with Noxus is now long over, there are still many in Ionia who have become only too glad to meet violence with violence, even against their own neighbors. Karma has pledged to guide as many of them as she can to a more enlightened path—to peace when possible, to action when necessary.