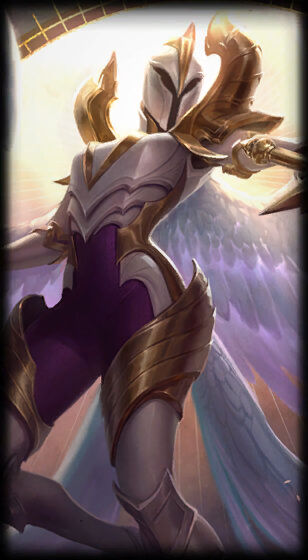 In a world far away, where an ancient war still rages, Kayle was a great hero – the strongest of an immortal race committed to destroying evil wherever it could be found. For ten thousand years, Kayle fought tirelessly for her people, wielding her flaming sword forged before time itself. She shielded her delicate features beneath her enchanted armor, the sole remaining masterpiece of an extinct race of craftsmen. Though a beautiful, striking creature, Kayle, now as then, avoids showing her face; war has taken a terrible toll upon her spirit. In her quest for victory, she sometimes would try to lift the wicked up from their morass of evil, but more than often she instead purged those she herself deemed beyond redemption. To Kayle, justice can so often be an ugly thing.

Ten years ago, Kayle's war against evil was nearly won... until her rebellious sister Morgana, a pariah amongst their people, suddenly gained power which threatened to bring Kayle and her people to their knees. To save her world, Kayle had no choice but to turn her fiery blade toward her own sister, disowning her, and drawing the line forever between them.