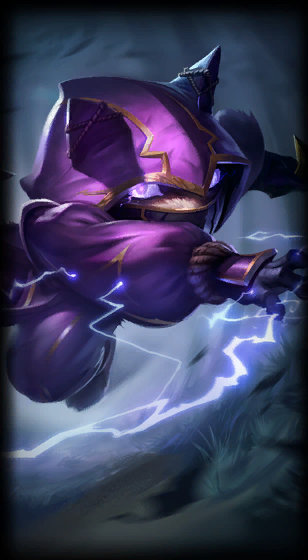 “I exist across realms, in the space between lightning’s strike and thunder’s call, the true balance within the storm.”
~ Kennen
Champion Information
Region

Mark of the Storm

E
Ability
No Target
Affects
Self and Enemies
Damage Type
Magic
Kennen morphs into a lightning form, enabling him to pass through units and apply a Mark of the Storm. Kennen gains movement speed when entering this form, and attack speed when leaving it.
10 / 9 / 8 / 7 / 6
100 / 95 / 90 / 85 / 80
Slicing Maelstrom

The longest-standing member of the ancient Kinkou Order, the yordle Kennen is the first and only Heart of the Tempest. For centuries, he has used diplomacy—and force—to maintain the sacred balance in his adopted home of Ionia. Lightning fast and bearing the wisdom of a long and storied life, Kennen works with the Eye of Twilight, Shen, to protect the fragile harmony of the First Lands with a whirling storm of shuriken and devastating electrical energy.

A riotous domain of constant transformation, Bandle City was no place for a yordle like Kennen. Searching for harmony and balance, he ventured out from the spirit realm millennia ago. He explored the material realm with boundless curiosity, traveling great distances in a heartbeat. But he was drawn in particular to Ionia.

In the First Lands, he witnessed ancient wars that none now remember, and a land struggling to rebuild afterward. Kennen grew fascinated by a people seeking balance for themselves and their home. Over time, he returned to Bandle City less and less, choosing to remain in Ionia, where yordles were respected as creatures of the spirit realm. Though he did not age as beings of the material realm did, Kennen embraced mortals, studying them for generations. He admired how, despite their fragile lives, they were diligent protectors of the sacred balance.

Even so, there were threats to the tranquility of Ionia. Malevolent entities of the spirit realm traversed the land with ill intent. Kennen battled these disturbances alone for years, enjoying the fun each challenge brought, but in the end he understood he was doing little to address why the incursions were happening: imbalance. He discovered a fledgling order whose members actively pursued balance between the realms—who, after careful observation, would judge what needed to be done to restore it.

They called themselves the Kinkou.

Kennen was intrigued by the order, led by a distant Eye of Twilight and a vindictive Fist of Shadow. He realized that the Kinkou’s leadership required another aspect. A consensus builder, one who would prevent the warlike Fist from domineering over the introspective Eye, and likewise keep the Eye’s tireless observation from paralyzing the Fist.

As a creature of both the spirit and material realms, Kennen proposed that he was uniquely suited to be an arbiter. The order accepted Kennen’s wisdom, and he became the Kinkou’s first Heart of the Tempest. As part of the new triumvirate with the Eye of Twilight and the Fist of Shadow, Kennen passed judgment on how best to preserve balance, and his affability and diplomacy kept the Kinkou in harmony.

Moreover, Kennen noticed that a rift had grown between the order and the people around them, as judgments were carried out swiftly, mysteriously, and without chance for appeal. Again, the yordle realized he could fill a need for the Kinkou. With his fantastic speed and compassion, he was the ideal representative to communicate the judgments of the order to those affected by them. He’d seen how the Kinkou distanced themselves from the people, wearing masks over their faces, and took care to remove his to connect with those he sought to protect.

Yet there was another side to Kennen, a far more serious aspect as Heart of the Tempest. Charged with Coursing the Sun, he addressed challenges to the Kinkou’s judgments, and not always with words.

For sometimes, the cost of balance was the blood of the offender—and Kennen’s shuriken and summoned maelstroms were quite capable of silencing all dissent.

There have been many threats to the Kinkou over the centuries, but none as grave as the Noxian invasion and its aftermath. When Noxus invaded the First Lands, Kennen opposed joining the resistance, even as the war threatened to tear the Kinkou apart. In their darkest hour, after a coup led by a former acolyte named Zed, the yordle guided the order while the new Eye of Twilight, Shen, struggled to lead. Kennen urged the Fist of Shadow, Mayym, to look to her daughter Akali, whom he’d trained since childhood, and see her as a successor.

But even he couldn’t find the words to stop Akali from eventually leaving the Kinkou, frustrated at the order’s failure to act against Ionia’s enemies.

Recent events have tested Kennen, a new age of disruption and violence that has thrown Ionia into chaos. Come what may, he will protect the fractured Kinkou Order, fighting alongside Shen to defend the balance of the First Lands. Do not let Kennen’s diminutive appearance fool you—for the heart of the tempest is its calmest part, but when it turns its eye upon you, its force is never more than a moment behind.