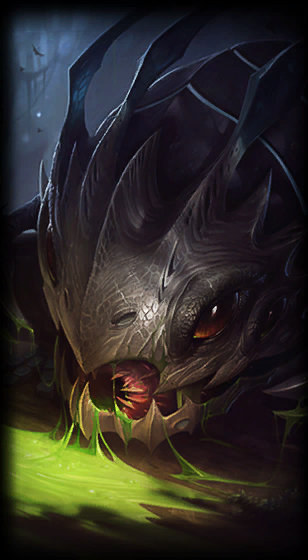 E
Ability
Direction
Affects
Enemies
Damage Type
Magic
Kog'Maw launches a peculiar ooze which damages all enemies it passes through and leaves a trail which slows enemies who stand on it.
12
60 / 70 / 80 / 90 / 100
Living Artillery

Belched forth from a rotting Void incursion deep in the wastelands of Icathia, Kog’Maw is an inquisitive yet putrid creature with a caustic, gaping mouth. This particular Void-spawn needs to gnaw and drool on anything within reach to truly understand it. Though not inherently evil, Kog’Maw’s beguiling naiveté is dangerous, as it often precedes a feeding frenzy—not for sustenance, but to satisfy its unending curiosity.

When the prophet Malzahar was reborn in Icathia, he was led there by an ominous voice which thereafter anchored itself to his psyche. From within, this voice bestowed upon him terrible purpose, and though Malzahar was no longer tormented by its call, the voice did not cease its unrelenting summons. This baleful beacon's gentle flicker - now fastened to Runeterra - drew forth a putrid beast that ambled across a threshold it did not understand, widening a fissure between the spaces which were never meant to meet. There amongst the haunting ruins of Icathia, Kog'Maw manifested in Valoran with unsettling curiosity. The spark which led him to Runeterra teased him still, urging him gently towards Malzahar. It also encouraged him to familiarize himself with his new environment, to the stark horror of everything he encountered on his journey.

The enchanting colors and aromas of Runeterra intoxicated Kog'Maw, and he explored the fruits of the strange world the only way he knew how: by devouring them. At first he sampled only the wild flora and fauna he happened across. As he traversed the parched Tempest Flats, however, he came upon a tribe of nomads. Seemingly unhampered by conventional rules of physics, Kog'Maw consumed every nomad and any obstacles they put in his way, amounting to many times his own mass and volume. The most composed of his victims may have had time to wonder if this was due to the caustic enzymes which stung the ground as they dripped from his gaping mouth, although such musings were abruptly concluded. Even this feeding frenzy did nothing to satiate Kog'Maw's appetite. His swathe of destruction continues still as he is inexorably drawn towards Malzahar. What happens when he finds him is anyone's guess.