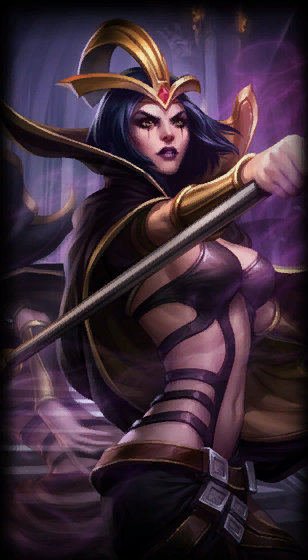 "The world is very different for those who cannot see beyond what is placed before their very eyes."
Champion Information
Primary Role

Matron of the Black Rose, LeBlanc’s identity is as intangible as the whispers that describe her, as ephemeral as the illusions that give her shape. Perhaps it is unknown even to herself, after so many centuries of mimicry and deception…

Remnants of an order that has existed far longer than Noxus itself, initiates of the Black Rose have schemed from the shadows for centuries, drawing the rich and powerful to their ranks. Though they do not often learn the origins of their matron, many have uncovered legends of a pale sorceress who aided the broken barbarian tribes, in their struggle against the infamous Iron Revenant subjugating lands already ravaged by the darkin. Even today, his name is whispered in fear: Mordekaiser.

Uniquely skilled among the revenant’s inner circle before she betrayed him, the sorceress pledged to neutralize the source of his power, the Immortal Bastion, cutting him off from the well of death that fueled his nightmarish empire. Yet, even as the barbarians built an empire of their own in the bastion’s shadow, they failed to realize that the arcane secrets it held had not completely been locked away. The pale sorceress had always been gifted at illusion, and her greatest trick was to make Noxus forget the dark power roiling in its own heart, before she was burned from the pages of history around the time of the Rune Wars.

The Black Rose exists now to further the clandestine interests of those who can wield such magic—with its rank-and-file composed of mundane nobles, drawn to rumors of miracles, kept in thrall and ruthlessly exploited. Even the most powerful military commander could only ever serve the cult’s true masters, as they fight one another for influence in games of intrigue and conquest, both in the Noxian capital and beyond its borders.

For centuries, LeBlanc has served in secret as an advisor to foreign dignitaries, appearing in many nations at once, her illusions driving order into chaos. Rumors of a new matron rising with each generation only raise further questions—which is the “true” version of herself? When she speaks, is it with her own voice? And what will the price be, for the favor she offers?

Boram Darkwill was but the latest to learn this last answer for himself. Though the Black Rose had aided his bid for the throne, he refused the counsel of their hand-picked advisors, requiring LeBlanc to take drastic measures. Manipulating a young nobleman named Jericho Swain into revealing the cult’s involvement, LeBlanc allowed herself to be executed along with the most prominent conspirators… or at least, so it appeared. In time, she reached out to Darkwill herself, and found an increasingly paranoid ruler, fearful of his own mortality.

After promising him the secrets to extend his life, LeBlanc slowly poisoned Darkwill’s mind, even as she empowered him. Under his rule, the Noxian reverence of strength became something far more sinister, and together they ensured Swain’s legend would end in disgrace on the battlefields of Ionia.

But Swain, emboldened by forbidden lore from within the Immortal Bastion, did something wholly unexpected, managing to drag Darkwill from the throne and seize Noxus for himself. This new Grand General was not interested in his own legacy, but the glory of the empire—and such a man could not so easily be corrupted. After countless centuries, LeBlanc wondered, had she finally found a worthy nemesis?

Her actions have pushed Runeterra to the brink of all-out war many times. In the wake of desperate campaigns across the Freljord, on Targon’s peaks, and deep in Shurima’s deserts, the darkest magic has begun to spread once more, circling closer and closer to Noxus. Whether LeBlanc is still the same pale sorceress who betrayed the Iron Revenant, or merely one of countless hollow reflections, her influence clearly stems from ancient roots.

The Black Rose has yet to truly bloom.