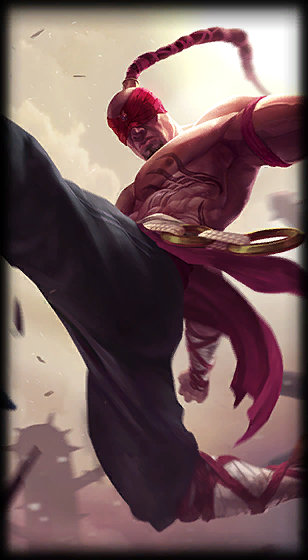 W
Ability
Unit
No Target
Affects
Self and Allies
Self
Safeguard: Lee Sin rushes to target ally, shielding himself from damage. If the ally is a champion, they are also shielded. After using Safeguard, Lee Sin can cast Iron Will for the next 3 seconds.
Iron Will: Lee Sin's intense training allows him to thrive in battle. For 4 seconds, Lee Sin gains Life Steal and Spell Vamp.
12
50
Tempest / Cripple

R
Ability
Unit
Affects
Enemies
Damage Type
Physical
Lee Sin performs a powerful roundhouse kick launching his target back, dealing physical damage to the target and any enemies they collide with. Enemies the target collides with are knocked into the air for a short duration. This technique was taught to him by Jesse Perring, although Lee Sin does not kick players off the map.
110 / 85 / 60

A master of Ionia’s ancient martial arts, Lee Sin is a principled fighter who channels the essence of the dragon spirit to face any challenge. Though he lost his sight many years ago, the warrior-monk has devoted his life to protecting his homeland against any who would dare upset its sacred balance. Enemies who underestimate his meditative demeanor will endure his fabled burning fists and blazing roundhouse kicks.

Among the many spirits Ionians revere, none are as storied as that of the dragon. While some believe it embodies ruin, others view it as a symbol of rebirth. Few can say for certain, and fewer still have ever been able to channel the dragon’s spirit, and none so completely as Lee Sin.

He arrived at the Shojin monastery as a boy, claiming the dragon had chosen him to wield its power. The elder monks saw flashes of its fire in the talented child, but also sensed his reckless pride, and the disaster it could bring. Warily, they nonetheless took him as a pupil—though, as others advanced, the elders kept him cleaning dishes and scrubbing floors.

Lee Sin grew impatient. He longed to fulfill his destiny, not waste time on chores.

Sneaking into the hidden archives, he found ancient texts describing how to call upon the spirit realm, and chose to flaunt his skill during a combat lesson. Brashly, he unleashed the dragon’s rage in a wild kick, paralyzing his learned instructor. Consumed with shame and banished for his arrogance, the young man set out to atone.

Years passed. Lee Sin wandered far, to distant places, benevolently aiding those in need. Eventually he reached the Freljord, where he met Udyr, a wildman who channeled the primal beasts of his homeland. The so-called Spirit Walker struggled to control the powers that warred within him, and Lee Sin began to wonder if controlling the dragon was even possible. Sharing a need for spiritual guidance, the two men forged a bond, and he invited Udyr on his journey back home.

The two were dismayed to hear that the empire of Noxus had invaded and occupied Ionia. Monks from every province had fallen back to defend the holy monastery at Hirana, high up in the mountains.

Lee Sin and Udyr found it besieged. Noxian soldiers had broken through to Hirana’s great hall. As Udyr leapt to join the fray, Lee Sin hesitated, seeing his former peers and elders fall to the enemy’s blades. The wisdom of Hirana, Shojin, so much of Ionia’s ancient culture—all would be lost.

With no other choice left, he invoked the dragon spirit.

A tempest of flames engulfed him, searing his skin and burning the sight from his eyes. Imbued with wild power, he crippled the invaders with a flurry of breakneck punches and rapid kicks, the untamable spirit flaring brighter and hotter with each blow.

The monks were victorious, but Lee Sin’s desperate actions left the monastery in ruins, and his vision would never return. At last, in the blind darkness, he understood that no mortal could ever bend the might of the dragon spirit to their will completely. Devastated, agonized, he bound a cloth over his sightless eyes and tried to stagger away down the mountain paths.

But the surviving elders stopped him. In forsaking all desire for power, their disgraced pupil was finally ready to begin anew. Although they would not forget his previous arrogance, the monks offered absolution: the dragon’s wrath was deadly and unpredictable, true enough, but the humblest and worthiest mortal souls could counter its fiery nature, and direct it from time to time.

Gratefully, Lee Sin stayed with the monks to rebuild their monastery, and after the work was done and the Spirit Walker returned to the Freljord, Lee Sin devoted himself fully toward the pursuit of enlightenment.

In the years since the war with Noxus ended, he has continued to meditate on his role in Ionia. Knowing his homeland has not faced the last of its trials, Lee Sin must master himself, and the dragon spirit within, to face whatever foe is yet to come.