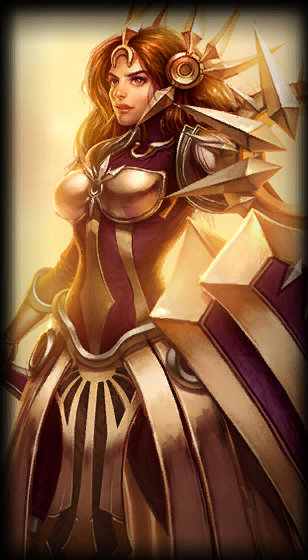 “By the light of the Sun, the world is beheld.”
~ Leona
Champion Information
Region

W
Ability
No Target
Affects
Self and Enemies
Damage Type
Magic
Leona raises her shield to gain Damage Reduction, Armor, and Magic Resist. When the duration first ends, if there are nearby enemies, she will deal magic damage to them and prolong the duration of the effect.
14 / 13 / 12 / 11 / 10
60
Zenith Blade

E
Ability
Direction
Affects
Enemies
Damage Type
Magic
Leona projects a solar image of her sword, dealing magic damage to all enemies in a line. When the image fades, the last enemy champion struck will be briefly immobilized and Leona will dash to them.
12 / 10.5 / 9 / 7.5 / 6
60
Solar Flare

R
Ability
Ground
Affects
Enemies
Damage Type
Magic
Leona calls down a beam of solar energy, dealing damage to enemies in an area. Enemies in the center of the area are stunned, while enemies on the outside are slowed.
90 / 75 / 60
100

Imbued with the fire of the sun, Leona is a holy warrior of the Solari who defends Mount Targon with her Zenith Blade and the Shield of Daybreak. Her skin shimmers with starfire while her eyes burn with the power of the celestial Aspect within her. Armored in gold and bearing a terrible burden of ancient knowledge, Leona brings enlightenment to some, death to others.

Among the Rakkor tribes that dwell upon Mount Targon, the sun is sacred, and none venerate it more than the Solari. Children are raised from birth to honor it, and even to shed blood for it, until its Aspect returns, heralding a grave threat they all must face.

Leona was one such child. She took to the Solari faith as naturally as breathing, finding solace and warmth within its rigid structure. This manifested through her rapid achievement of excellence, her peers envious of her capability, willpower, and devotion. None doubted she would one day become one of the Ra’Horak, the holy warriors of the Solari.

Though Leona flourished, she could not help but see her masters struggle with their most exasperating student, an orphan named Diana. Her curiosity was welcomed at first, but soon the teachers began to perceive Diana’s questions as challenging the Solari ways. Leona watched Diana suffer punishment and isolation—but where others saw insolence, she saw a lost soul devoted to a search for meaning.

Leona found her purpose in the Solari teachings, and resolved to share it with Diana as even the most dutiful teachers forsook her. The two would debate late into the night, with Leona hoping to persuade Diana that everything she could ever want was there in the faith, waiting for her to accept it. Though she failed to win Diana over, Leona did find a friend.

One night, Diana confided a secret to Leona. She spoke of discovering a hidden alcove in the mountain, an ancient place where the walls were etched with depictions of strange symbols and forgotten societies. When Diana mentioned climbing the summit of Mount Targon to learn more, Leona urged her to stop. Seeking to protect her from the ire of the other Solari, Leona made Diana promise to abandon this search. Reluctantly, Diana agreed.

Time passed, and the two never spoke of Diana’s discovery again. Leona believed her friend had finally come to her senses.

Her belief was shattered late one night, when she glimpsed Diana slipping out of the temple. While her first instinct was to tell the elders, Leona thought instead of protecting her friend, wresting her back from the edge. Resolved, Leona set off after Diana…

To the summit of Mount Targon.

The ascent was a trial unlike any Leona had ever endured, straining every fiber of her being to its limit, and beyond. Her training, willpower, and concern for Diana was all that drove her on. The unblinking eyes of bodies frozen into the mountain's slopes watched her climb, their own journeys forever incomplete, but not even they could deter her.

After what seemed an eternity—and much to her own amazement—Leona reached the peak.

Exhausted, she beheld an uncanny landscape, and found Diana engulfed in a coruscating column of silver light. Leona saw her friend’s silhouette writhing in agony, the air rippling with her screams. Horrified, Leona rushed to her aid, when a golden radiance slashed down from the heavens to envelop her.

The sensation was indescribable, but rather than incinerating Leona, the illumination coursed into her, suffusing her with incredible power. She clung to her consciousness, fighting the current seeking to sear away her very being.

Ultimately, her indomitable will triumphed—and with that control came understanding.

With control came understanding. Leona was forever changed, imbued by the Aspect of the Sun. Destiny had selected her, and it was her duty to protect the Solari in the times to come.

It was then that Leona saw Diana, clad in gleaming silver war-plate, a strange reflection of the golden armor she discovered herself now wearing. Diana begged Leona to join her, to seek out answers the Solari could not offer. Leona demanded they return home, and present themselves for the priests’ judgment. Neither conceded, and they finally felt the weight of the weapons in their hands.

Their combat was swift, a blistering clash between sun and moon, ending with Diana’s crescent blade at Leona’s throat. But, rather than delivering the killing blow, Diana fled. Devastated, Leona descended Targon and hurried to her elders.

When she arrived, she found slaughter. Many Solari priests and their Ra’Horak guardians were dead, seemingly slain by Diana’s hand. The survivors were awed by the presence of two Aspects now in their midst, and Leona was committed to helping them navigate this new reality—the guiding light to her people, just as the sun had always been.

She has sworn to find Diana, to preserve the dominance of the Solari... but also to help her old friend control the Moon Aspect’s power before it destroys her.