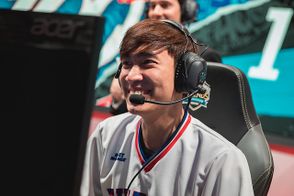 Đỗ "Levi" Duy Khánh is a Vietnamese player who is playing as Jungler for GIGABYTE Marines.

Đỗ Levi Duy Khánh joined SkyRed as the starting midlaner, later swapping to be the jungler. SkyRed finished 5th in the domestic league. Despite failing to make the playoffs, Levi was hailed as the impetus behind his team’s success. Seen as a mechanically skilled jungler with a keen ability to bust the game open by hunting his opponent counterpart down, many considered him to be one of the best performing junglers that split. His performance earned him his spot on the Vietnamese All-Star team that went on to win in the GPL qualifier and then the IWCI All-Stars event.

Levi joined GIGABYTE Marines on December 19, 2016. The GIGABYTE Marines then won 2017 Mountain Dew Championship Series Spring and GPL 2017 Spring with no loss match, qualifying them for the 2017 Mid-Season Invitational.

At MSI, the Marines ended the Play-In group stage at 1st place, with a 5-1 record, only dropping a game against LCL's representative, Virtus.pro. Advancing to the 2nd round, the team faced Team SoloMid and won the first 2 games of the series, before they were reverse swept, ending the match at 2-3. They then defeated SuperMassive eSports in the 3rd round (3-1) to make it to the Group Stage. Although the team failed to make it out of the Group Stage, they still managed to secure a Group Stage spot for the GPL region at the 2017 Season World Championship.

At Worlds, the Marines were placed in group B, alongside Longzhu Gaming, Fnatic, and Immortals. The Marines tied 2nd place with Fnatic and Immortals with a 2-4 record, forcing the three team to compete in a tiebreaker. The Marines advances as the highest seed in the tiebreaker due to shortest combined game victory time, however lost to Fnatic.

At Rift Rivals 2018 NA-EU, Levi substituted 100 Thieves' starting Jungler AnDa. 100 Thieves won only 1 game out of the 3 games they played. Levi also played in the AR URF Showmatch and the 2v2 Matches.

100 Thieves Academy placed 6th in the NA Academy 2018 Summer, barely making into playoffs. However the team lost to CLG Academy in the first round (2-3).

Levi was invited to join the VCS All-Star 2018 as a special guest alongside another Vietnamese jungler SofM.

Levi joined JD Gaming on December 14, 2018 and will be sharing the starting position with Flawless.