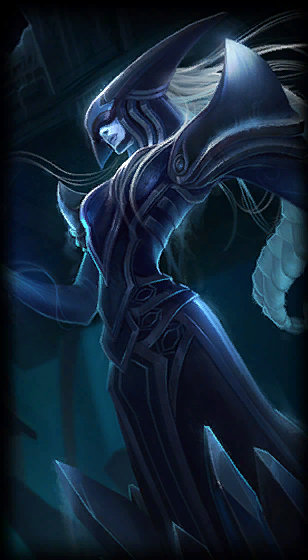 "So many secrets, buried in ice..."
Champion Information
Primary Role

In a time long forgotten, before the sands birthed and then swallowed Shurima, beings of old magic freely walked Runeterra. The borders between the mortal realm and what lay beyond it were hotly contested.

Into this dangerous and volatile age, Lissandra and her sisters, Serylda and Avarosa, were born. Each sought to harness the powers at war, and each paid a terrible price. Attempting to command the heavens above them, Serylda lost her voice to the first twilight. Avarosa faced the twisting dark beneath the world, and was deafened by its emptiness, waiting to consume all creation.

It was Lissandra who stood against the wild magic of the mortal world itself. For this defiance, the savage claws of a primal god raked across her eyes, blinding her.

Though each sister had lost a part of themselves, it was on the frozen fields of Lissandra’s many battles that they were able to unite and prevail. Together, they were unstoppable… but even a bond of blood could only weather so much.

With her sight taken, Lissandra chose instead to walk in dreams. As she navigated the fitful visions of those around her, she realized only she could see the darkness below for what it was: the lingering abyss promised not only an ending, but infinity. It was death, both dangerous and full of potential. Unknown to her sisters, Lissandra struck a deal on their behalf with the god-like entities she had communed with—the Watchers would grant them near-immortality in exchange for preparing Runeterra for the coming of the Void.

The three sisters and their most powerful followers were named Iceborn. Those with this ability to withstand the worst of the numbing frost would be spared until the very end.

However, Lissandra’s sisters grew displeased. Avarosa argued that the only thing worse than death was servitude. Even Serylda bristled against what would become of the world they had fought so hard for. Caught in the middle, Lissandra tried to soothe her sisters’ concerns while appealing to the Watchers for more time, but the unknowable nothingness cared not for such platitudes.

The Void erupted into the mortal world in the far north, and with it, Lissandra’s hidden allegiance to the Watchers became undeniable. In that moment, her only choices were to let all the world be consumed, or to give up what she cared for most—Lissandra sacrificed her sisters and the allies they had gathered, entombing the Watchers beneath a glacial barrier of magical ice that could never be melted.

Lissandra soon discovered that even this elemental power was not enough. The monstrous beings she had frozen were merely slumbering, slowly tainting the True Ice around them into something darker. Now, they wandered through Lissandra’s dreams as easily as she had theirs, and always she would wake, terrified, professing her loyalty to the chilling eternity they promised.

Ever the survivor, she gathered her remaining followers to venerate her and her departed sisters. If True Ice would delay the inevitable end of all things, then they had to gather as much of it as they could find, and scour the frozen lands for any of Iceborn descent to join their cause.

Lissandra and the first among her Frostguard did everything in their power to rewrite history, seizing all records of what had truly happened… and yet, rumors and prophecies persisted in myth and song. It was whispered that Avarosa and Serylda would one day return to unite the disparate tribes, and so Lissandra had any who were hailed as their reincarnations quietly killed. Even she retreated into the shadows, periodically renewing herself with the powers she had been gifted.

Like the threat that lies trapped beneath the ice, Lissandra has never been able to completely control her sisters’ legends. Whether from guilt or arrogance, her failure to eradicate their legacy has manifested once more in two powerful Iceborn—one an idealist, the other a conqueror—and now, between them, they lead many tribes within the Freljord.

Lissandra watches them carefully, seeking any opportunity to pit them against one another, all the while redoubling her own efforts to lock away the terrible secrets she has buried deep under her citadel.

And she must hurry, for the ice is beginning to melt.