From Liquipedia League of Legends Wiki
[e][h]Lucian
The Purifier 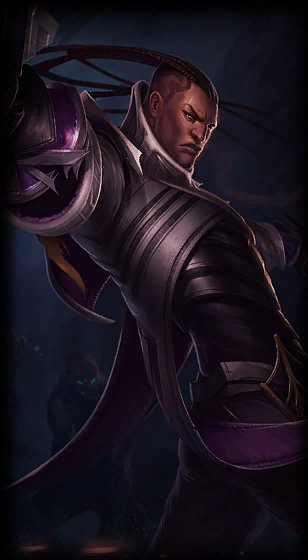 “Wield the light, endure the pain, and cleanse all shadow from this world.”
~ Lucian
Champion Information
Region

Passive
Ability
Passive
Affects
Enemies
Damage Type
Physical
Magic
Whenever Lucian uses an ability, his next attack becomes a double-shot. When Lucian is empowered by another Ally, his next 2 basic attacks will deal bonus magic damage.
Piercing Light

Lucian, a Sentinel of Light, is a grim hunter of undying spirits, pursuing them relentlessly and annihilating them with his twin relic pistols. After the wraith Thresh slew his wife, Lucian embarked on the path of vengeance—but even with her return to life, his rage is undiminished. Merciless and single-minded, Lucian will stop at nothing to protect the living from the long-dead horrors of the Black Mist.

From an early age, Lucian wanted nothing more than to be like his father, Urias, who was a member of the ancient order of the Sentinels of Light. While Lucian remained home in Demacia, Urias ranged far and wide, protecting the living from the wraiths of the Black Mist.

Urias would regale Lucian with tales of his adventures, where courage and ingenuity carried the day. Lucian hung on every word, picturing himself saving the people of Runeterra at his father’s side. But Urias did not want his son to follow in his footsteps, hoping to keep his family safe from the dangerous life he had chosen.

Lucian waited for the day he would become Urias’ apprentice, but it never came.

Instead, Lucian stayed in Demacia, where he found himself increasingly at odds with the kingdom’s culture. It especially rankled him that Demacia would exile peaceful mages to the hinterlands. Lucian found fulfillment in safeguarding the banished on their perilous journey. Where his countrymen saw only outlaws, reducing the world to good or evil, Lucian looked closer, and saw people in need of help.

After returning home from one such journey, Lucian found a stranger waiting at his door. She introduced herself as Senna, a Sentinel of Light. Cradling Urias’ relic pistol in her hands, Senna explained that Lucian’s father had died, falling in battle against the the long-dead wraiths of the Black Mist.

Senna had been Urias’ apprentice, fighting at his side for years.

Lucian reeled in shock—not only was his father dead, but before him stood a woman who had lived the life he had wanted for so long. As Senna made to take her leave, Lucian stopped her at the door, insisting he join her. He knew what came next—the vigil for lost Sentinels. Senna reluctantly allowed Lucian to accompany her.

Along the way, the two traded stories of their time with Urias, Senna comforting Lucian with her plainspoken wisdom, and Lucian easing her pain with fond remembrances. They arrived at Urias’ birthplace, far away from Demacian lands. There, they held the vigil for lost Sentinels.

As they prepared to depart, dark clouds rolled in over the coast, and wraiths manifested from the foulness, attacking them. Where Lucian was horrified, Senna drew her weapons with a grim familiarity—this was her curse. Since she was a child, tendrils of the Black Mist had stalked her wherever she went, unleashing its horror should she tarry anywhere for too long.

As Senna fought one of the creatures, it clawed Urias’ pistol from her grip. Lucian retrieved it, sensing his fate opening up before him. The blazing sorrow in his heart manifested in a bolt of light that blasted from the pistol, distracting the wraith so Senna could banish it. Senna fought off the remaining spirits before the pair left, the Mist ever on her trail.

Never before had one of the uninitiated fired a Sentinel’s relic weapon. For the first time, Lucian had shown Senna his potential to join the order.

Eventually, Senna entrusted Lucian with his father’s pistol, and instructed him in the tactics and doctrines of the Sentinels. He proved himself worthy of the lessons. A bond slowly formed between them, Lucian’s warmth and charm the perfect balance to Senna’s discipline and unbreakable resolve.

Lucian and Senna battled the myriad evils that ushered forth from the Black Mist, and their reliance upon each other blossomed into love. The closer Lucian grew to Senna, the more he witnessed the curse she bore. Each conflict hardened him, splitting the world apart into light and shadow, good and evil. Lucian’s urge to heal Senna became a crusade he pursued with reckless zeal.

Scouring a forgotten vault for a cure, the two Sentinels were attacked by the monstrous wraith Thresh. The ghoulish Chain Warden was a dangerous foe, and when Senna called to withdraw and regroup, Lucian refused to turn back. Throwing himself blindly into the attack, Lucian realized his mistake as Thresh gained the upper hand. Senna stepped into Thresh’s path, imploring Lucian to run.

As the dust settled, Senna lay dead before him, her soul claimed by Thresh’s eldritch lantern.

Senna’s sacrifice was nearly Lucian’s undoing. For years, he stalked Runeterra, a husk of the man he once was, his former warmth replaced with anger and bitterness. Wielding both his pistol and Senna’s, Lucian hunted Thresh in the hope of destroying the lantern and granting oblivion to his captive love. On the day that battle finally came, Lucian shattered the lantern—but instead of finding her eternal rest, Senna reemerged.

Lucian and Senna’s love is a bond even death could not sever. As Lucian struggles to grasp Senna’s altered form, he is forced to confront his own. Lucian now fights to return to his former self, while grappling with the reality that the dark forces he hates are all that keep Senna with him.

While Senna has returned with knowledge of a new mission, Lucian remains obsessed with exacting vengeance from Thresh, as he is certain the Chain Warden’s machinations have only begun.