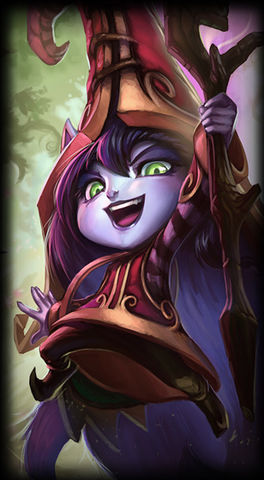 “The best path between two points is upside-down, between, then inside-out and round again.”
~ Lulu
Champion Information
Region

Passive
Ability
Passive
Affects
Enemies
Damage Type
Magic
Pix fires magical bolts of energy whenever the champion he's following attacks another enemy unit. These bolts are homing, but can be intercepted by other units.
Glitterlance

W
Ability
Unit
Affects
Allies or Enemies
If cast on an ally, grants them Attack Speed and Movement Speed for a short time. If cast on an enemy, turns them into an adorable critter that can't attack or cast spells.
16 / 15 / 14 / 13 / 12
65
Help, Pix!

R
Ability
Unit
Affects
Allies and Enemies
Lulu enlarges an ally, knocking nearby enemies into the air and granting the ally a large amount of bonus health. For the next few seconds, that ally gains an aura that slows nearby enemies.
120 / 100 / 80
100

The yordle mage Lulu is known for conjuring dreamlike illusions and fanciful creatures as she roams Runeterra with her fairy companion Pix. Lulu shapes reality on a whim, warping the fabric of the world, and what she views as the constraints of this mundane, physical realm. While others might consider her magic at best unnatural, and at worst dangerous, she believes everyone could use a touch of enchantment.

Lulu was always a caring and deeply empathetic yordle, who lived as much in her whimsical daydreams as in reality. One day, while wandering the material realm, she came upon what appeared to be a bird with a broken wing. She ran to help, at which point the bird turned into a tiny, mischievous fae spirit. Before she could react, the faerie grabbed her walking stick and took off. Giggling, Lulu gave chase.

The spirit led her far into the forest. They went over boulders, under logs, and around ancient, overgrown stone circles. The faerie darted into a cave hidden behind a waterfall, and Lulu went after it. It flittered ahead, always just out of reach.

Down and down and down they went. Lulu tumbled and scrambled around twisted roots and glowing mushrooms, and at some point they crossed over into the spirit realm without her realizing it. Their surroundings became progressively stranger and more disorienting; up became down, forward became backward, big became small.

Finally, after what seemed forever, Lulu caught up with the faerie, whose name, she discovered, was Pix.

With a click of his tiny fingers, Pix turned her humble walking stick into a spiraling staff, and tossed it back to her. It sprouted leaves and flowers, making Lulu gasp in delight. So began their forever-friendship, built of mischief, fun, and love of nature.

Pix had led her to the Glade.

Bandle City, Lulu’s home, was a bizarre and magical place that defied logic, where time was meaningless and the natural laws of the material realm did not wholly apply. And yet the Glade was a place stranger still—it existed long before yordles came into the world, and it was perhaps from the Glade that Bandle City itself sprung. A place of raw primordial magic, it was hidden away so deeply that no yordle had ever found it… until now.

Here, Lulu’s own magic became wildly magnified. Laughing joyfully, she discovered she could reshape her surroundings at will, as well as alter her form to whatever she wanted. Everything and anything from her overactive imagination came to life.

Lulu didn’t know if Pix had brought her here because he saw in her a kindred soul and simply wanted someone to play with, or if the Glade needed her for some other purpose—but she fell in love with it instantly. Her life became one of endless creation and play, and she soon forgot anything else existed.

When finally she remembered, it was like waking from a dream.

She found herself back in the material realm, not knowing if a single day had passed, or a thousand years. To her surprise and joy, she found that some of her newfound power had come with her, allowing her to make small things large, change colors to those more pleasing to her, and cause creatures to fall spontaneously asleep. To Pix’s endless amusement, she turned the mightiest beasts into tiny, bewildered frogs or squirrels with a flick of her staff.

Nevertheless, she began to miss the Glade. She decided to go back, but realized she didn’t remember the way. Pix was no help, claiming to have forgotten as well, though it was possible he just didn’t want to return quite yet.

Unperturbed, Lulu set out anyway. She was certain the route back to the Glade was always shifting, making one way as good as another. She simply picked whatever direction took her fancy at any particular moment, and even threw herself into seemingly terrible danger whenever it looked fun. Her travels took her far and wide, and magic, mayhem, and mishap tended to follow wherever she went.

In Demacia, she freed a group of children from their boring history lessons, and led them off into a nearby meadow. Her game resulted in them being turned into toadstools for a full turn of the moon, while their desperate parents and the local militia searched for them in vain. It wasn’t quite what Lulu had intended, but fun nonetheless. When the children finally returned home and told everyone what had happened, no one believed them.

In the borderlands of the Freljord, Lulu thought it would be hilarious to change the weapons of two rival tribes into flowers just as they clashed, which resulted in absolute chaos and confusion. More recently, she has found herself happily lost in Ionia, playing in the glowing everblooms of Qaelin, and playing pranks on bewildered acolytes of the Order of Shadow, who she thinks are far too serious for their own good.

While Lulu seeks to return to the Glade, and misses it, she is happy, for every day brings more opportunity for adventure and fun.

And besides, she has come to realize that she carries a part of the Glade in her heart, wherever she goes.