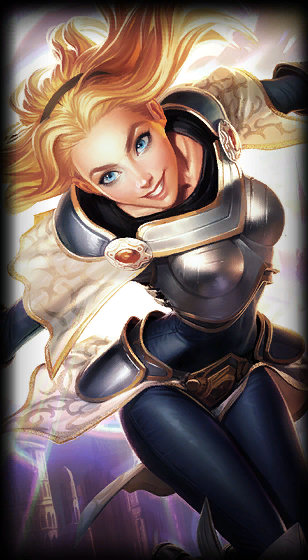 "The light inside is what makes me different, and I'm always careful where I shine it."
Champion Information
Primary Role

W
Ability
Direction
Affects
Allies
Lux throws her wand and bends the light around any friendly target it touches, protecting them from enemy damage.

Upon reaching its destination it returns to Lux, protecting her and other allied Champions it touches from another 50/65/80/95/110 (+20% of Ability Power) damage for 3 seconds.Shielding an ally with the outgoing shield doubles the value of the returning shield.
14/13/12/11/10
60
Lucent Singularity

E
Ability
Ground
Affects
Enemies
Damage Type
Magic
Fires an anomaly of twisted light to an area, which slows nearby enemies. Lux can detonate it to damage enemies in the area of effect.

R
Ability
Direction
Affects
Enemies
Damage Type
Magic
True
After gathering energy, Lux fires a beam of light that deals damage to all targets in the area. If Final Spark helps take down a champion, part of its cooldown is refunded. In addition, triggers Lux's passive ability and refreshes the Illumination debuff duration.

Luxanna Crownguard is a powerful young light mage from Demacia, an insular realm where magical abilities are viewed with fear and suspicion. Forced to keep her power secret for much of her young life, she grew up fearing discovery and exile, but learned to embrace her magic and covertly wields it in service of her homeland.

Luxanna - or Lux, as she preferred to be called - grew up in the Demacian city of High Silvermere, one of two children born to the prestigious Crownguard lineage; an honorific given to the family tasked with protecting the king. Her grandfather saved the king’s life at the Battle of Storm’s Fang, and her father took up the mantle of protection during the Noxian assault known as Cyrus’s Folly. Lux’s older brother, Garen, was also expected to bear that honor.

From the earliest age, both Lux and Garen were taught to fight, to ride and to hunt. But where Garen chose to follow family tradition to join the Dauntless Vanguard - one of Demacia’s elite fighting regiments - Lux harbored dreams of venturing beyond Demacia’s borders to explore the wider world. Her parents frowned upon such notions, and as their only other child, they expected her to take up the role of custodian and defender of the family’s estates. While this was an important duty, it was not what the idealistic and headstrong Lux envisioned for her future. She idolized Garen, but railed against his insistence that she put her ambitions aside and do what was expected of her, as all Demacians should.

Being told what to do did not sit well with young Lux, an irrepressible girl with big ideas and bright dreams. To the endless frustration of tutors who sought to prepare her for a life of dutiful service to the family, Lux would question their every teaching to pursue interesting new ideas, debate differing perspectives and generally frustrate her tutors. Yet it was impossible to be angry at Lux, her zest for life like an inner radiance soothing even the most ruffled of feathers. Lux had taken this state of affairs for granted, but with every passing day she came to suspect this was more than just poetic euphemism. The truth of what that meant finally came to light when Lux was enjoying a solitary ride in the northern mountains at dusk.

As the last light of day sank in the west, her horse lost its footing on a patch of ice and fell, breaking its foreleg. Lux was stranded; too far from the nearest town to reach it before nightfall, and too distraught at her mount’s pain to leave him. She knew what Garen would say; kill the horse swiftly to end its suffering. But Lux couldn’t bring herself to kill a mount she had ridden since she was a child. As Lux prepared for a night alone on the mountain, a lean and hungry sabrewulf pack, scenting the horse’s blood, descended from their dens in search of fresh meat.

As night fell and Lux had still not returned home, her father and Garen rode out to find her. They searched all night, and eventually found her the next morning, shivering and alone next to her frightened horse. The corpses of six sabrewulfs surrounded her, their fur scorched and flesh seared. Lux refused to speak of what happened and begged her father to rescue her beloved steed. A wagon was dispatched from the family home, and the horse was saved as Lux nursed it back to health.

Since that night, Lux knew she possessed abilities beyond those of everyone around her; abilities the people of magic-averse Demacia would view with hatred. Since a babe in arms, Lux had been taught that magic had once brought Runeterra to the edge of annihilation. Her own uncle had been slain by a mage, and Demacia’s folktales were replete with stories portraying sorcerers as twisted servants of evil, that told of how even the purest heart could be corrupted by magic. Would she become evil? Was she an abomination to be killed or exiled beyond the great wall? Fear and doubt gnawed at Lux, and she spent many nights squeezing her eyes closed, clenching her fists to stop the light rippling from her skin.

The terror that there was something wrong with her almost crushed her spirit. But after a strange night in the capital of Demacia when Lux was thirteen years old - a night where it was said a great stone colossus walked abroad in the darkness - she returned to High Silvermere with a fresh perspective on her powers.

The Crownguards left Garen in the capital to train with the Dauntless Vanguard, and Lux only saw her brother on his rare visits to High Silvermere, their relationship becoming more distant with each return. Upon Lux’s return home, she was determined to embrace her powers, not fear them. To the eternal consternation of her bodyguards, she regularly managed to evade them and ride away for hours at a time, far from judging eyes. Alone in the wild forests, she would give free rein to her magic, gradually learning to better control it. Finally she was free to let her powers loose in all their wild majesty. She could bend light to blind and confuse, bring forth radiance upon the palm of her hand or summon illuminated figures from thin air. She could also craft light so intense that it could burn and destroy. Once, these powers had frightened her, but now she reveled in them, joyous as she was finally able to fully express herself.

Yet even as she understood more of her powers, Lux knew she still had much to learn. Many times over the next few years, Lux was often the epicenter of curious phenomena within Crownguard Manor; dancing lights appearing throughout the castle, statuary reciting limericks to passersby, or giggling laughter where no one could be seen. Her family always found ways to explain away such events, and turned a blind eye to their obvious source. To confront the reality of what was happening would be to acknowledge a painful truth and expose the family to unwanted attention. Seeking to ground Lux in the realities of the world, her mother took her on regular tours of the Crownguard estates, visiting the many families under their protection. Despite her initial reluctance to take on this duty, Lux quickly became known as someone who would always listen, and always do whatever she could to help her people in times of adversity.

At the age of sixteen, Lux and her family traveled to the capital city of Demacia for a month to witness Garen’s investiture into the ranks of the Dauntless Vanguard. While in the capital, she continued her altruistic efforts, working to help those in need alongside a charitable religious order of Demacia known as the Illuminators. In the capital, as in High Silvermere, Lux made a name for herself as a young woman of immense kindness and great wit. During her stay, she befriended a knight of the Radiant Ones, the warrior order of the Illuminators, named Kahina. She regularly sparred with Kahina between the many balls and functions she was expected to attend with her family, quickly establishing a deep bond with the warrior woman.

But as each night fell, Lux’s zestful streak once again came to the fore, and she would use her powers to slip beyond the city walls. Demacia had beguiled Lux with its beauty, but on one exploration to a village in the shadow of a wild forest, she was to learn that darkness can take root even in the brightest garden.

Lux stumbled upon a nest of flesh-eating creatures preying upon the village’s inhabitants and tracked them to their forest lair. The creatures dwelled in a subterranean cave system filled with gnawed bones, and, seized by a sense of youthful invulnerability and wrathful indignation, she attacked with coruscating blasts of searing magic. Lux killed dozens of the monsters, but, in her impetuousness, she had underestimated their numbers and the creatures soon overwhelmed her. Just before the monsters tore out her throat, a cadre of Radiant Ones who had also been tracking these monsters attacked the lair and put them to the sword. The leader of these warriors was Kahina. And she had seen what Lux could do.

Lux was escorted back to Demacia and presented to the innermost circle of the Illuminators. Here, she was given a stark choice. Use her powers beyond Demacia’s borders to learn of its enemies or be exiled forever as a wielder of magic. That Demacia had an order willing to use magic came as a shock to Lux, but the choice they offered was too enticing to refuse. Lux readily accepted. Her parents returned to High Silvermere, told only that their daughter had been seconded to serve the crown and would remain in Demacia to join the ranks of the Radiant Ones. They were surprised, but pleased Lux had finally found her place in Demacia.

Lux remained in the capital for a number of years, training with the Radiant Ones and learning from the Illuminators before taking on her first mission. She was to infiltrate the contested lands between eastern Demacia and the Noxian empire to investigate signs that enemy agents were attempting to unite these buffer states against Demacia. Lux’s mission was a complete success and the nefarious plot failed, the fragile alliances being brokered by Noxian agents collapsing in a flurry of betrayals and deceit. Further missions followed, each one cementing Lux’s reputation as someone who could get the job done, no matter how difficult.

Beyond Demacia’s walls, Lux learned more of the world and saw its rich diversity, storied history and myriad peoples. She came to understand that the Demacian way was not the only way, able now to recognize its flaws as well as its boons. While away from her homeland, Lux can freely wield her powers, but keeps them hidden when she returns home to visit her parents and Garen. To her brother and family, she is a loyal servant of Demacia... which is true, just not in a manner they would ever expect.