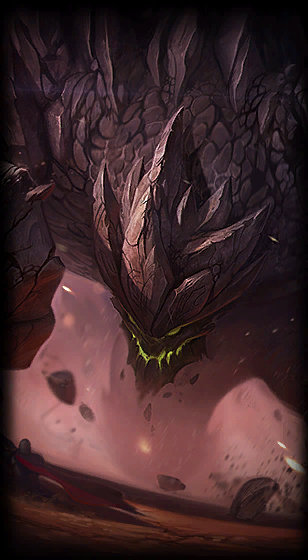 “Beware, minions of chaos! The Shard of the Monolith has come.”
Champion Information
Region

Passive
Ability
Passive
Affects
Self
Malphite is shielded by a layer of rock which absorbs damage up to 10% of his maximum Health. If Malphite has not been hit for a few seconds, this effect recharges.
Seismic Shard

Q
Ability
Unit
Affects
Enemies and Self
Damage Type
Magic
Malphite sends a shard of the earth through the ground at his foe, dealing damage upon impact and stealing Movement Speed for 3 seconds.
8
70/75/80/85/90
Thunderclap

W
Ability
No Target
Affects
Enemies
Damage Type
Physical
Malphite attacks with such force that it creates a sonic boom. For the next few seconds, his attacks create aftershocks in front of him.
12
30/35/40/45/50
Ground Slam

E
Ability
No Target
Affects
Enemies
Damage Type
Magic
Malphite slams the ground, sending out a shockwave that deals magic damage based on his Armor and reduces the Attack Speed of enemies for a short duration.
7
50/55/60/65/70
Unstoppable Force

R
Ability
Ground
Affects
Enemies
Damage Type
Magic
Malphite launches himself to a location at high speed, damaging enemies and knocking them into the air.
130/105/80
100

A massive creature of living stone, Malphite was born from the heart of the great Ixtali construct known as the Monolith. He has studied the elemental balance of Runeterra for centuries, using his tremendous strength to maintain order in a frequently chaotic world, and crush the dark things that crawl beneath it. Now, roused all too often from his slumbers, Malphite endures the fluid temperaments of mortals, in pursuit of the only cause worthy of the last of his kind.

For more than two millennia, Shurima dominated the known world—an empire that reigned over countless peoples without challenge, and without threat.

Until the day Icathia fell.

From the moment the Void tore its way into the material realm, the armies of Shurima faced an enemy that could not only lay their grand empire low, but one that seemed to grow stronger the more they fought it. The corruption spread rapidly from Icathia’s ruins, boiling over the land and beneath the oceans, before its hideous tendrils reached the southernmost jungles of Ixtal.

Ne’Zuk of the Ascended Host was an Ixtali elemental mage of colossal power, and almost unrivaled arrogance. He went before the emperor, pledging to create a weapon powerful enough to take the fight to the Void, and eradicate it at the source of its original eruption.

After months of inhuman labor, Ne’Zuk revealed the Monolith—a floating fortress of living stone, maintained by the greatest elemental mages, and its ramparts manned by his fellow Ixtali god-warriors. The size of a city itself, the Monolith glided titanically toward the wastelands of Icathia, the lightning crackling from its magical inhibitors fusing the sands to glass beneath it. Ne’Zuk and his superweapon arrived at their destination, to face once more the howling infinite darkness of the abyssal realm, and the hordes of Voidborn monstrosities it had created.

The battle dragged into weeks. It was violence of a scale and intensity never before witnessed in Runeterra. Sorcery enough to raze entire civilizations, or render whole continents into naught but a memory, was unleashed upon the Void.

The darkness retaliated in kind. Its hideous energies gouged deep wounds into the living stone of the Monolith, whose surfaces became pocked and seared with unnatural malphite—from the Ixtali for “bad stone”—and leaving mineral-like scars. The fortress was pushed to the very limits of its design, struggling to self-repair and reknit its weakened superstructure… but even the incredible magics that held it aloft had a breaking point.

As Ne’Zuk fought to rally his Ascended brethren for one last, desperate charge, the unthinkable happened. Sagging for an instant, the Monolith crashed down to earth, cleaving through the bedrock of Icathia and opening the Void beneath to the skies.

Much of the fortress was lost within that gaping maw, vanishing into the silent nothingness beyond. The rest rained down as great ruins, littering a landscape already blackened by the terrible conflict that had been cut so abruptly short. Only a single Ascended survived—Ne’Zuk hauled himself from the wreckage, choking on the ashes of what was meant to be his grandest triumph, now his greatest folly, and fled for his life.

In defiance of all worldly reason, some disparate fragments of the Monolith endured, still imbued with something like magical life. The far-flung shards struggled to heal, to reform the whole to which they had once belonged. But the Void’s endless hunger leached away at them, rendering them as little more than inert shapes clawing feebly in the dust.

However, against all that had been lost, a single shard remained.

Buried deep beneath the surface, forgotten even by those that dwelt in the abyss, it slowly gathered in strength. It lived, until at last it awakened after uncounted centuries, and realized it was alone.

In all the centuries since that dark day, Malphite, the last shard of the Monolith, has become something of a legend in Runeterra. It has reputedly been sighted everywhere, from Targon to Zaun; heard sometimes as a tectonic roar in the deepest caverns, and sometimes as a quiet voice, humming to itself, that it might still remember the sounds of the world it once knew.

Despite the enormous span of its existence, the overwhelming drive enkindled by Ne’Zuk’s creation of the Monolith has not wavered. Now, Malphite knows it must soon rise to meet the resurgent darkness it once battled, as the Void awakens to threaten all of Runeterra once more.