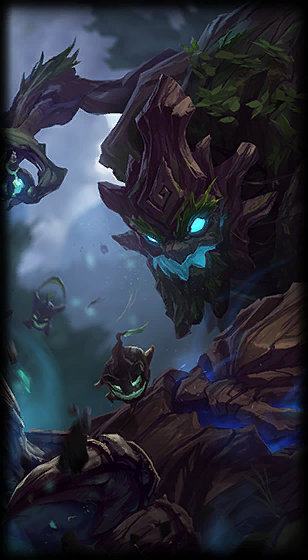 “All around me are empty husks, soulless and unafraid... but I will bring them fear.”
~ Maokai
Champion Information
Region

Passive
Ability
Passive
Affects
Self
Maokai's basic attack also heals him on a moderate cooldown. Each time Maokai casts a spell or is struck by an enemy's spell, this cooldown is reduced.
30 / 25 / 20
Bramble Smash

Maokai is a rageful, towering treant who fights the unnatural horrors of the Shadow Isles. He was twisted into a force of vengeance after a magical cataclysm destroyed his home, surviving undeath only through the Waters of Life infused within his heartwood. Once a peaceful nature spirit, Maokai now furiously battles to banish the scourge of unlife from the Shadow Isles and restore his home to its former beauty.

Long before living memory, a chain of islands erupted from deep beneath the ocean tides as blank slates of rock and clay. With its creation, the nature spirit Maokai was born. He took the form of a treant, with his tall body covered in bark and long limbs resembling branches. Maokai felt the profound loneliness of the land and its potential for teeming growth. He wandered from island to island in search of signs of life, growing ever more forlorn in his solitude.

On a hilly isle covered in soft, rich soil, Maokai sensed a boundless energy radiating from deep beneath the ground. He plunged his great roots downward until they reached a spring of magical, life-giving water and drank deeply. From this potent liquid, he grew hundreds of saplings and planted them across the islands.

Soon the land was shawled with verdant forests, groves of towering virenpine, and tangled woods, all steeped in wondrous magic. Magnificent skytrees with expansive canopies and thickly winding roots covered the isles with lush green foliage. Nature spirits were drawn to the lavish vegetation, and animals reveled in the fertile greenery.

When humans eventually came to the islands, they too thrived in the land’s abundance and formed an enlightened society of scholars devoted to studying the world’s mysteries. Though Maokai was wary of their presence, he saw how they respected the sanctity of the land. Sensing the deep magic within the woods, the humans built their homes in areas not heavily forested, to avoid disturbing any nature spirits. Maokai occasionally revealed himself directly to those he trusted and blessed them with knowledge of the verdant isles, even its greatest gift – the underground spring that could heal mortal wounds.

Centuries passed, and Maokai lived in idyllic contentment until a fleet of soldiers from across the sea beached upon the shores of the isles. Maokai sensed something was terribly wrong. Their grief-maddened king bore the corpse of his queen and in hopes of reviving her, bathed her decayed flesh in the healing waters. Reanimated as a rotting corpse, the queen begged to return to death. The king sought to reverse what he had done, unwittingly casting a terrible curse upon the land.

From leagues away, Maokai felt the first ripples of the disaster that would soon devastate the isles. He sensed a horrific force gathering beneath the soil, and a bitter chill washed over him.

As the ruination spread, Maokai desperately plunged his roots deep into the ground and drank of the healing waters, saturating every fiber of his being with their magic. Before the cursed water reached him, Maokai withdrew his roots, severing all connection to the pool. He howled in rage as the sacred reservoir he had entrusted to men was fully corrupted – the spiraling coils churning underwater until nothing pure remained.

Moments later, the mists surrounding the islands blackened and spread over the land, trapping all living things in an unnatural state between life and death. Maokai watched in helpless agony as all he knew – plants, nature spirits, animals, and humans alike – twisted into wretched shades. His fury grew; the great beauty he had cultivated from tiny saplings fell to ruin in an instant at the careless hand of man.

The enervating mist coiled around Maokai, and he wept as the bright flowers adorning his shoulders crumbled and fell to dust. His body shuddered and contorted into a mass of gnarled roots and tangled branches as the mist leached life from him. But Maokai’s heartwood was saturated with the precious waters of life, saving him from the terrible fate of undeath.

As grotesque wraiths and horrific abominations flooded the land, Maokai was overcome by a host of lifeless men. He struck the spirits with his branchlike limbs in manic violence, realizing the force of his blows could shatter them to dust. Maokai shuddered with revulsion: he had never killed before. He flew at the breathless shapes in a frenzy, but hundreds more overwhelmed him, and eventually he was forced to retreat.

With his home all but decimated and his companions turned to deathless horrors, Maokai was tempted to try and escape the nightmare of the isles. But from deep within his twisted form, he felt the sacred waters giving him life. He had survived the Ruination by carrying the very heart of the islands within him, and he would not abandon his home now. As the Blessed Isles’ first nature spirit, he would remain and fight for the soul of the land.

Though surrounded by endless hosts of malicious foes and darkening mist, Maokai fights with furious vengeance to conquer the evil that plagues the isles. His only pleasure comes from dealing savage violence to the soulless wraiths who roam his land.

Some days, Maokai subdues the mist and its deathless spirits, breaking their hold on a grove of trees or a small thicket. Though new life has not bloomed in such cursed soil for an age, Maokai strives to carve havens, however temporary, free from regret and decay.

So long as Maokai continues to fight, hope remains, for steeped within his heartwood are the uncorrupted waters of life, the last remaining chance of restoring the isles. If the land returns to its joyous state, Maokai, too, will shed his twisted form. The nature spirit brought life to these isles long ago, and he refuses to rest until the isles bloom once more.