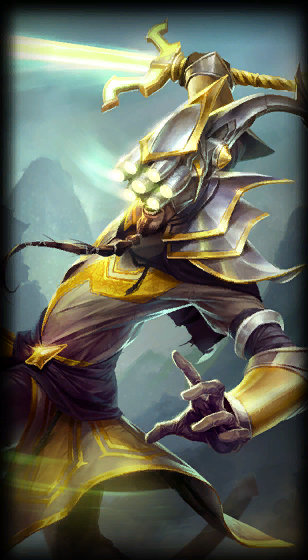 "The edge of the sharpest blade is no match for the calm of the peaceful mind."
Champion Information
Primary Role

W
Ability
No Target
Affects
Self
Master Yi rejuvenates his body by focus of mind, restoring Health and taking reduced damage for a short time. In addition, Master Yi will gain stacks of Double Strike and pause the remaining duration on Wuju Style and Highlander for each second he channels.

In addition, Master Yi will gain stacks of Double Strike and pause the remaining duration on Wuju Style and Highlander for each second he channels.

E
Ability
No Target
Affects
Self
Damage Type
True
Master Yi becomes skilled in the art of Wuju, passively increasing his Attack Damage. Activating Wuju Style grants bonus true damage on basic attacks, but the passive bonus is then lost while on cooldown.

R
Ability
No Target
Affects
Self
Master Yi moves with unparalleled agility, temporarily increasing his Movement and Attack Speeds as well as making him immune to all slowing effects. While active, Champion kills or assists extend Highlander's duration. Passively reduces cooldown for his other abilities on a kill or assist.

In Ionia’s central province of Bahrl, a mountain settlement once stood, hidden away in its serene beauty. Here, in the village of Wuju, the boy Yi grew up learning the ways of the sword, chasing a dream that later turned to tragedy.

Like most children, he admired those who wore silk robes and carried blades with poems to their name. His parents being swordsmiths, Yi made a strong impression on the local warriors who frequented their workshop. He spent his mornings in the garden, sparring with his mother, and his nights reciting poetry to his father by candlelight. When it came time for Yi to study under Wuju’s masters, his parents could not have been prouder.

Carrying his talent and discipline over to his training, he surpassed every expectation. Soon, the whole village knew of the “Young Master” Yi.

Still, the humble student wondered about the rest of Ionia. From atop the tallest pagodas, he spotted faraway towns no one else ever mentioned, but when he sought to journey down the mountain with blade in hand, his mentors forbade him. Wuju was founded by those believing their swordsmanship to be too precious to share, too sacred to draw blood—so for centuries, it flourished in isolation, with no outsiders knowing its true nature.

All this changed the day Yi saw vast plumes of smoke rising above the distant towns. Noxian warbands had invaded from the coast, conquering settlement after settlement in waves that washed the provinces red. Choosing the people of Ionia over Wuju’s hallowed tradition, Yi ventured down to help defend the First Lands. To astonished eyes, he swept across the front lines in a blur, routing the enemy with blinding swordplay never before seen by outsiders.

Word of the one-man army spread far and wide, like mist in the mountains. Inspired by his courage, even his fellow disciples joined the fight, and together they journeyed to Navori where the greater war was raging.

The Noxian commanders saw in Wuju a threat that could not be ignored. They scouted the origin of these peerless warriors, and elected to strike at their home without mercy. In a single night, the entire village was destroyed, its people and culture obliterated by chemical fire that no steel could hold back.

After the war finally ended, Yi returned as the only surviving disciple, to find nothing but ruins. The very magic of the land had been defiled, and everyone he had known and loved was no more. Slain in spirit, if not in body, Yi became the attack’s final casualty. With no other practitioners of Wuju left alive, he realized the title of master was his to bear alone.

Grief-stricken, he chose seclusion, training obsessively to bury the guilt of his survival, but the wisdom of bygone masters seemed to fade with the haze of time. He began to doubt if one man could preserve an entire heritage… until he encountered the least expected of individuals.

A curious, monkey-like vastaya challenged him to a duel. Reluctantly, Master Yi entertained the creature’s demands, defeating him with ease. But the vastaya refused to give up, returning day after day with increasingly clever tricks that forced Yi to react and improvise. For the first time in years, Yi felt the spirit of Wuju once more.

The two clashed for weeks, until the bruised stranger finally knelt on the ground and introduced himself as Kong, of the Shimon tribe. He begged to learn from Yi, who saw in this reckless but determined fighter the makings of a new disciple. Through teaching, Yi found his purpose restored. He would pass on the ways of Wuju, and gifted his pupil an enchanted staff and an honorific as a sign of this vow—from that day onward, Kong was known as Wukong.

Together, they now travel the First Lands, as Yi seeks to honor the legacy of his lost home, allowing him to fully embody the “master” in his name.