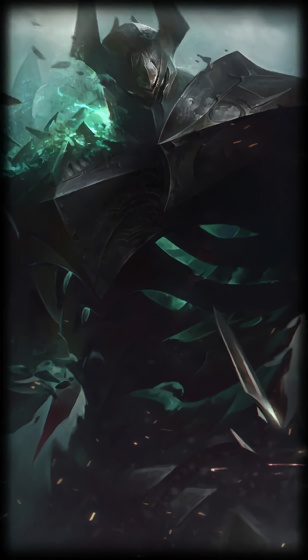 The baleful revenant Mordekaiser is among the most terrifying and hateful spirits haunting the Shadow Isles. He has existed for countless centuries, shielded from true death by necromantic sorcery and the force of his own dark will. Those who dare face Mordekaiser in battle risk a horrific curse: he enslaves his victims’ souls to become instruments of destruction.

Mordekaiser was once mortal, a brutal warlord-king who ruled the lands of eastern Valoran long before the rise of Demacia or Noxus. He waded into battle bedecked in heavy iron armor and slaughtered all who opposed him, crushing them beneath his ensorcelled mace, Nightfall.

As hated as he was feared, his enemies finally rallied to end his dark reign. After a long and bloody day of battle, Mordekaiser met his fate standing atop a mountain of corpses, surrounded by his foes. He laughed even as he died, pierced by arrows, swords and spears, promising his killers that he would come back for them.

His body was hurled upon a immense pyre amid great celebration from his enemies. While the flames were unable to do more than blacken his armor, Mordekaiser’s body was reduced to charred bones.

The fires burned for days on end, but as they finally died down and the victors moved on, a coterie of sorcerers slunk forward and sifted through the ashes, gathering up Mordekaiser’s armor and bones. They bore them away in secret, and on a moonless night they laid the skeleton upon a rune-carved slab and enacted a spell of vile, necromantic sorcery. As their dark magicks reached a crescendo, a shadowy form appeared upon the slab. The deathly shade rose to its feet, leaving the skeleton behind.

It was a wraith formed of pure darkness, yet its eyes burned with malice. The fire-blackened pieces of armor slammed into place around the shadowy spirit, as if drawn to a powerful lodestone, and the sorcerers dropped to their knees before their risen master. They had been promised great power for their service, but had not foreseen how they were to be rewarded.

With newfound mastery over the necromantic arts, Mordekaiser gifted the sorcerers with undeath, trapping them between life and death. They became vile liches, living corpses cursed to serve him until the end of time.

Over the next decade Mordekaiser saw all those who had defied him slain. He cursed them into eternal servitude, drawing out their souls and forcing them to obey his undying will.

Having assumed the mantle of Iron Revenant, Mordekaiser’s nightmarish reign of darkness lasted many centuries. Several times he was seemingly slain during this period, yet always he returned, brought back by the power of his soul-bound liches.

Mordekaiser’s bones were key to his unholy reincarnation, and as the centuries rolled on he became increasingly paranoid about their safety. He constructed a monolithic fortress at the heart of his empire that came to be known as the Immortal Bastion. Locked away at the core of this epic stronghold he hid his remains.

The Immortal Bastion was eventually besieged by a concentrated alliance of tribes and warbands. During the siege, an unknown thief infiltrated the mighty fortress, bypassing its fiendish defenses to steal Mordekaiser’s skull. His skeleton needed to be complete in order for his resurrection to be enacted, yet fearful of their master’s wrath, his enslaved liches kept the theft a secret.

On the walls of the Immortal Bastion, countless enemies fell before Mordekaiser, yet it was not enough to stave off defeat. His fortress was overrun and he was dragged down by sheer weight of numbers. His deadly mace was torn from his grasp and great chains wrapped around his limbs. The booming of his laughter echoed through the darkness – he had no reason not to believe he would be reborn anew, as he had been many times before. The chains binding him were hitched to hulking Basilisks, and with a barked order the immense scaled beasts ripped him apart.

Mordekaiser’s skull was taken across the sea to the Blessed Isles, a land hidden in mist and legend. The wise adepts of that land knew of Mordekaiser, and of his weakness. They had stolen his skull in order to rid the world of his unholy presence, placing it in a vault deep beneath the ground, secured behind locks and magical wards. Mordekaiser’s servants were scattered to the corners of the world, seeking his lost skull, but were always unable to locate it. It seemed Mordekaiser’s reign was truly over.

Years rolled into decades, decades to centuries, until a cataclysm was unleashed upon the Blessed Isles. A king whose mind had been ruined by grief and madness unleashed a terrible spell that condemned the isles to darkness, turning them into a twisted realm of the undying – the Shadow Isles. During that great sorcerous explosion, the vaults securing Mordekaiser’s skull were torn asunder.

Drawn like moths to a flame, Mordekaiser’s liches made their way to the newly born Shadow Isles. They bore with them their master’s bones, and digging his skull from the ruins, were finally able to unleash him upon the world once more.

Mordekaiser has since carved out his own empire upon the Shadow Isles, enslaving a growing army of the dead. He looks down upon these newly formed undying spirits as a lesser breed, for he chose his path freely, while these others are merely lost souls. Nevertheless, he sees their use; they will be his foot-soldiers in the conflicts to come.

Unlike the lesser spirits, Mordekaiser is not bound by the Black Mist – he is too powerful for that – yet its baleful energy grants him considerable power. For now at least, the Shadow Isles serves as the perfect place to build his strength.

While he consolidates his power, and constantly obsesses over making his bones ever-more secure, Mordekaiser has begun to look across the seas, towards Valoran. He has set his sights on the empires and civilizations that have risen since his absence. In particular, his attention is drawn to the Immortal Bastion, that mighty fortress that now acts as the capital city of the upstart empire called Noxus.

A new era of darkness beckons.