From Liquipedia League of Legends Wiki
[e][h]Morgana
The Fallen 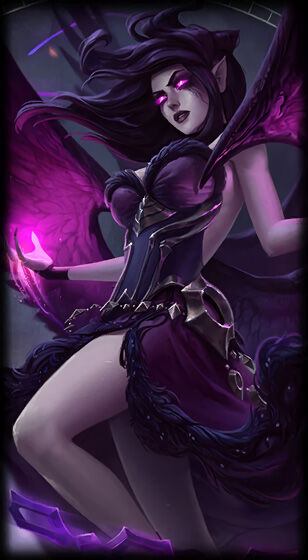 “Only those you love can break your heart.”
~ Morgana
Champion Information
Region

W
Ability
Ground
Affects
Enemies
Damage Type
Magic
Morgana casts a cursed shadow on an area, damaging enemies who dare stand in her dark circle. They receive magic damage over time, which increases the lower health they are.
12
70 / 85 / 100 / 115 / 130
Black Shield

E
Ability
Unit
Affects
Allies
Morgana anoints an ally with a protective barrier of starfire, which absorbs magical damage and disabling effects until it is broken.
24 / 22 / 20 / 18 / 16
80
Soul Shackles

R
Ability
No Target
Affects
Enemies
Damage Type
Magic
Morgana unleashes the full force of her Celestial power as she unbinds her wings and hovers above the ground. She lashes chains of dark pain onto nearby enemy champions, gaining Move Speed towards them. The chains slow and deal initial damage and, after a delay, stun those who are unable to break them.
120 / 110 / 100
100

Conflicted between her celestial and mortal natures, Morgana bound her wings to embrace humanity, and inflicts her pain and bitterness upon the dishonest and the corrupt. She rejects laws and traditions she believes are unjust, and fights for truth from the shadows of Demacia—even as others seek to repress it—by casting shields and chains of dark fire. More than anything else, Morgana truly believes that even the banished and outcast may one day rise again.

Whether through destiny or circumstance, Morgana and her sister were born to a world in conflict. The cataclysmic Rune Wars had ripped through most of Valoran and Shurima, and seemed poised to engulf even the peaks of Targon. Morgana’s parents, Mihira and Kilam, knew the legends of the great mountain granting divine power—they saw no other choice than to attempt the long and perilous journey, if their tribe was to be saved.

Even when they learned Mihira was with child, they could not turn back. Finally, where Runeterra touches the stars, Kilam watched in wonder and fear as Mihira was chosen to embody the Aspect of Justice.

The couple returned not only with the salvation they sought, but twin daughters—Morgana and Kayle. However, the celestial power that claimed Mihira began to overshadow her mortal personality and affections. She would often push the girls into their father’s arms, abandoning them to answer battle’s call.

For many months, uncertainty gnawed at Kilam. The wars still raged on countless fronts, and his beloved wife was slipping away. Fearing for his daughters’ safety, he waited for Mihira to leave once more, then fled Targon with them both.

Though their destination did not yet have a name, it would become known as a haven from magic and persecution: the kingdom of Demacia.

There the twins grew different as day and night. While Kayle studied the settlement’s growing set of laws, dark-haired Morgana became troubled by their distrust of new arrivals. Knowing what it was to be a refugee, she wandered the wilds, talking to wayward mages and others cast out for the dangers they might bring. At home, she felt her father’s heartbreak at leaving Mihira behind, and grew bitter at her mother for causing such pain.

Morgana’s fears that she and Kayle might carry some remnant of the Aspect’s power were eventually confirmed, when a great blade wreathed in shadow and starfire fell from the heavens. As it pierced the ground, splitting in two, feathered wings burst from the girls’ shoulders. Their father wept at the sight of them each taking up half of the weapon, and turned away even as Morgana reached out to comfort him.

While Kayle embraced their new calling, rallying an order of judicators to enforce the laws, Morgana resented her gifts… until the night their settlement was raided. Kilam found himself surrounded as the fighting spread. In that moment, Morgana rushed to shield him, burning his attackers to ash. Together, the sisters saved countless lives, and were hailed as the Winged Protectors of Demacia.

But Kayle grew more extreme in her ideologies, and Morgana increasingly found herself pleading the case of those who wanted to atone for their crimes. An accord was struck between the sisters and their mortal devotees—though it was uneasy, and did not last. Kayle’s most ardent disciple, Ronas, came to arrest Morgana herself. Attempting to protect her penitent followers, she shackled him with dark flame until he fell to the floor, dead.

Divine fire lit the city from above as Kayle swore to bring Ronas’ killer to justice, and Morgana met her sister in the skies.

They raised their blades, each matching the other with arcs of blinding light and burning darkness that lashed down at the buildings beneath them. It seemed certain that one of them would win… but Morgana faltered when she heard their father’s anguished voice. Kilam lay in the rubble, mortally wounded. Howling with grief, Morgana hurled her half of their mother’s sword at Kayle, and plunged to the surface like a meteorite.

She cradled her father, cursing their inheritance for the destruction around them. Kayle landed, dumbstruck, and Morgana demanded to know if the smiting of wicked mortals included Kilam, whose crime was stealing them away from their mother. Kayle gave no answer, but soared into the heavens without looking back.

Morgana’s wings became an inescapable reminder of her pain. She tried to cut them from her flesh, but could find no blade strong enough. Instead, she bound them with iron chains, resolving instead to walk the world of mortals.

Over the centuries, her tale fell into myth, and the name Morgana was all but forgotten. To this day, the people of Demacia venerate “the Winged Protector,” but recall only the glory and truth of one sister, while Morgana’s dark outbursts and belief in personal redemption became the mysteries of “the Veiled One.”

Through all of this, she still refuses to abandon those who would seek her aid. Bitter, betrayed, she bides her time in the kingdom’s shadows, knowing with certainty that Kayle’s light will someday return to Runeterra, and all will face her judgment.

As magic begins to rise again, Morgana sees that dawn is nearly upon them.