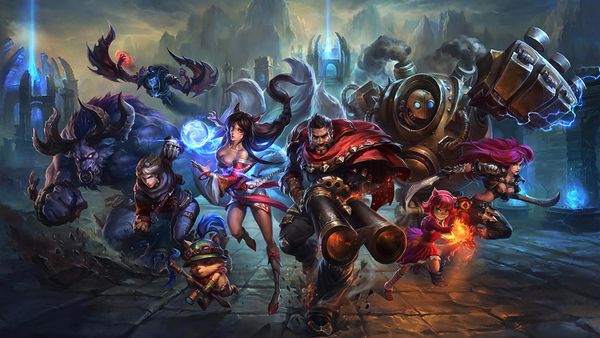 The June gloom has come and gone, and here we are with sunny skies and 10.14!

This patch, we’re here to teeter those who have been tottering, like Alistar, Kha’Zix, and Sejuani. We’re also adding an extra dash of spice (or more specifically, shadow) to a dashing assassin and shaking things up with a ferocious fighter and her blade.

There’s also been some calibrations to champions who have been consistently turning up on the (pro) scene, like Trundle and Varus, to give their peers more elbow room to take on the stage. As a result, we’re also giving special attention to a bloody beast from the belly of Bilgewater and adding more bang for his buck in the botlane (say that three times fast).

Last but not least, you may have also noticed that we've updated the Patch Highlights, an image we use to summarize all the biggest changes in a patch. Per the goals laid out in our latest Balance Framework Update, we're getting folks more informed and aware of our thinking when it comes to balance so we added more context like a key with roles and skillbands. What better place to add this information to than the image with all the important updates in any given patch. Let us know what you think!

Now go on, run your way through the rest of this patch, out on the Rift, and down your lane! We’ll see ya at the next, uh, rundown.

Take this portal if you're looking for TFT's patch notes! 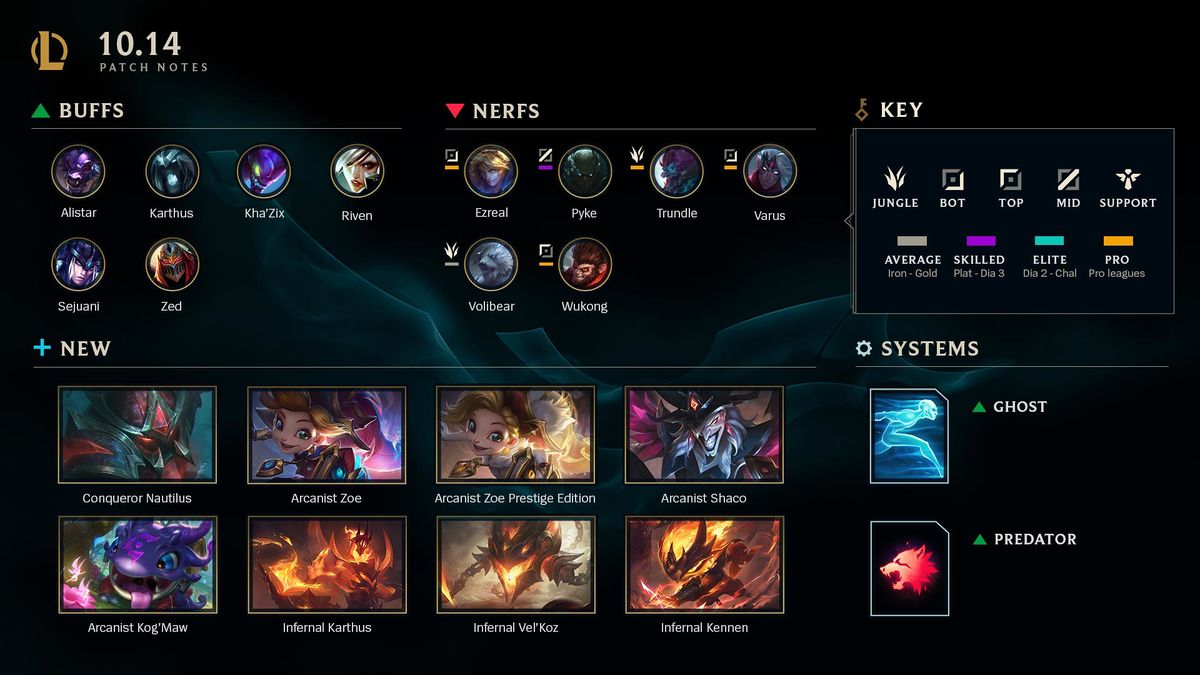 Strengthening this mighty minotaur’s disruption in extended fights by giving him more opportunities to use his fearsome fists.
Riot (Patch 10.14)

Ezreal is a bit too safe in lane and in mid and late game skirmishes for the amount of damage he puts out, so we’re reducing his ability to continuously evade attackers. We’re bringing up his cooldown but not drastically so— he still has the potential to get in a second E, but will have to be careful in playing around that vulnerability.
Riot (Patch 10.14)

Slinging more death over to the deathsinger by targeting his two main roles. With Jungle Karthus, we’re shifting some of his power against monsters to enemy champions so he feels less farming-focused. This also means the power we’re bringing to Karthus will bring some spirit back to mid lane Karthus by increasing early survivability and increasing his DPS across the board, so that he feels better equipped to lane against his peers. And as a cherry on top, we’re cleaning up E to feel more responsive and intuitive.
Riot (Patch 10.14)

We’re sharpening the claws on this bug. He's on the low end of power for Average and Skilled players, and we think a small buff can push him into a balanced spot for elite players as well. Change is good, after all.
Riot (Patch 10.14)

Aiming to pull this bloody beast away from the mid lane and boost his role as a support. As a slippery assassin, he was getting too much leeway while diving in and around his enemies. Mid Pyke is also far more capable of soaking up experience than in the bot lane. To curb these advantages, we’re bumping his armor scaling down from the literal best in class to a notch below and pulling back on his swift stalking around the map. These changes should primarily be felt in the mid lane, where Pyke accesses his later W levels much earlier to speed up his roam. In addition, we’re pumping more power into his Q so that he can fish for hooks with less punishment and harpoon it out more in the botlane.
Riot (Patch 10.14)

Due to current meta builds that simply don’t align with Riven’s playstyle, her depth and breadth of play has been suffering, and she’s been feeling a bit… exiled. We’re bringing back her edge by buffing more damage-focused Riven builds (think Essence Reaver, Youmuu’s, and Bloodthirster) over the current tankier meta ones (like Cleaver and Death’s Dance).
Riot (Patch 10.14)

E base damage increased; Frost cooldown on stunned enemy champions decreased and constant at all levels.

We've kept it cool when looking at Sejuani and Bristle due to their propensity to take over pro play. While we're still hesitant about letting them run amok, we’re letting them chill out and defrost by amping up her damage output.
Riot (Patch 10.14)

This treacherous troll has been on a particularly savage streak as he continues to tear through professional play. We’re reverting the patch 9.6 buff in the hopes that this will ice down his early game clear speed and dueling prowess.
Riot (Patch 10.14)

Along with the Troll King, Varus is also stifling pro play as the go-to blind pick (or first red side ban). Targeting his early poke to make him less effective at bullying his peers out of lane.
Riot (Patch 10.14)

This thundering beast has been in a relentless frenzy, specifically in the jungle in the average skill group. Pulling back his power in a way that will balance his clear speed and sustain as he continues to storm through the jungle.
Riot (Patch 10.14)

Wukong is a bit on the stronger side, so we’re toning down some of the AoE disruption he brings to teamfights before he spins out of control.
Riot (Patch 10.14)

We’re bringing Zed out of the shadows to bring up his higher elo power in an exciting way that gives him higher consistency in his combos and more outplay potential. Yeah, you heard us—with the landscape of the game changing drastically from season 3, we’re reverting his W speed nerf all the way back from patch 3.13 and increasing its accessibility. This should make his combos feel smoother and stronger and open more windows for shuriken shenanigans.
Riot (Patch 10.14)

Predator is still weaker than expected, so we’re continuing our fine tuning. Giving it some boosts to help it compete with other keystones.
Riot (Patch 10.14)

Our changes to Ghost in patch 10.12 ended up being a small nerf with its increased cooldown, so we’re following up with a buff to speedily move it in the right direction.
Riot (Patch 10.14)