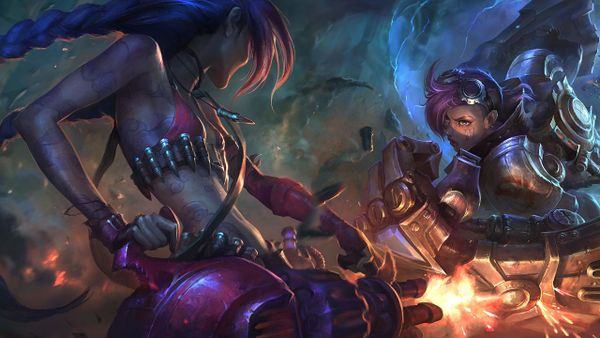 This patch, we welcome the arrival of the Spirit Blossom Festival, first with the entrance of Lillia, our brave guardian from Ionia, and then the return of Nexus Blitz (oh yes, it’s back!), all set in an ethereal realm of wondrous magic and bloom.

Then, greetings to a refreshed Swain! We’re hoping these spicy changes (higher cast cadence and huge bump up in range) will fire up his power both as a mid laner and support. We’ve also taken another pass at Aphelios to tone down his dominance and fine-tune the synergy of his Flamethrower with Runaan’s.

For the rest of our changelist, we’ve made some Pro-targeted adjustments to champions like Shen and Lee Sin to encourage more diversity in their lanes, while also nudging old friends like Caitlin and Gragas back onto the scene.

In addition, we’re giving some folks a couple visual changes and audio fixes, focusing on champions with effects that have become outdated in comparison to their newer peers.

Now, go forth. It’s your time to blossom.

Take this portal if you're looking for TFT's patch notes! 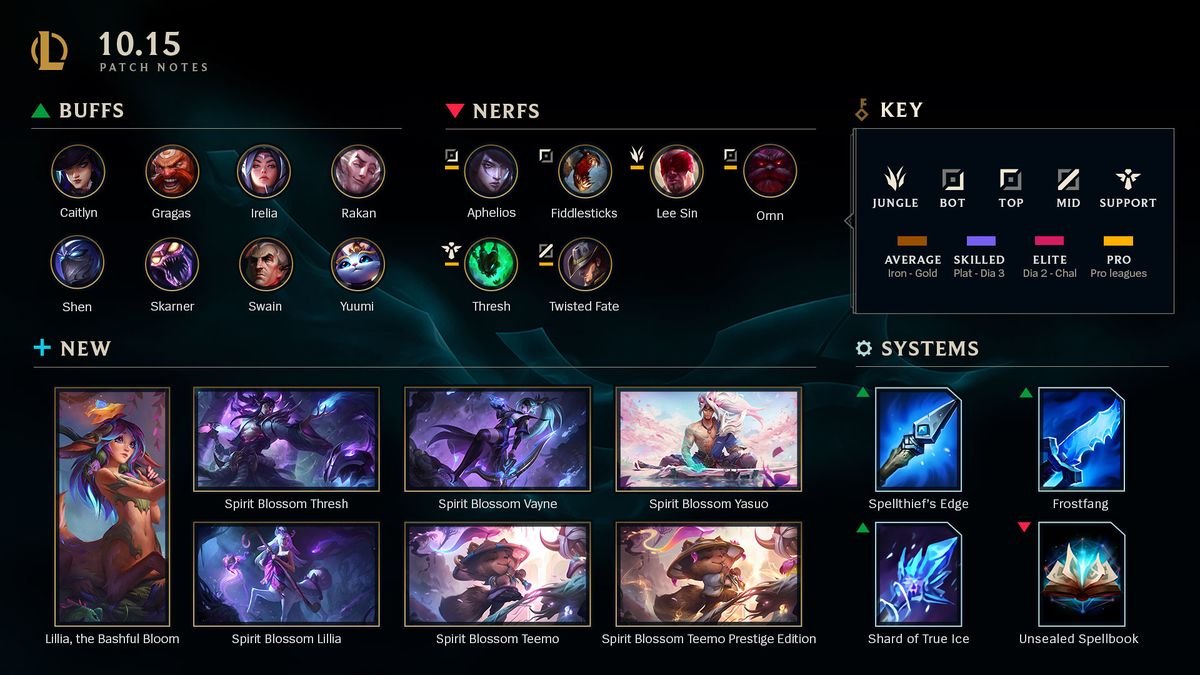 With the introduction of Clash and its unrestricted rank system for full teams of 5, we’ve decided to apply the same approach to Ranked Flex queues, allowing players to get in ranked games with their Bronze buddies, Challenger chums, or whoever!

Similar to Clash, the system will use a weighted average that leans more towards higher skill players, so be warned before attempting to drag your Bronze friends through Diamond-level games. Have fun!
Riot (Patch 10.15)

High-res version of Lillia's splashes are available on League Displays!

Lowering Crescendum turret's attack range so it provides less zone control, and slowing down its target acquisition speed so opponents can reactively play around it. The rest of the changes are aimed towards weakening Infernum’s synergy with Runaan’s Hurricane.
Riot (Patch 10.15)

Caitlyn has been out of the meta in Pro play for a very long time, and we expect her to be a reasonable fit with and against certain meta compositions. These changes should help bring her back as one of the premier early game marksmen.
Riot (Patch 10.15)

Tank Fiddle has been spooking opponents top lane, outperforming other builds (specifically AP Fiddle), and frustrating players who run into it. We don’t want to terrify the tank off the scarecrow, but with Jungle Fiddle being in a good spot, we’re hoping these changes will encourage players to indulge in the bounty of Fiddle as a mage, first and foremost.
Riot (Patch 10.15)

Aiming to rouse this liquor connoisseur to step into his role as an AP mage who can both engage fights and burst down enemies, so we’re sharpening his late-game damage.
Riot (Patch 10.15)

Our bladed dancer has been falling off in extended games at all levels of play, especially in Average MMR. Cautiously strengthening her scaling and dueling potential to help bridge the gap between laning phase to mid game.
Riot (Patch 10.15)

We can’t turn a blind eye to the fact that Lee has been a consistent threat in Elite and Pro play, so we’re increasing the cooldown on one of Lee's more reliable spells to curb his mobility and sustain throughout the game.
Riot (Patch 10.15)

Slightly taming the fire on this forger so that his enemies have more opportunities to trade back.
Riot (Patch 10.15)

We’re making Rakan’s progression across the course of a game feel smoother. This is a quality-of-life change that is also a very minor buff for this saucy showman.
Riot (Patch 10.15)

We’re bringing some power into Shen’s shield to let him scrap with meta peers more effectively, while giving him more breathing room in lane. We’re hoping this will stir up some diversity in the top lane and overall team compositions with the introduction of a second tank to the meta.
Riot (Patch 10.15)

We’re increasing the scorpion’s damage so he’s more equipped to slash through front line targets when itemizing as a bruiser (and a stinger, of course). As another flourish, we’re also making a quality-of-life change to his E.
Riot (Patch 10.15)

The general and his demon birds are performing fine in Average play, but they do worse the further up the ladder you climb. This is a pretty lengthy refresh, with a mix of buffs and nerfs, so we want to take the time to run through it.

Let’s start with the spice and everything nice: Most notably, we’re significantly increasing his W range (more than double when maxed!). We think this change will be particularly transformative for Skilled Swain players who will be able to impact other lanes from a distance all game long. In addition, we’re also bumping down the cooldown on his Q to help him fulfill his battle-mage fantasy with more casts.

As for the nerfs: to balance out the buffs, we’re pulling back on his movement speed. We’ve also removed his mana restore to skew power away from Swains in low Elo who can profit off of fewer skills dodged, when the reverse happens in higher Elos.


Overall, we’re hoping these buffs will empower Skilled players in both mid and support, with sweeping changes across the board to give him the tools he needs to feel like a more functional mid laner.
Riot (Patch 10.15)

We’re hooking some power out of Thresh’s lantern, since pros tend to max this spell earlier than the average player.
Riot (Patch 10.15)

Twisted Fate has been able to consistently reach an intimidating state where he can balance both split-pushing and global pressure in Pro and Elite play. As a result, we’re reducing his lane pressure and wave control in earlier phases of the game so that he’ll have to gamble more when picking a card (and a lane!).
Riot (Patch 10.15)

Yuumi was mush, mushed! by her E mana cost nerf in 10.13, so we’re here to follow up (and give her all the chin scratches in the process). As we mentioned in this article, we’re making her passive more important to her success in a way where she’ll need to take more risks if she wants to provide more sustain.
Riot (Patch 10.15)

Similar to the previous VFX updates we've made in the past (Ziggs, Thresh, Lux, etc.), we're working on updates to some champion ability VFX. Our aim is to get their VFX up to current League standards and improve gameplay clarity. In this patch, we'll be releasing a VFX update for Ahri and Udyr!

As a reminder, VFX updates don’t impact who gets a VGU, where we take model, gameplay, and thematic into account too. They are simply dev passion projects.
Riot (Patch 10.15)

Spellthief's line of items is being overshadowed by the Relic Shield line for AP users, especially enchanters. While it's fine if they're competitive options, the more defensive option should not always be the dominant choice.
Riot (Patch 10.15)

Unsealed Spellbook has become a dominant choice at the highest tiers of play (Pro and Elite) and often encourages minimal interactions early game. We’re reducing its power a bit so it doesn't outshine other options.
Riot (Patch 10.15)

Nexus Blitz: The Temple of the Lily and Lotus[edit]

Nexus Blitz returns with the Spirit Blossom event, now permanently set in the Temple of Lily and Lotus, a long-forgotten temple of the Canghapi vastaya! We’ve got a whole slew of events, from old favorites to brand new ones, along with new rewards, bug fixes, and quality-of-life changes.