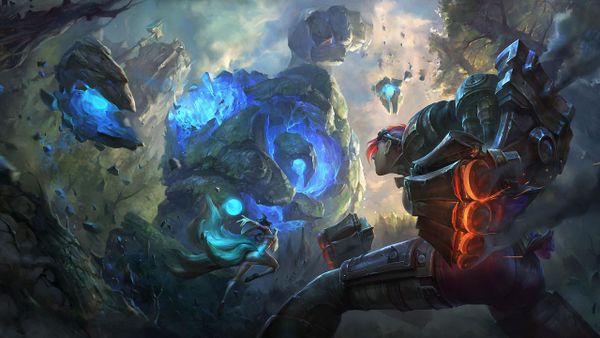 We’re back from the break, we’re blistering in this heat, and we’re bringing a brief B-side patch!

This is more of a glorified mid-patch update rather than a full patch, meaning most of the adjustments here are simple balance tweaks, and there aren’t any released skins or new content this time around. There’s also no download required, and changes will be live within a few hours of these notes going live, if you’re reading this hot off the presses (if so, hooray, settle in)!

And that’s all we’ve got! Slap on a Pool Party skin or roll around with some Poros today. We’ll see ya next patch. 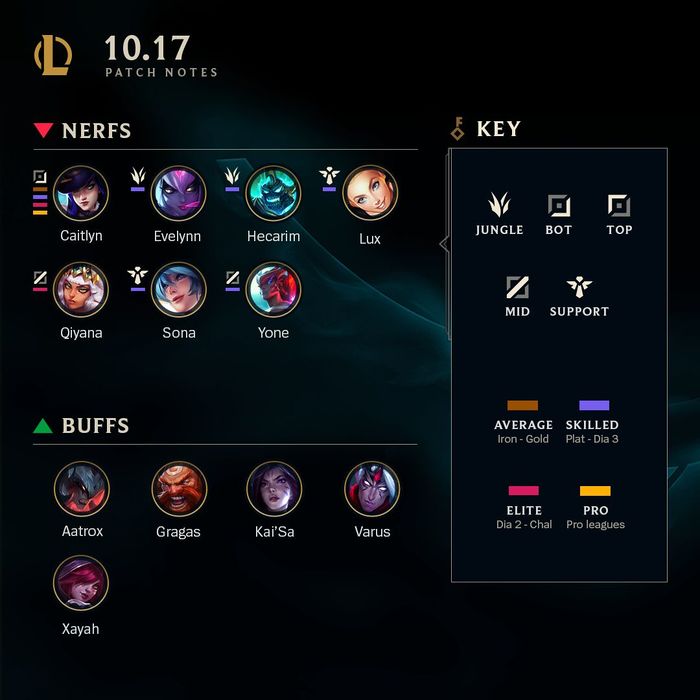 Aatrox is on the fringes of pro play, hanging on for dear life. Since he’s restrained in that MMR, he has room for us to push him into a much better state for all players.
Riot (Patch 10.17)

Caitlyn's 10.15 buffs put her in a bit too domineering of a place for both professional and regular play. Pulling back on her MS to bring her back in line, though we expect her to remain a strong pick.
Riot (Patch 10.17)

Our changes last patch gave her a lot of new power in the jungle, so we’re reeling back some of the damage that we gave her earlier in 10.8.
Riot (Patch 10.17)

Gragas has been getting thrown around by the jungle, so we’re hoping this change lets him slam right back. With more defense, it should also help out his early game exchanges in the top lane.
Riot (Patch 10.17)

Trotting back some of the changes from 10.16, which overshot our expectations, especially with Hecarim players picking up on his synergy with Phase Rush.
Riot (Patch 10.17)

Kai’Sa is struggling at all levels of play. Giving her a little bit of a supercharge to help her reach her late game potential.
Riot (Patch 10.17)

Lux support, especially with an early shield max, has gained a lot of traction as of late. To curb the oppressive playstyle of just spamming her shield in lane, we’re targeting its power when maxed first, while avoiding hurting her more damage-oriented builds. Also, bugfix for a shieldfix!
Riot (Patch 10.17)

Qiyana has been riding a high wave in elite play, and although we’ve been able to avoid nerfing her due to her lack of presence in pro, the tide’s turned this time.
Riot (Patch 10.17)

Sona’s power has reached a crescendo as a support and bot lane carry across skilled, elite, and average levels of play. We can’t keep babying our baby girl any longer—we’re toning down her power by bringing down her scaling.
Riot (Patch 10.17)

Base AS growth increased.

Our last wave of changes in 10.14 knocked Varus completely out of the meta. He’s in a weak spot at all levels of play, so we’re cautiously giving him a helping hand.
Riot (Patch 10.17)

Xayah has been struggling to keep up with her counterparts, so we’re fluffing up her feathers and giving her a little more swish as the game progresses.
Riot (Patch 10.17)

While not currently overpowered, we expect Yone isn’t long-term balanced and will continue to grow from where he is—and where he is the strongest.
Riot (Patch 10.17)