Hi! The Worlds patch is here, a new markswoman is here, you’re here...it’s a dang party!

The world itself has been a little topsy-turvy, but there’s nothing crazy here, we promise. This patch is focused on tidying things up for the championship, which means levelling the playing field so that not one figure is dwarfing the rest (here’s looking at you, Caitlyn). This also means we’re giving a bit of a kick to some friends to, well, kick them into gear and into the competitive spotlight. These buffs are mostly geared towards marksmen, junglers, and mid laners, in the hopes of mixing things up a tad for our biggest tournament of the year!

And finally, a warm welcome to Samira, who can slice and dice (and blast) it up in the bot lane. I mean, she’s got an eye patch and everything. 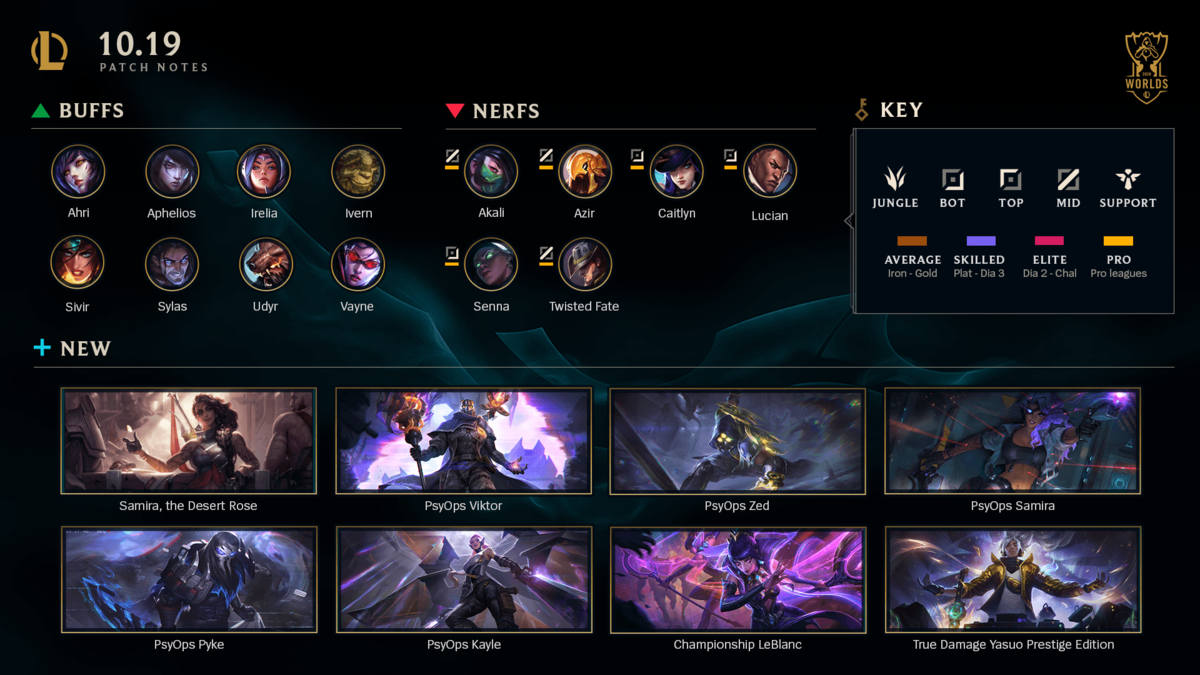 High-res version of Samira's splashes are available on League Displays!

The changes to Ahri in patch 10.18 were a little too cautious in terms of power. Giving her some strength back by firing up her W to make it feel more satisfying.
Riot (Patch 10.19)

We’ve been seeing an increase in Akali’s presence in Pro since our buffs in 10.16. We’re reverting our past changes (10.16 and 10.12) on her to make sure this deadly assassin doesn’t completely dominate the meta at Worlds.
Riot (Patch 10.19)

Our moonlight man was nudged out of the Pro meta through consistent nerfs. It’s time to restore some faith to his weapons.
Riot (Patch 10.19)

Azir has (a)risen to the upper tier of mages in Pro play, and has become the de facto option for scaling compositions. Since pro players are able to get more 3-soldier autos off than in lower MMR (thus proccing doubled bonus attack speed), we’re bringing down the ratio.
Riot (Patch 10.19)

Base AD and AS growth decreased.

Caitlyn has been dominating and we're not confident that even with our previous nerfs there'd be a level playing field. It feels bad to put extra cuffs on the sheriff, but it seems it's prudent in order to open up bottom lane diversity for our most important tournament.
Riot (Patch 10.19)

Irelia carries her blades with grace, but could also carry more power. We’re strengthening her ultimate to help her slice and dice things up as the game progresses.
Riot (Patch 10.19)

Ivern has seen little play in Pro games despite holding his own in other skill brackets. This change encourages Ivern to work with his friends to catch up to their enemies.
Riot (Patch 10.19)

Similar to Akali, Lucian is trending towards becoming an overbearing flex pick at Worlds. Since a large reason for this is due to his solo lane prowess, we’re reining that in by lowering his experience scaling.
Riot (Patch 10.19)

Senna has been stepping into the limelight, both as a bot lane carry and as a utility-first marksman in the Pro meta. We’re reducing her scaling via Mist Wraiths to grant more leeway to other traditional hypercarries.
Riot (Patch 10.19)

Sivir’s fallen off the radar, so we’re increasing her ability to hunt down enemies in the hopes that she boomerangs back into power.
Riot (Patch 10.19)

Sylas has been shackled in Pro play due to having a weaker laning phase and stronger counterpicks. This will allow us now to amplify his real niche of snatching an ultimate here and an ultimate there, which means...he's getting Hijacked up.
Riot (Patch 10.19)

Twisted Fate remains a meta-driving force in Pro play as a safe roamer, so we’re paring down some of that.
Riot (Patch 10.19)

Tiger Stance tends to be the go-to for Udyr players, so we’re giving a bit more bite (and burn) to his Phoenix Stance and its AoE damage playstyle.
Riot (Patch 10.19)

Vayne has been in the shadows as of late and hasn’t been succeeding in places she traditionally has, so we’re heightening Vayne's window of power by letting her excel in the moments you pick her for.
Riot (Patch 10.19)

One For All Balance Changes[edit]