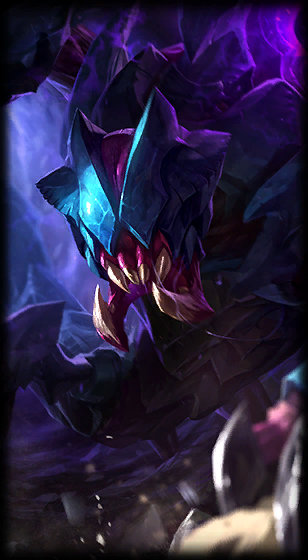 “Fear not ambush from the hills, nor winged beasts from the skies. The true terror of Shurima comes from the sand, and gives no warning of her presence.”
~ Sivir
Champion Information
Region

W
Ability
No Target
Affects
Self and Enemies
Damage Type
Physical
Rek'Sai burrows into the ground, gaining new abilities and increased Movement Speed. Her vision range is reduced and she cannot use basic attacks.

While Burrowed, Rek'Sai may cast Un-burrow to knock up and damage nearby enemies.
Furious Bite / Tunnel

While Burrowed, Rek'Sai creates a re-useable, long lasting tunnel. Enemies can destroy it by standing on top of either entrance.
Void Rush

R
Ability
Passive
Unit
Affects
Enemies
Damage Type
Physical
Rek'Sai passively marks targets by damaging them. She can activate this ability to become briefly untargetable and lunge at a marked target for heavy damage based on their missing health.
100 / 90 / 80

An apex predator, Rek’Sai is a merciless Void-spawn that tunnels beneath the ground to ambush and devour unsuspecting prey. Her insatiable hunger has laid waste to entire regions of the once-great empire of Shurima—merchants, traders, even armed caravans, will go hundreds of miles out of their way to avoid her and her offspring’s hunting grounds. All know that once Rek’Sai is seen on the horizon, death from below is all but guaranteed.

The largest and fiercest of her species, Rek'Sai is a merciless predator that tunnels through the earth to ambush and devour her prey. Her insatiable hunger has laid waste to entire regions of the once-great Shuriman empire. Merchants, traders and armed caravans will go hundreds of miles out of their way to avoid these vast areas, though cunning bandits have been known to lure the unwary into her killing grounds. Once Rek'Sai detects you, your fate is sealed. There is no hope of escape; she is death from below the sand.