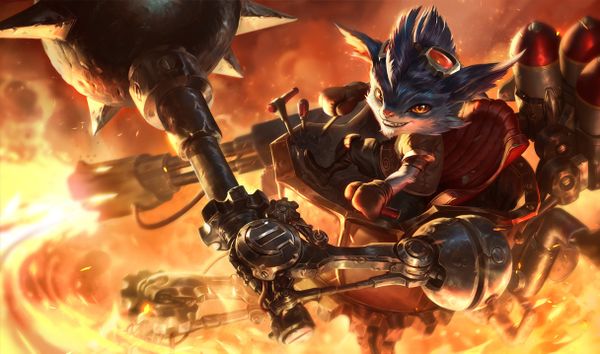 "Ugh, it's gonna take forever to scrape your face off my suit!"
Champion Information
Region

Rumble is a young inventor with a temper. Using nothing more than his own two hands and a heap of scrap, the feisty yordle constructed a colossal mech suit outfitted with an arsenal of electrified harpoons and incendiary rockets. Though others may scoff and sneer at his junkyard creations, Rumble doesn't mind—after all, he's the one with the flamespitter.

Even amongst yordles, Rumble was always the runt of the litter. As such, he was used to being bullied. In order to survive, he had to be scrappier and more resourceful than his peers. He developed a quick temper and a reputation for getting even, no matter who crossed him. This made him something of a loner, but he didn't mind. He liked to tinker, preferring the company of gadgets, and he could usually be found rummaging through the junkyard.

Rumble showed great potential as a mechanic, and his teachers recommended him for enrollment at the Yordle Academy of Science and Progress in Piltover. He may very well have become one of Heimerdinger's esteemed proteges, but Rumble refused to go. He believed that Heimerdinger and his associates were sellouts trading superior yordle technology to humans for nothing more than a pat on the head while yordles remained the butt of their jokes.

When a group of human graduates from the Yordle Academy sailed to Bandle City to visit the place where their mentor was born and raised, Rumble couldn't resist the temptation to see them face-to-face (so to speak). He only intended to get a good look at the humans, but four hours and several choice words later, he returned home bruised and bloodied with an earful about how he was an embarrassment to enlightened yordles like Heimerdinger.

The next morning, Rumble left Bandle City without a word, and wasn't seen again for months. When he returned, he was at the helm of a clanking, mechanized monstrosity. He marched it to the center of town amidst dumbfounded onlookers and there announced that he would show the world what yordle-tech was really capable of achieving.

Passive
Ability
Passive
Affects
Self
Damage Type
Magical
Every spell Rumble casts gives him Heat. When he reaches 50% Heat he reaches Danger Zone, granting all his basic abilities bonus effects. When he reaches 100% Heat, he starts Overheating, granting his basic attacks bonus damage, but making him unable to cast spells for a few seconds.
Flamespitter

Q
Ability
Direction
Affects
Enemies
Damage Type
Magical
Rumble activates his flamethrower for 3 seconds, granting 20 Heat and dealing magic damage every 0.25 seconds to all enemies in a cone in front of him. Deals reduced damage to minions.
10/9/8/7/6
Scrap Shield

W
Ability
No target
Affects
Self
Rumble pulls up a shield for 1.5 seconds.
While shielding himself Rumble gains bonus movement speed until the duration of the shield ends or the shield is broken.
6
Electro Harpoon

E
Ability
Direction
Affects
Enemies
Damage Type
Magical
Passive: Rumble stores an Electro Harpoon charge periodically (up to 2 at once). Charges stored prior to reaching 100 Heat can be used while overheated.
Active: Rumble shoots a harpoon, dealing magic damage to the first enemy hit and slowing them for 2 seconds. Hitting the same target with another harpoon enhances the slow (stacks additively).
6
The Equalizer

R
Ability
Vector-targeted
Affects
Enemies
Damage Type
Magical
Rumble deploys a barrage of rockets 1000 units down the target path, landing in a line over 1 second and lasting for 5 seconds.

Enemies within the line of rockets take magic damage every half-second and are slowed by 35%. After leaving the area the damage will linger for 1 second.
110/100/90