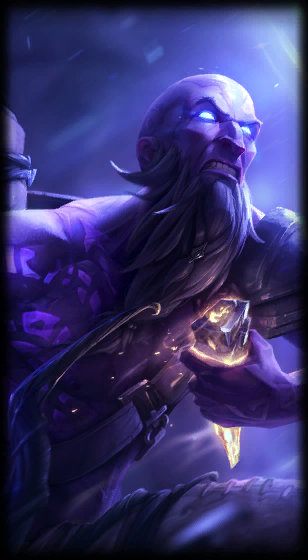 “Take care with this world. What is made can be unmade.”
~ Ryze
Champion Information
Region

Passive
Ability
Passive
Affects
Enemies and Self
Damage Type
Magic
Ryze's spells deal extra damage based on his Bonus Mana, and he gains a percentage increase to his maximum Mana based on his Ability Power.
Overload

On cast, Ryze throws a charge of pure energy in a line, dealing damage to the first enemy struck. If the target has Flux on it, Overload deals extra damage and bounces to nearby enemies with Flux.
6
40 / 38 / 36 / 34 / 32
Rune Prison

On cast, Ryze creates a portal to a nearby location. After a few seconds, allies standing near the portal are teleported to the target location.
210 / 180 / 150
100

Widely considered one of the most adept sorcerers on Runeterra, Ryze is an ancient, hard-bitten archmage with an impossibly heavy burden to bear. Armed with immense arcane power and a boundless constitution, he tirelessly hunts for World Runes—fragments of the raw magic that once shaped the world from nothingness. He must retrieve these artifacts before they fall into the wrong hands, for Ryze understands the horrors they could unleash on Runeterra.

Ryze was just a young apprentice when he first learned of the arcane powers that had shaped the world.

His master, a sorcerer named Tyrus of Helia, was a member of an ancient order whose mission had been to gather and protect the most dangerous artifacts in Runeterra. Ryze overheard Tyrus speaking in hushed tones with another mage, discussing something called “World Runes.” When Tyrus noticed his apprentice, he abruptly ended the conversation, tightly clutching the scroll that never left his side.

In spite of the order’s best efforts, knowledge of the Runes began to spread—few could even begin to understand their importance, or the sheer power held within them, and yet all saw them as weapons that could be turned against their rivals. Ryze and Tyrus traveled between the various peoples of Valoran, trying to quell paranoia and encourage restraint. But over time, their missions became increasingly precarious, and Ryze could sense his master’s growing desperation. Finally, in the Noxii territories where Ryze was born, the first cataclysmic blow was struck in what would eventually be known as the Rune Wars.

Two nations were pitted against one another, and tensions were running high. Tyrus pleaded with their leaders in parley at the village of Khom, but he saw this conflict had already escalated beyond his ability to mediate. Fleeing into the hills, he and Ryze bore horrified witness to the destructive power of the World Runes firsthand.

The earth fell away beneath them, the bedrock itself seeming to retch and squeal, while the sky above them recoiled as if mortally wounded. They looked back upon the valley where the rival armies had stood, and beheld insanity—destruction on a scale so massive that it defied all physical sense. The buildings, the people, all were gone, and the ocean, once a day’s journey to the east, now rushed to meet them.

Ryze fell to his knees and stared into the great hole torn in the world. Nothing remained. Not even the village he once called home.

Open warfare soon raged across Runeterra. Ryze felt compelled to join the conflict, to pick a side and lend his magical strength to the cause, but Tyrus stayed his hand. The two of them had to guide others back toward peace, and pray there was anything left of the world by the time it was all over.

Wherever they met those who held the World Runes, Tyrus pleaded for restraint. Many were deeply sobered by the threat of total annihilation—indeed, those who had already suffered most bitterly in the war might have agreed to turn over their Runes to him, and yet none of them wished to be the first to do so.

As time passed and the conflict spread, Ryze noticed his master growing more distant. While Tyrus attended clandestine meetings with great leaders and archmages, he sent his apprentice on errands that seemed of little importance, often for many weeks at a time. Eventually, Ryze decided to confront him and, to his horror, discovered that Tyrus of Helia had secretly come into possession of not one Rune, but two.

Bitter and angry, the older mage insisted that common mortals were like reckless children, toying with powers they did not understand. He would no longer play diplomat to ignorant power-mongers. He had to stop them. Ryze tried to reason with Tyrus, but it was no use—before him stood a flawed man, susceptible to the same temptations as those he decried. The allure of the Runes had left its mark upon him. Where once he desired only peace, now he had the means to bring about the end of all things. Ryze had to act, even if it meant destroying his only true friend and ally in the world.

In an instant, he unleashed all the magic he could muster. A moment later, Tyrus’s corpse lay smoldering on the floor.

Ryze trembled as his mind struggled to process what he had done. If these deadly artifacts could corrupt a mage with the strength and integrity of Tyrus, how was Ryze to handle them? At the same time, he knew he could not entrust them to any other living soul...

Soon, the greatest civilizations all but destroyed one another, ending the war. Ryze now understood the task he had inherited—as long as any World Rune remained unsecured, Runeterra was surely doomed. This knowledge was to become a lonely burden indeed, for ever since that day he has scoured the world in search of the last remaining Runes. He continues to reject the promise of power within each one, choosing instead to bind them in secret locations, far from prying and greedy eyes.

Even with his life abnormally prolonged by the magic he is exposed to, Ryze cannot afford to rest, for rumors of the World Runes have begun to emerge once more, and the peoples of Runeterra seem to have forgotten the price of wielding them.