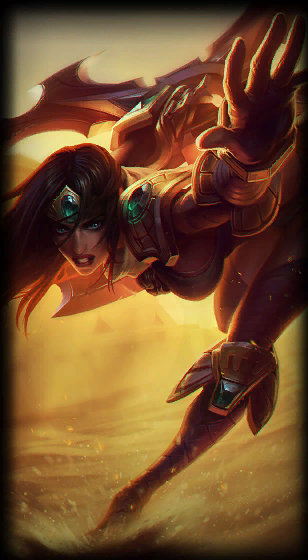 "Coin may buy you skill for a day, but never loyalty."
Champion Information
Region

Sivir is a renowned fortune hunter and mercenary captain who plies her trade in the deserts of Shurima. Armed with her legendary jeweled crossblade, she has fought and won countless battles for those who can afford her exorbitant price. Known for her fearless resolve and endless ambition, she prides herself on recovering buried treasures from the perilous tombs of Shurima – for a generous bounty. With ancient forces stirring the very bones of Shurima, Sivir finds herself torn between conflicting destinies.

Sivir learned firsthand the harsh lessons of desert life when her entire family was killed by marauding Kthaons, one of Shurima’s most feared raider tribes. In the weeks and months after the massacre, she survived by stealing food from local markets and exploring deserted ruins in search of trinkets to sell.

Most of the ruins had long since been picked clean by thieves, but Sivir excelled at unearthing treasures others had missed. With her keen eye and relentless determination, she exposed secret passageways, solved ancient puzzles to reveal hidden catacombs, and dodged perilous traps.

Occasionally, she persuaded other children to help her plunder tombs that would be impossible to loot alone. Armed with no more than coils of rope and candles, the malnourished waifs would descend into the cramped tunnels beneath the ruins in search of anything worth selling.

One day, Sivir and her compatriots ventured deep into a secret tomb she swore was filled with riches beyond imagining. After many hours of exploration, they finally discovered a hidden doorway, but were crushed to find nothing more than an empty chamber. Enraged at their wasted effort, Mhyra, Sivir’s oldest companion, demanded she forfeit her role as leader. Sivir refused, and a vicious fight ensued. Mhyra was larger and stronger, and quickly overpowered Sivir before pushing her off a ledge. Hours later, Sivir awoke alone in the dark. Fighting back panic, she retraced her steps, blind and feeling her way slowly back to daylight. Once she returned to her lair, she found her traitorous friend had fled, taking everything Sivir owned with her.

Sivir swore she would never allow herself to be betrayed again. Determined to learn to defend herself, she joined a band of sellswords led by the legendary Iha Ziharo, serving as a weapon carrier, navigator, and dogsbody for the belligerent mercenaries.

For years, Sivir slept with a dagger tucked under her blanket. She placed no trust in Ziharo’s warriors, knowing their only loyalty was to coin, but she strived to learn all she could. Sivir trained to fight, practicing with staunch determination and sparring against the younger sellswords daily.

Sivir’s unwavering dedication and swift-growing skill caught the eye of Iha Ziharo herself, who took Sivir under her wing - an honor few received. Over the years, Sivir became a formidable warrior, and as Iha’s sergeant, she fought against numerous armies, raiders and warring tribes. When the wars ended and the mercenaries struggled to find paying work, Sivir led expeditions into the ruins in search of Shurima’s lost treasures.

Eventually, Sivir tired of living in Ziharo’s shadow. The domineering leader took the greatest share of the gold, and all the glory - though it was Sivir’s knowledge of Shuriman tombs that brought them much of their wealth. Worse, Ziharo refused to fight for warlords whose reputations for cruelty were at odds with her martial code of honor. But to Sivir, gold was gold, no matter how bloody the hands that paid it - morals played no part in the transaction.

Many of the mercenaries agreed with Sivir and plotted with her to replace Ziharo as leader. The night before their coup, Ziharo learned of the plan. Outraged, she struck first, planning to turn her blade on her former student as she slept. Sivir had expected such an attack, and defeated Ziharo in a vicious knife brawl. Nevertheless, she was surprised to find she couldn’t kill her former mentor, remembering how Ziharo had taken her in when she was no more than a bitter girl with nothing to her name. Instead, she left Ziharo alone in the desert with a half-filled waterskin, a single coin and a hollow offer of good luck.

Sivir’s warband quickly earned a fearsome reputation as warriors of renown and explorers who could find relics that had passed into legend. Desert barons, wealthy merchants and collectors of the arcane commissioned Sivir to fight their wars or recover rare, hidden treasures. Explorers willingly paid Sivir’s high price for her skill in traversing dangerous territories and navigating the ancient ruins of Shurima. Ruling chieftains hired her company to defend their lands against raiding Noxians, while warlords procured their services early in their campaigns to ensure a swift victory.

In the Year of a Thousand Storms, the lord of an ancient Shuriman city known as Nashramae hired Sivir to seek a unique cross-shaped blade he claimed was a lost heirloom. He sent his personal guards along with her to guarantee its retrieval, and after a search that lasted many months, Sivir finally located the weapon. She pried it from the sarcophagus of a long-forgotten hero buried beneath tons of collapsed rubble with a strange sense that her entire life had been leading up to this moment. The weapon shone with gold and emeralds, and though it was ancient, its edge was as sharp as if it had been forged that day.

Sivir was transfixed by the crossblade, feeling as if it had been waiting for her. When the captain of the Nashramae guard demanded they return to their lord with his prize, Sivir knew she could never give it up. Sivir threw the crossblade in a curved arc, and marveled as it decapitated not only the captain, but the three men behind him before returning to her hand. Never had a weapon felt so natural in her grip, so powerful to throw. She fought her way from the tomb to emerge triumphant with the Lord of Nashramae’s men dead behind her.

Tales of Sivir’s exploits and ferocity in battle were already well-known within Shurima, but as her legend grew, her reputation spread beyond even the desert lands. In Noxus, stories of her deeds reached the ears of Cassiopeia, an ambitious noblewoman who desired a relic she believed was hidden in the heart of the desert. Cassiopeia had no shortage of coin, and hired Sivir as her guide to plunder the depths of the long lost capital of Shurima.

Though she instinctively distrusted Cassiopeia, Sivir was not about to dismiss such a profitable expedition. As they plunged deeper into the twisting catacombs of the buried city, many of Sivir’s mercenaries were killed by a slew of deadly traps, but Cassiopeia refused to turn back. After days of endless descent into darkness, Sivir and Cassiopeia finally reached a great bas-relief depicting ancient emperors and Ascended warriors with bestial heads. Most of the buried structures they had seen were shattered from millennia spent beneath the sands, but this wall was uncannily intact. Sivir felt her blood stir as she gazed at the carvings, mesmerized by a creeping sense of recognition. In that moment of inattention, her fate was sealed.

Taking advantage of Sivir’s distraction, Cassiopeia stepped in close and rammed a blade through her back. Sivir collapsed in agony, her lifeblood soaking into the sand. Cassiopeia pried Sivir’s crossblade from her grasp as her senses dimmed like a guttering candle. As warmth faded from her body, death closed in.

But fate was not yet done with Sivir. As her lifeblood drained, her ancestor, the long-dead emperor Azir, was resurrected by the echoes of royalty within her blood. He carried her body to the Oasis of the Dawn, a sacred pool once brimming with healing waters. Bone-dry for thousands of years, it now overflowed with crystal water at Azir’s presence. The healing waters enveloped Sivir’s body, miraculously undoing the fatal wound dealt to her by Cassiopeia.

With a labored gasp, Sivir opened her eyes, dazed and uncomprehending, as if dragged from a dream. A vaguely familiar face looked down at her with kindness, and Sivir blinked, unsure if she was alive or dead. All around her, spirals of dust whirled hundreds of feet in the air forming towering palaces, ornate temples, and expansive plazas. The ancient city of Shurima rose from its sandy grave in all its glory and splendor, crowned by an enormous golden disc shining brighter than the noonday sun. With Azir’s return, the ancient city was restored to its former majesty.

Sivir had grown up hearing tales of the legendary Ascended, but thought only children and fools believed in such fantasy. Surrounded by a city that, stone by stone, restored itself from nothing, and confronted by a long-dead Emperor who spoke of his enduring bloodline and vision of a reborn kingdom, Sivir was shaken to her core. Everything she had ever believed in was cast into doubt.

With his words still ringing in her ears, she retreated to her life as a mercenary, taking solace in the everyday realities of fighting for coin. She struggled to accept she might be the heir to a forgotten empire, and tried to put such thoughts out of her mind. Even if everything Azir said were true, she was sure no one could unite the disparate tribes of Shurima. The most powerful warlords could command small territories for a time with enough gold and warriors, but the land would never rally beneath a single banner, let alone bow to one man - even if he truly was an ancient emperor.

As Azir strives to reestablish his once-mighty empire, Sivir is tormented by increasing doubts as to whether she can fully return to her former life. Looming forces encroach upon her world, and for better or worse, fate has given her a second chance at life.

Now she must choose her path, and forge a new legacy.