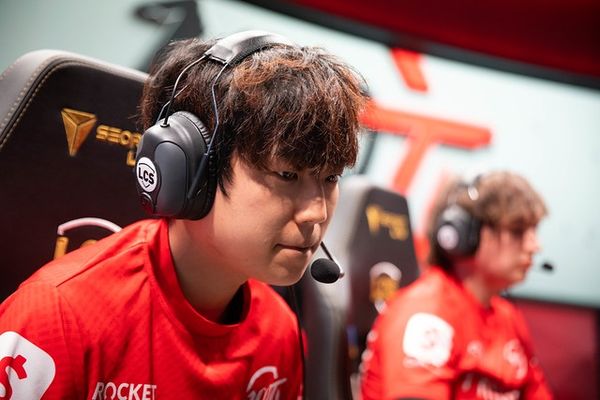 Kim "Ssumday" Chan-ho (born July 3, 1996) is a South Korean player who is currently playing as a Toplaner for 100 Thieves.

In 2015, the KT Rolster rosters merged to form just a single roster. Ssumday became their toplaner, but the team failed to make playoffs in the LCK 2015 Spring season. The team managed to qualify for Worlds 2015 in the summer, bringing Ssumday to his first international tournament. KT Rolster placed top 8, losing against country mates KOO Tigers, who would go on to become 2nd in the tournament.

Ssumday stuck to KT Rolster for 2016, placing 3rd and 2nd in the two splits, but eventually falling short in the Regional Finals with a loss against the eventual world champions Samsung Galaxy. He would move to North America in the next season, with his last tournament result in Korea being the 2016 KeSPA Cup, in which the team got invited to the playoffs but was immediately eliminated by Kongdoo Monster.

Ssumday became Dignitas' toplaner in 2017, placing 5-6th in his NA LCS Debut season. The team made a single change heading into summer, replacing Xpecial with Big, but was unable to get further than 4th place in both the Summer season and the regional playoffs. Despite that, Ssumday stood out and won the 1st All-Pro Team award.

With the NA LCS moving to a franchised format, Ssumday left Dignitas to join 100 Thieves. They made the finals in their debut season, with the public seeing them as a middle of the pack team. This resulted in another award for Ssumday, being voted into the 3rd All-Pro Team. In summer, 100 Thieves went through various struggles, with jungler Meteos leaving the team, and Rikara eventually stepping into the place of Cody Sun. Despite that, Ssumday secured the 1st All-Pro Team award and the team managed to place 4th in the season, securing them a slot for Worlds 2018. 100 Thieves placed 9-12th, only winning against the Taiwanese G-Rex.

In the following seasons, 100 Thieves failed to impress, placing 10th in the 2019 Spring Split, and after a 1-5 start in the 2019 Summer split, Ssumday was relegated to the 100 Thieves Academy roster to make space for FakeGod. This decision was made based on the mid-lane performance, and import regulations wouldn't allow Ryu to be part of the team without a different import leaving the roster. 100 Thieves Academy managed to win the 2019 Summer academy league, giving Ssumday his first championship in 5 years as a consolation prize for the rough season. 2020 wasn't much better, but despite a 5-6th and 7-8th placement in the 2020 season, Ssumday was highly regarded as one of the best toplaners in the league.

In 2021, Ssumday was joined by 4 former Golden Guardians members, they made the semi-finals of 2021 Lock-In tournament, and placed 4th in the 2021 Spring season following defeats against Cloud9 and TSM in playoffs. In Summer, 100 Thieves placed second in the regular season and in the playoffs they beat Evil Geniuses, Cloud9 and eventually Team Liquid to take the LCS title. This gave Ssumday his first top level title since Champions 2014 Summer Split and making 100 Thieves the 5th ever organization to win the LCS.